HomeMachinery/EquipmentLabelingFood labels need to adapt to shifting consumer preferences
Recent
Unexpected Whiskey Packaging is for the Birds
May 18, 2022
Breaking News in Flexible Packaging
May 18, 2022
Best in New Food and Beverage Packaging
May 18, 2022
A Sustainability Story Hiding in the Cereal Aisle
May 18, 2022
What’s Next in Digital Printing of Beverage Cans
May 17, 2022
New Thermoforming Machine Optimizes Mono-Material Processing in Modular Design
May 16, 2022
NFT Packaging Opens the Door to the Metaverse
May 13, 2022
Scientists Detect Microplastics in Human Blood
May 13, 2022 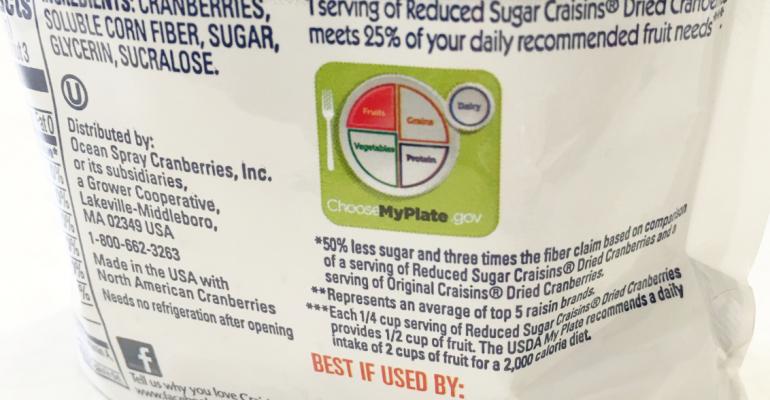 Today, consumers are interested in information about ingredients on food labels and other health-related data.

While grocery shoppers continue to seek tasty, nutritious and safe food, the impact of food labels appears to be waning, according to Mintel’s Food Packaging Trends: Spotlight on Food Labeling report.

In 2015, less than half of U.S. consumers indicated they “usually read” the information on product labels, and the percentage of consumers who indicate doing so declined in the several years prior.

So just what are consumers looking for on food labels? Seventy percent of grocery shoppers look for ingredients listed on food packaging. Such a high response rate is a clear indication that positioning key or functional ingredient information prominently on pack should be a priority for brands.

Whereas many foods touting their healthy attributes have been accentuating what could be termed a value-add (such as added protein, fiber and omega-3s), consumers are more likely to equate healthy with “natural,” “clean” and what they would describe as “real” foods, according to the report. On-pack messaging that helps this next generation of shoppers navigate healthy food choices will be paramount to driving future sales.

Two thirds of grocery shoppers who prioritize low price look for the expiration date on food items, and 55% of this group looks for brand. Such factors appear as cost savers for those who are conservative about food spend, assuring reliable products that will not spoil before they are used.

Generationally, younger shoppers are much less likely than older ones to rely on ingredients lists. Instead, they seek the assurance of product descriptors, such as “natural” and “organic.” Mintel’s Free-from Food Trends report finds the interest in a healthier lifestyle is particularly compelling to Millennials with families, and a number of Millennial parents are heeding the advice of healthcare professionals to eliminate certain ingredients from their diet. Nevertheless, among Millennial parents who purchase foods bearing a “free-from” claim, that purchase decision is largely fueled by an interest in avoiding what they regard as unnecessary ingredients, rather than what’s included.

A quarter of the oldest shoppers Mintel measured say on-pack brand/product history is unnecessary. In contrast, iGen/Millennials are more likely than other generation groups to say this information is important, influential and trustworthy. Mintel’s Marketing to US Millennials report finds that, though Millennials never forget they are being sold to, they are willing to set cynicism aside when they perceive companies are sincere. Brands that resonate with Millennials are often those that incorporate values into their corporate identity. Such a response is an indication that story may play a larger role in food sales moving forward, especially for this demographic.

Seals and third-party certifications from organizations lead on-pack indicators for trustworthiness. A trend Mintel has identified as the Decline of Deference discusses that distrust of business and other institutions has soared to all-time high levels, creating fertile ground for creative disruption. Seals that appear to vouch for a product from an outside source, rather than requiring shoppers to take the manufacturer’s word for it, can be considered trustworthy.

Natural positioning is of interest to those who seek high-quality products, as well as to those who are interested in food safety. Ingredient source information also appears useful to those for which food safety is a driving purchase factor.

Less than half of iGen/Millennials say Nutrition Facts panels are informative, and less than one third say they influence their food purchase. While regulations require this information to be included on-pack, resonating with future generations of shoppers will require further efforts.

Recent changes to the Nutrition Facts label found on food packages in the U.S. are aimed at reflecting how people eat and drink today, according to the FDA. However, Mintel’s packaging analyst team believes the SmartLabel mobile initiative (smartlabel.org) may be a more modern and and effective means to communicate with today’s mobile-savvy shoppers and consumers.

SmartLabel was created by a group of consumer companies and retailers formed by the Grocery Manufacturers Assn. and the Food Marketing Institute’s Trading Partner Alliance (TPA). SmartLabel connects consumers, via mobile devices, to food and household product information—from ingredients to nutritional information to allergen facts to third-party certifications. SmartLabel even includes a quick-access glossary of terms, making it possible for consumers to really understand what’s behind ingredients.

SmartLabel even makes it possible to contact participating companies directly with more questions. More than 30 major companies—including Hershey, General Mills, Campbell Soup and Unilever—have already committed to using SmartLabel and the number of products providing ingredient information in the consistent SmartLabel format will continue to grow to more than 34,000 by the end of 2017.

This article was written by David Luttenberger and Beth Bloom. Luttenberger is the global packaging director at Mintel. He has 24 years’ packaging experience. He can be reached at [email protected] You can also follow him on Twitter at @packaginggeek. Beth Bloom is a senior food and drink analyst at Mintel. 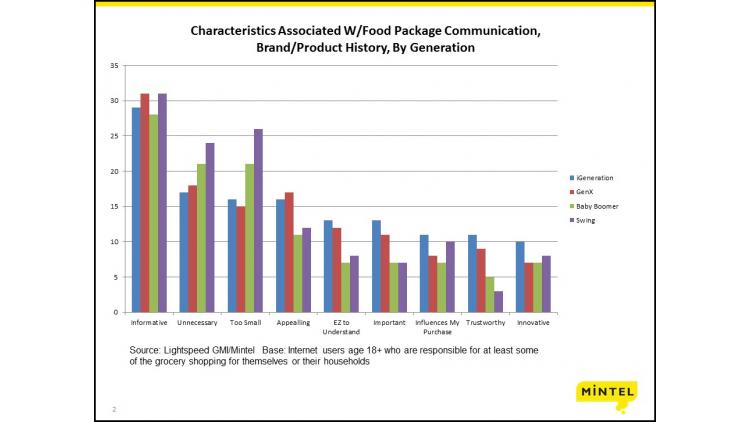 All generations agree that food labels should be "informative." 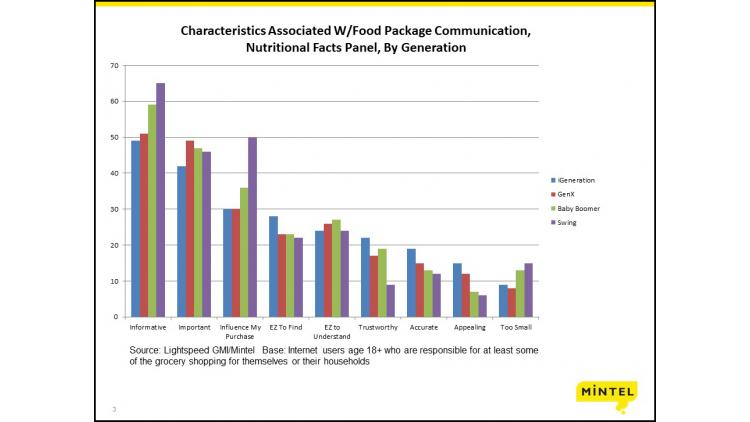 When it comes to aiding in purchase decisions, the oldest shoppers are most influenced by the Nutrition Facts information on food and beverage packages. 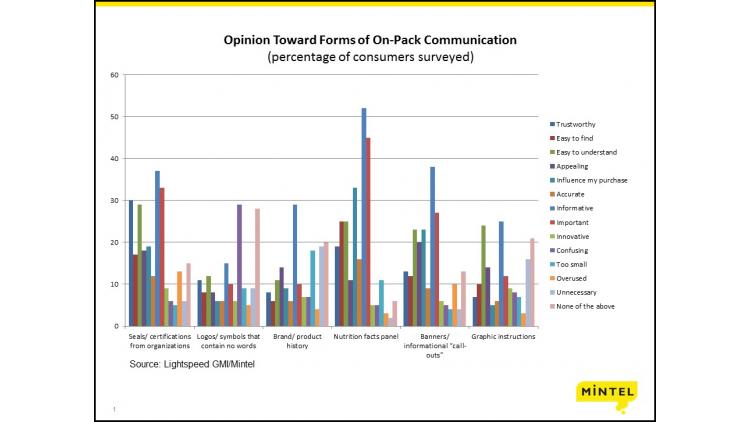 Banners/informational "call-outs," as well as seals/certifications, on a package help influence shoppers to buy. 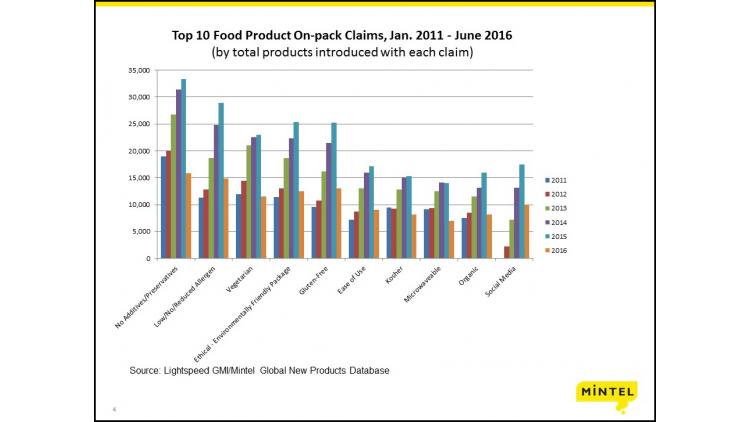 Referencing "Ethical or Environmentally Friendly Packaging" on the package is the fourth highest claim for the last five-plus years, behind "No Additives/Preservatives," "Low/No/Reduced Allergan" and "Gluten Free."