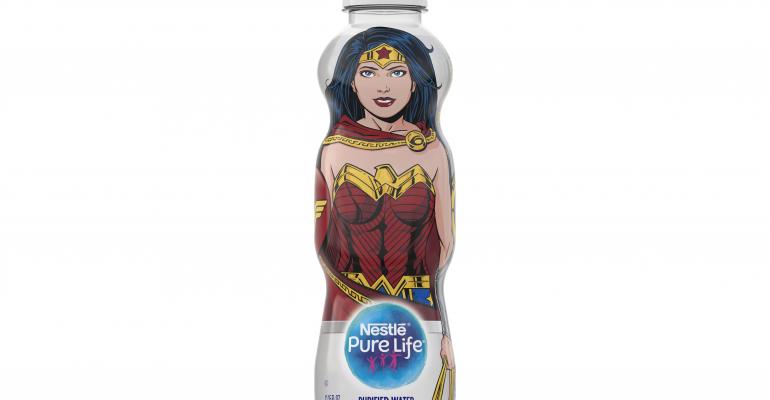 The packaging for the new "DC Collection", which is available in stores now, is also super from a sustainability standpoint—it’s 100% recyclable including bottles made of 100% recycled PET (rPET) along with the special recyclable shrink sleeve labels and caps.

"We’re excited to team up with Warner Bros. and DC to make drinking water more fun for families with kids," says Yumi Clevenger-Lee, Chief Marketing Officer at Nestlé Waters North America. "By featuring characters kids look up to, along with a 100% recyclable bottle made with 100% recycled plastic, we're doing our part to help keep both families and the planet healthy."

"DC Super Heroes are among the most popular in the world and this new line of bottles is a great way to appeal to families with kids while reinforcing healthy choices," adds Maryellen Zarakas, senior vice president, franchise management and marketing, Warner Bros. Consumer Products. "We are also teaching kids that every positive action towards creating change is what being a super hero is all about."

Wonder Woman, our first featured superhero bottle, is a founding member of the Justice League, according to Wikipedia. The character first appeared in All Star Comics #8 in October 1941. The Wonder Woman title has been published by DC Comics almost continuously except for a brief hiatus in 1986.

You’ll find an individual superhero with additional information featured on the following three pages, including the next iconic figure who sports a packaging-enabling “superpower” found on all of bottles in the series that kids will enjoy—and that works at the speed of light.

Next: A truly super hero 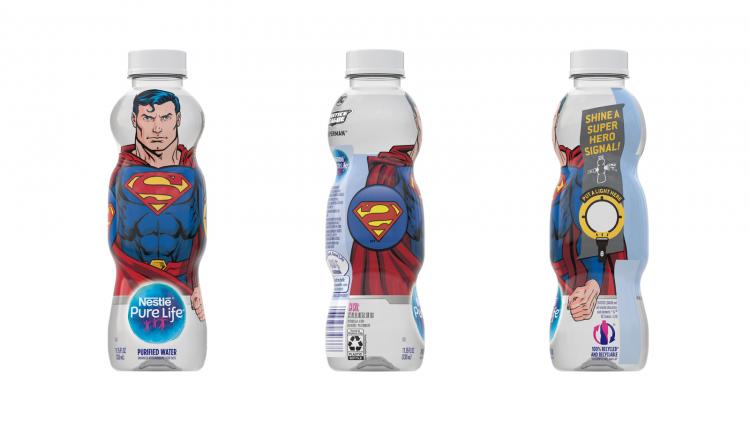 Arguably the most iconic of all superheroes is Superman, who fights for “truth, justice and the American way.”  According to Wikipedia, Superman first appeared in Action Comics #1, a comic book published on April 18, 1938. While he wasn’t the first superhero, Superman remains the best-selling comic book superhero of all time.

The packaging’s positive vibe includes a fun Super Hero symbol on the side of the bottle that encourages kids to finish drinking their water and displays a unique capability: Once finished, kids can shine a flashlight through the bottle from a clear circular window on the sleeve label on the opposite side, which projects the mirror-image printed symbol properly on a nearby wall.

From a marketing view, the superhero series is intended to spark interest and generate sales. But there’s also a health benefit when that happens: Research shows that more than 50% of U.S. children between the ages of 6 and 19 are inadequately hydrated, which highlights the need to increase water consumption.

An NWNA spokesperson shared this with Packaging Digest: “The Nestlé Pure Life DC Collection is a fun choice for every on-the-go occasion, from school lunches to summer road trips. It's also a healthy alternative to sugary drinks with no calories and no sweeteners.

"DC Super Heroes are among the most popular in the world, and we hope these four characters, along with the Super Hero symbol on the side of the bottle, will help make drinking water more fun for families with kids.”

It’s not the first time the brand has enlisted familiar characters, in the past it has featured Emojis on 330mL/11.15oz bottles and SpongeBob SquarePants on 8oz bottles.

Next: The bottles’ special recycling abilities 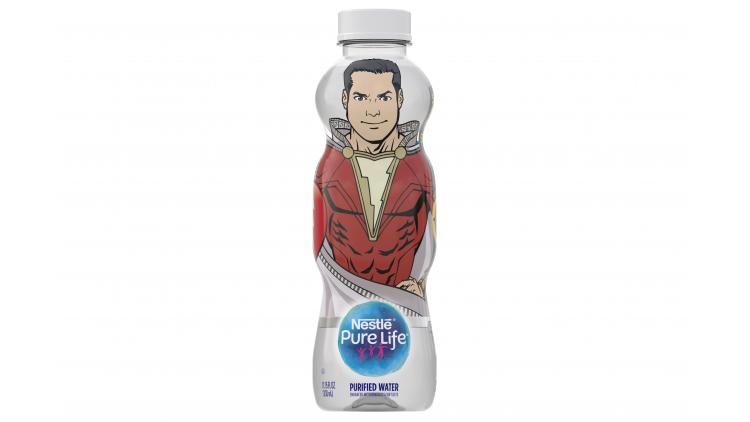 Shazam—an acronym of six “immortal elders” Solomon, Hercules, Atlas, Zeus, Achilles and Mercury—is a superhero with roots stretching back to 1939. Wikipedia states that he is the alter ego of Billy Batson, a boy who, by speaking the magic word "SHAZAM!", can transform himself into a costumed adult with the powers of superhuman strength, speed, flight and other abilities.

The packaging has a very special ability, too: Not only is it 100% recyclable, it’s the first time the brand owner is using this sleeve label technology.

An NWNA spokesperson discloses these additional details: “The shrink label is does not use an adhesive, instead uses various compatible polymers that work well in the recycling process. We invested in new equipment that applies these specific labels, further demonstrating the pride taken in carefully designing our bottles—down to the label—to be 100% recyclable so they can retain their quality and be turned back into new bottles. We are working with a number of strategic suppliers as we continue to explore alternative packaging options to virgin PET plastic.”

Notably and unlike some other sleeve-wrapped products, this new sleeve label technology does not require consumers to remove the label before recycling; consumers can simply place the cap back on the bottle when finished and discard in the recycling bin.

Packaging Digest speculates that the recyclable sleeve may be based on Eastman’s Embrace Encore copolyester due to the resin’s similar properties, but that could not be confirmed.

Next: The World’s Greatest Detective and final details 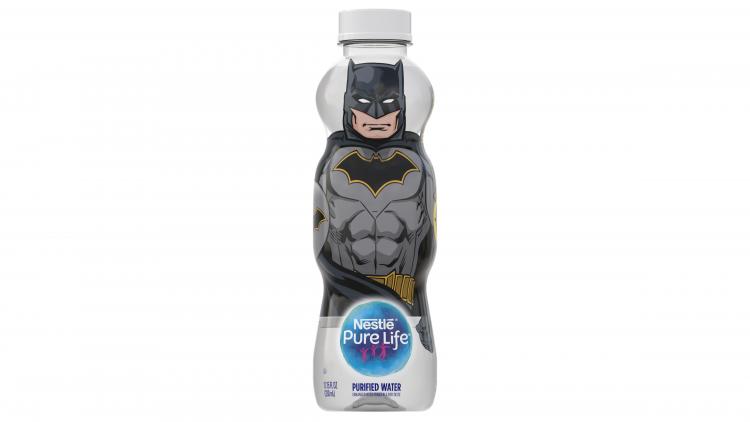 The fourth superhero for the launch is Batman, who debuted in 1939. Originally named the Bat-Man, the character is also referred to by such epithets as the Caped Crusader, the Dark Knight and the World's Greatest Detective, according to Wikipedia.

That last moniker is quite a boast, though I suppose with Sherlock Holmes likely dead by now...

NWNA makes quite a claim of its own: That the launch of the DC Collection, along with the introduction of 900mL bottles of Poland Spring Origin in April and Nestlé Pure Life 700mL bottles, means the company has the only three major nationally distributed bottled water offerings on the market made using 100% recycled plastic. It was last year that it promised to achieve 25% recycled plastic across its U.S. domestic portfolio by 2021. The company plans to continue expanding its use of recycled materials in the coming years, further setting an ambition to reach 50% recycled plastic by 2025.