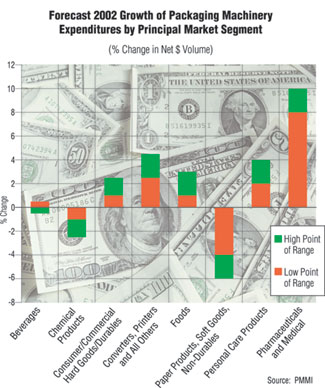 The U.S. capital investment in packaging machinery is predicted to rise to an estimated $4.992 billion by the end of this year, an increase of 1.5 to 2.5 percent over 2001. This increase is expected to occur slowly as customers evaluate the validity of the economic recovery and determine how this might affect their companies' prospects.

These forecasts are found in an annual study from the Packaging Machinery Manufacturers Institute that is based upon in-depth interviews with 409 purchasing decision makers representing 1,753 plants in various sectors of the domestic packaging market. Although a significant number of survey respondents at first indicated they would either further reduce capital expenditures or at least hold spending to the same levels as '01, most also indicated that they would revise their budgets upward if the economy shows visible improvement.

The study points out that, since the interviews were conducted during January and February of this year–when pessimism and uncertainty clearly ruled the market's thinking–it is possible that many of the cautious respondents might offer a more optimistic outlook if they were interviewed at this time. Most of the predicted 1.5- to 2.5-percent increase is based on an improvement in the U.S. economy and a reactive increase in capital spending by the packaging market. 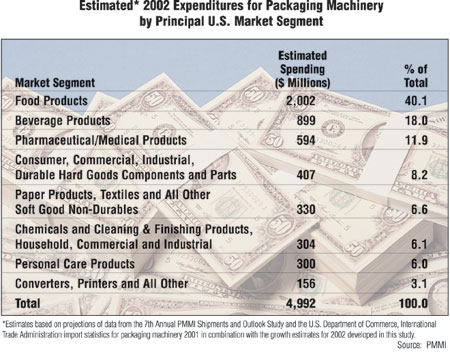 Initially, a larger-than-normal share of the capital spending–more than 42 percent–will be devoted to replacement of existing machinery with new models for the purpose of improving profits through better productivity. A portion of the machinery to be ordered will be additions, installed where no equipment existed before, to reduce labor costs and expand automation.

Of the market segments, the pharmaceutical/medical industry will lead in capital spending, registering up to a 10-percent increase. Soft goods non-durables will see a decrease in expenditures, while the beverage market will be flat. In terms of dollar volumes, however, food products account for the lion's share, at 40.1 percent or about $2.002 billion. The next-largest segment is beverages, at 18 percent and $899 million, followed by pharmaceutical/medical at 11.9 percent and $594 million.

Economic reflections upon packaging
The effects of the recession and uncertainty about any impending recovery are clearly reflected in the study's findings. Less than one-third of the sample reported plans to increase spending this year, and close to another third said they would reduce the amount allotted for capital expenditures in their '02 budgets.

The assessment for the U.S. economy and capital spending are based upon several macroeconomic assumptions:

• U.S. '02 gross domestic product will show real growth of 2.5 to 3.5 percent, sustained primarily by consumer spending, improvements in productivity, and the favorable effects that depleted inventories will have on manufacturing.

• Capital spending for industrial equipment will remain flat early in the year, but then gain strength as federal tax incentives encourage business investments in capital spending. Expenditures for packaging machinery have historically tended to exceed the rate for general machinery during slow economic periods.

• Interest rates will increase gradually, tightened by the Federal Reserve as the recovery emerges.

• Corporate profits will increase over '01 levels. 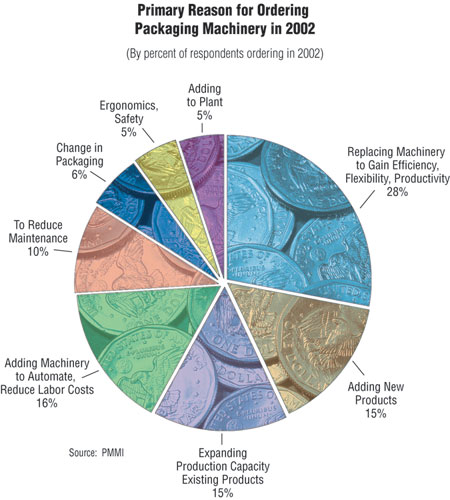 Making the case for demand
The study reports that, although spending increases will be slow to take off, the net result at year-end should be positive–barring any unforeseen or exogenous events. This prediction is also based on several assumptions:

• Economic growth will eventually instill the confidence in customers to invest in new machinery, as they are better able to justify expenditures based on ROI.

• A focus on improving productivity and enhancing efficiency will drive most of the sales increases, at least through the first half of this year. More than half of the sample indicated that machinery order decisions will be based upon efficiency enhancements, while 28 percent cited replacement of older equipment as the means to that improvement.

• Capital spending growth in the principal packaging machinery markets will exceed the spending growth rate by general industry in '02. The primary packaging markets of food, beverages, pharmaceuticals and personal care products typically remain stronger than other industries during uncertain or transitional times.

• Expansion of packaging capacity for growth in consumer products will generate about 15 percent of the capital expenditures.

• An accelerating trend toward different package designs, shapes, sizes and materials will also support the need for new machinery. Many machines are ordered to accommodate the shift from rigid materials to flexible packaging; the trend toward multiple sizes also has an impact.

• The need for improvement in ergonomics and packaging safety issues will have a stronger impact than before on buying decisions.

The report further points out that, regardless of the visible improvement in the U.S. economy, demand for packaging machinery is not expected to respond quickly to the recovery. Several negative factors will dampen growth, which is limited to no more than 2.5 percent. 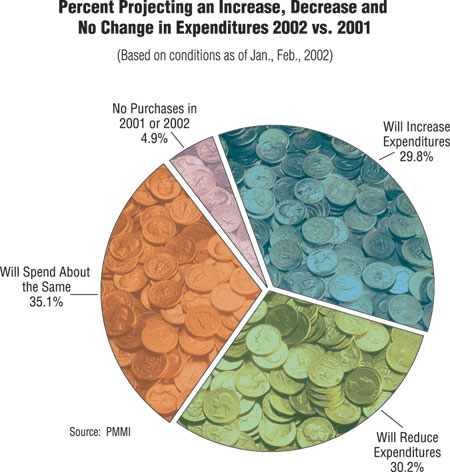 Although the study focuses primarily on the purchase of new machinery, 35.2 percent of the sample indicated they would buy some quantity of used equipment this year, up significantly from 28 percent in 2001. This is likely due to the lower cost of used machinery, allowing packagers on restricted budgets an opportunity to buy machinery they might not otherwise afford. Also, more used equipment is currently available than heretofore, and aggressive marketing of used machinery by dealers is attracting potential customers. Nearly 38 percent of the respondents also said they would order some rebuilt or refurbished machinery this year, up from 32 in 2001. Again, the cost factor comes into play because of the economic downturn. The rebuilds are offered as being a major step above "just-used" machinery, yet still representing a significant cost savings vis-a-vis new machinery.