Machinery sales to increase through 2003

shipments of packaging machinery are forecast to grow at a cumulative annual rate of 3.0 percent during the next three years. Based upon an aggregate forecast for 17 machinery categories (see table), sales should grow from an estimated $4.962 billion in 2000 to $5.426 billion by 2003. 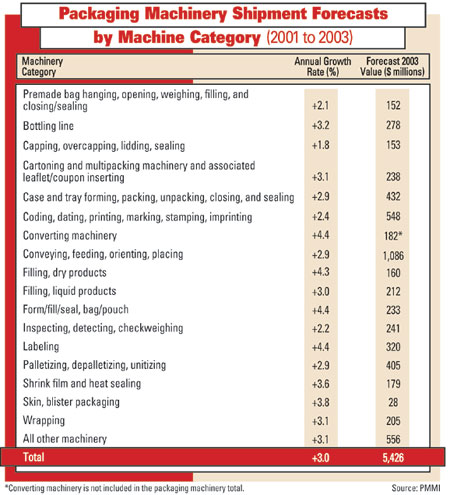 & The U.S. economy will recover. Gross domestic product growth in the third and fourth quarters of 2001 will prove to be negative, each in the range of -1 to -2.5 percent, leaving the annualized GDP growth for 2001 at +1 to +1.5 percent. However, the economy will progressively gain strength through the second half of 2002, with the momentum carrying over into 2003. The report states that recovery from the 2001 downturn will be initially aided and maintained by government deficit spending, further tax relief and incentives, and the Fed's continued policy of low interest rates. Assuming no further disruptions to growth, the U.S. economy should grow at 2.5 to 3.0 percent in 2002 and 3.5 to 4.5 percent in 2003.

& Capacity utilization will increase gradually. As a key indicator of the manufacturing sector's willingness to invest in new equipment, capacity utilization should remain in the low- to mid-70-percent range through the first half of 2002, but increase gradually to at least 79 percent by the end of this year and to 81 to 83 percent by the end of 2003.

& Capital spending for machinery will lag early in the economic recovery. The immediate demand for new equipment will be weak and selective at the start of this year, since many companies splurged on capital equipment in the years prior to the slowdown. Most forecasts are predicting net declines in fixed equipment investment for both 2001 and 2002, followed by a sharp upturn in 2003. The PMMI report notes, however, that spending for packaging machinery has consistently exceeded investment in industrial equipment in general. The forecast, therefore, is more optimistic than are predictions for industrial capital equipment as a whole. Nearly two-thirds of packaging machinery sales are generated by the food, beverage and pharmaceutical/ medical products segments, which are essential to the consumer, regardless of economic downturns.

& U.S. exports will begin to improve late in 2002. The potential for immediate growth of exports is low because of the protracted weakness of key foreign economies, notably Asia, Europe and Latin America. However, the global economy will recover, in lag-step to the U.S. recovery, and exports should increase accordingly. 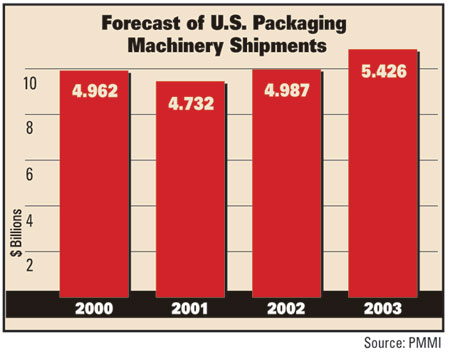 Fast movers
As seen from the accompanying table, the fastest growth will be logged by form/fill/seal machinery, and labeling and converting machinery. Most of the other categories will see moderate growth only slightly behind those categories. The largest category, conveying and feeding equipment, will record about 2.9 percent growth. None of the equipment categories is expected to see a decline [for a look at how U.S. machinery categories fared in 2000, see PD, Dec. '01, p. 44, or view the article online at www.packagingdigest.com].

Canadian packaging machinery shipments are forecast to grow at an average 3.6 percent per year through 2003, from an estimated C$353 million to C$393 million. On the assumption that Canadian machinery manufacturers will maintain their current emphasis on further expanding sales and market coverage, both domestically and globally, their potential for growth will exceed that of U.S. companies. However, over time, those differentials in growth rates will diminish. For a copy of the complete study, which is available for $2,500, call PMMI at 1-888-ASK-PMMI. Circle No. 213.