U.S. shipments of packaging machinery increased by 2.2 percent in 2000 to a value of $4.952 billion, according to the seventh annual Shipments & Outlook Study from the Packaging Machinery Manufacturers Institute. Almost all of the growth was generated by domestic market shipments, which rose 3.1 percent to $4.113 billion. Over the past five years, most growth has derived from the domestic market, reflecting the benefits of a sustained strength in the U.S. economy and a high rate of capital investment by U.S. industry. The decrease in packaging machinery exports has been linked to weakening overseas markets and the competitive disadvantage exerted by the strong dollar. Exports have been steadily declining, accounting for 17.1 percent of machinery shipments in 2000, or $849 million, down from 22.4 percent in '96.

Looking at machinery shipments over the past six years, an interesting short-cycle pattern becomes apparent (see bar chart). The odd-numbered years have witnessed much higher growth, but the differences between the highest and lowest are evening out to some extent. 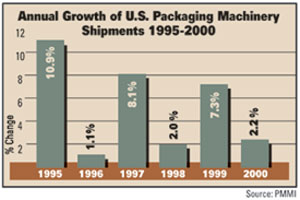 The range of growth by 17 individual machinery categories is shown in the accompanying table. The largest single category–conveying/feeding/orienting equipment–logged $998 million in shipments but registered only 1.8 percent growth over 1999. Showing the greatest growth are bottling line machinery at 27.1 percent, palletizing/depalletizing at 17.6 percent and converting machinery (primarily bagmaking and thermoforming) at 10.8 percent. The smallest category–skin and blister packaging machinery at $25 million in shipments–accounted for the most significant decrease, at -20.6 percent.

The pie chart shows the distribution of packaging machinery shipments by market segment. Food, beverage and pharmaceutical markets account for about two-thirds of machinery investment (based on dollar amounts). The remaining one-third is comprised of six market segments, none of which is larger than 7 percent.

Seven growth factors
The report notes that several overriding factors and developments, both positive and negative, impacted shipment results in 2000.

?The mixed performance of the U.S. economy. The strength of the economy during the first half of 2000 encouraged customers to continue expanding product and packaging capacity in order to handle new product introductions and increase output. However, the weakening fundamentals in the second half of last year placed a damper on capital spending as customers' concerns about lower profits, excess capacity and market uncertainty caused an abrupt tightening of budgets. ?The soft export market. As mentioned earlier, the weakness of foreign economies, coupled with the strength of the U.S. dollar, caused machinery exports to decrease yet again. 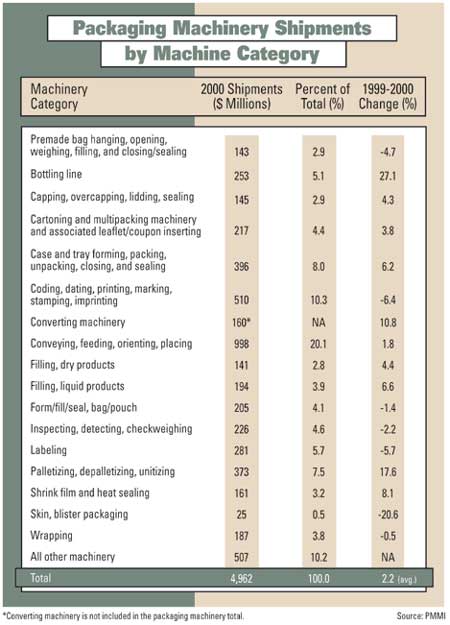 ?The continued emergence and adoption of new and alternative packaging materials, sizes, configurations and concepts. Prominent examples include the shift toward plastic bottles, standup pouches and sleeve labels, among many other packaging changes.

The Shipments & Outlook Study also includes a forecast for 2002. Packaging Digest will report on that part of the study next month.