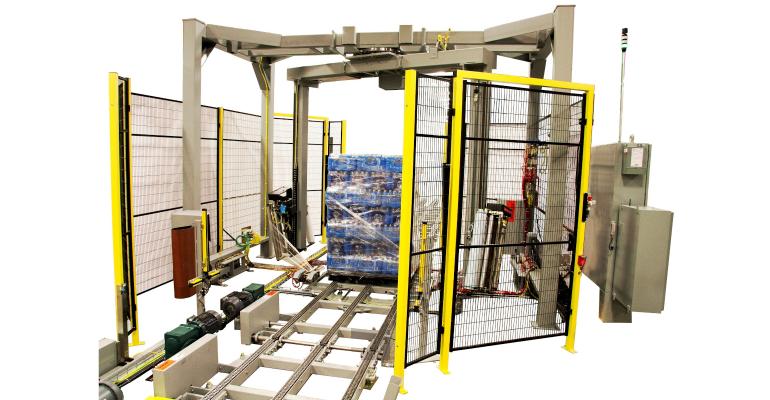 Companies seeking greater throughput, savings, and safety in the warehouse and loading dock have found all of these benefits with automated pallet stretch-wrapping systems. Now, a new system from Orion Packaging Systems, a division of ProMach, is the MA-DX 2 Rotary Tower stretch wrapping system that pushes load throughput to 100 pallets per hour.

The MA-DX2 shares features with its previously announced sibling, the MA-DX. These include a stable 4-leg design and the manufacturer’s Insta-Thread film carriage for fast, easy, and safe film loading — among other features for safety and reliable performance.

The new system adds a second rotary arm and film carriage. To maintain high-speed stability, the dual 30-inch Insta-Thread film carriages and 28-revolutions per minute (rpm) counterbalanced rotary arms oppose one another to apply film in a crisscross pattern.

Automation features include a menu-driven operator interface communicating with an Allen-Bradley PLC; AC motors with variable frequency drives (VFDs); and photoelectric sensors that will pause the machine if the film breaks or runs out.

Some users will opt to add a smart companion: the MA-DX LoPro Drag Chain Conveyor System. It’s said to virtually eliminates pallet loads tipping over and damaging cases, and can accept three pallets at one time. It’s also a labor-saver because it can be operated by just one person. One beverage distribution center, the company reports, realized a complete return on investment in only 18 months.

The MA-DX2 will be featured at the 2020 Pack Expo Connects virtual show (November 9-13), with three separate topics discussed in live product demos hosted on the Orion Packaging Systems exhibitor page.

Why Product Samples Are Key for Contract Packaging Success
Dec 23, 2021