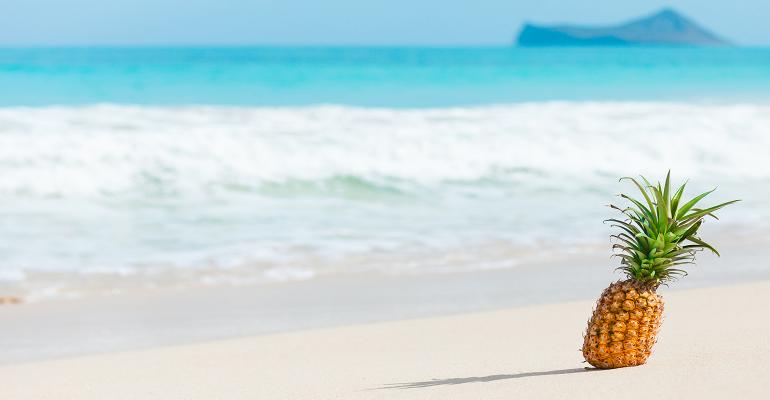 This 1985 food plant visit to the island of Oahu involved pineapple of course, but a dwarf, machete, and marijuana all played unexpected roles.

A fortuitous assignment sent me to an island paradise a few months into my journalistic career; here’s how that came about…

I was introduced to Jack virtually about two years earlier while working in R&D at the R.T. French potato processing operations in Shelley, ID. I read industry publications on breaks at the plant including Prepared Foods and was fascinated by Jack’s descriptive step-by-step, plant-walkthrough features. Because I’ve always enjoyed writing, I thought that visiting processing and packaging operations as part of an editor's job would be, as a former colleague would say, the bee’s knees.

While married and still living in Idaho in 1985 and reading the Chicago Tribune help wanted section as a pathway to return to the Midwest, I noticed a job listing for an associate engineering editor at the publication. I applied for and subsequently landed the job. Meeting Jack the day of my interview was like meeting an industry celebrity. Along with the chief editor, Jack interviewed me over lunch that day as he enjoyed a beer, which became a familiar sight over the years.

Settling into my new role at the magazine, I quickly learned that while he loved to travel, Jack loathed lengthy flights, for example to Europe. Or to Hawaii, as it turned out, which I discovered when Dole offered to host a visit to their pineapple operations on Oahu in late 1985. After Jack passed on the opportunity, that plum trip to paradise landed with me a couple months into the job.

And I happen to love pineapple. Sometimes it just works out.

That plant trip, which remains the only time I’ve been to Hawaii, ran as the cover feature in the March 1986 issue of PF with the headline “King of Pineapple Plants Processes Fruit of Kings.”

During my time on the island I felt as much a tourist as a trade-journal reporter. Several random remembrances…

Fresh-cut fruit is the best.

The plant tour was proceeded by a literal in-the-field visit to Dole’s Wahiawa plantation “near the lush green mountains” at the center of the island, to quote my story. My Dole guide carried a machete, the only plant tour guide of many

dozens over the decades who did so. He expertly cut and sliced a fresh-picked pineapple out in the field — it doesn’t get any more mouth-watering delicious than that.

That was followed by the plant visit to the canning operations nearer Honolulu, the highlight of which was watching the high-speed machines invented by Dole engineer Henry Ginaca in 1913 that peel, core, and cut the fruit. Naturally, they’re called Ginacas, a word that for some reason greatly amused one of my friends.

Anyway, I reviewed the canning operations to finish out the tour as I continued to take notes and photos.

After returning to normal editorial life in Illinois, I sorted through the processed pictures and found one nice photo of an employee operating one of the Ginacas. It was the only acceptable one that showed those critical machines.

However, the art director took one look, shook her head, and said, “We can’t use that one.”

“But it’s the best shot that shows that essential part of the operations,” I insisted. “Why not?”

“Look at his shirt,” she replied.

What I had mistaken for some sort of environmental logo depicted instead weed, aka, a marijuana plant, which was illegal back in the day.

It was the only sour note from the whole trip, except for the tart, yet sweet flavor of that succulent, just-picked pineapple.