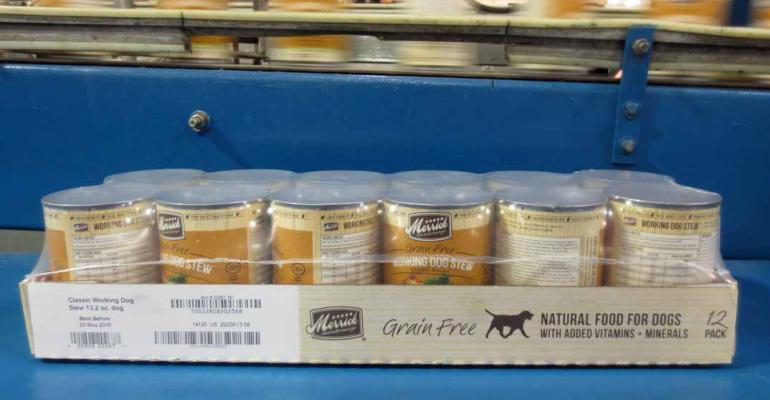 Merrick Pet Care’s innovative new multipacker with proprietary New Twist technology  wasn’t the only change on the tray-packing line (see A twist on multipacking turns up cannery’s capability). Another made four years earlier downstream also positioned it for higher throughput. Downstream of the multipacker and around the corner on a U-shape conveyor section is a shrink bundling system and integrated shrink tunnel from American Packaging Machinery that was installed in spring 1998 and refurbished in the fall of 2010.

“It constantly needed a mechanic’s attention and it almost seemed we had to replace parts daily on it,” plant manager Michael Myers recalls. “It had become the bottleneck on the line.”

To bring it back up to speed and with higher throughput (31 trays per minute at the time), the shrink-wrap system was transported from Texas to APM in the northwest suburbs of Chicago to refurbish it over a week-long holiday shutdown.

One of the key upgrades was the replacement of the mechanically driven seal-frame carriage with a servo-driven carriage that uses Emerson components.

The software on the Rockwell Automation Allen-Bradley Human-Machine Interface (HMI) was reprogrammed so that the servo operation mimicked that used for the mechanical operation. With the upgrade, the carriage operated in continuous motion to match the conveyor speed and was programmed for a return stroke at twice that speed to be positioned for the next tray pack. The changes greatly reduced the amount of chains, gearboxes and sprockets versus the all-mechanical system, Myers notes. The improvement also required a beefier support frame for the carriage.

“This was done at half the cost of a new machine,” says Myers. “The machine was returned as close to ‘plug-and-play’ ready as I have ever seen in a rebuild project. APM was great to work with and provided awesome customer service and technical support.”