Image of pallet conveyor accumulation around a corner courtesy of Dorner 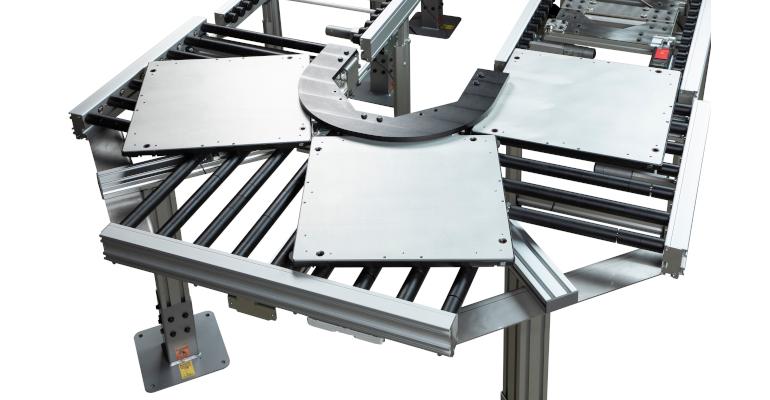 A conveyor system used within a medical device and assembly operation needs precise movement and must complement the overall sterility of the environment, but some unintentionally do just the opposite. Certain styles of conveyors tend to produce debris during operation, and that can negatively affect a company’s cleanroom goals.

To alleviate debris and other conveyance concerns in medical device manufacturing, pallet conveyors are becoming a platform of choice for the industry, thanks to the flexibility, precision, and other advantages they offer.

For some medical devices, final assembly can be a time-consuming process, and it’s easy to see why. Products tend to be very small, requiring a steady hand (if assembled manually) for each component going into the device. Additionally, many medical device manufacturers follow a system that’s mirrored by most assembly automation applications. The parts that they’re producing go through a progressive stage of assembly. Finished parts could either go in front of an operator for handling or be positioned in front of a robot for assembly—or a combination of both. These steps normally include combining parts by gluing, bolting, or snapping together or further assembly such as inserting circuit boards.

In these environments, manufacturers typically use a type of assembly cell. For example, on one end of the cell a product is introduced in its basic form. As it progresses through the cell, employees add components until it reaches the end of the line, where it’s fully assembled and ready to be packaged.

Pallet conveyors are typically used to move products from one end of the cell to the other. As implied by its name, pallet conveyors have individual pallets, or trays, attached to them that keep the product and related components together as they move through the cell. (See below.) When products are assembled, they’re taken off the conveyor and the empty pallet loops back around. It is the precise movements of the pallet as well as the interfacing with operators and robots that make pallet handling conveyors effective in medical device manufacturing. 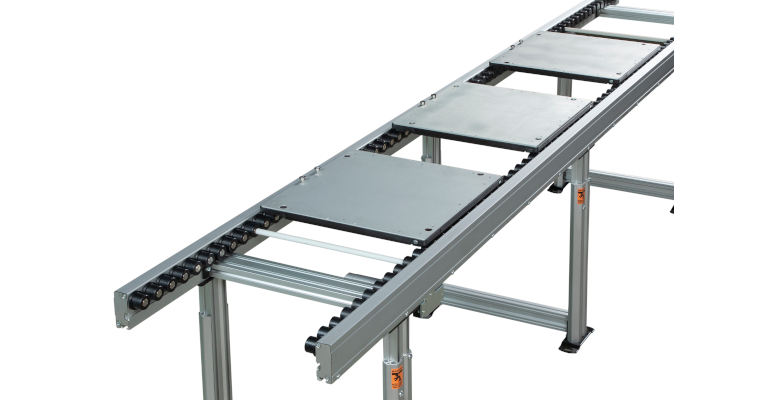 In a synchronous system, everything moves together; the pallets are connected to a drive system, and they move in unison like a train. The downside to this type of pallet conveyor is that the timing of each individual station has to be in sync to get production right. Action at each cell needs to be completed before the conveyor moves. A delay in just one cell can slow production. 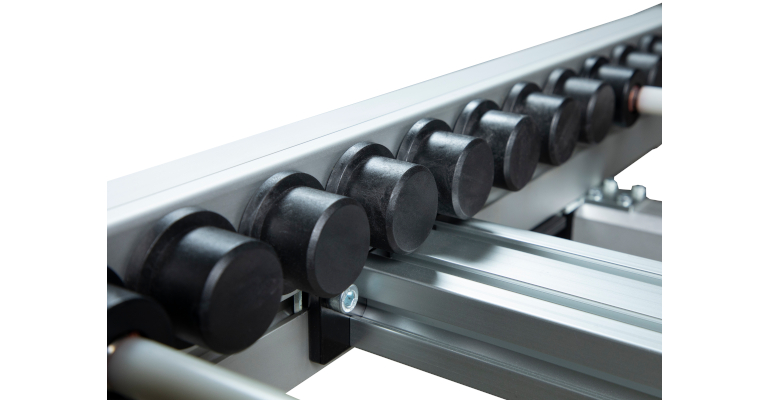 Drive rollers for a pallet conveyor.

In an asynchronous system, the conveyance system operates independently of the pallets as they’re not permanently attached to the conveyor. The advantage this gives manufacturers is flexibility. For example, one pallet conveyor can service several different stations with different assembly times for each. A pallet conveyor uses sensors and logic to recognize whether a pallet needs to stop at a particular station for interaction, or it can bypass certain stations to move components elsewhere along the line. Types of asynchronous conveyors include dual-strand belted, roller-top chain, and edge roller, which has the added benefit of zoning capability.

The flexibility of independent pallet movements is made possible through zoning. Creating zones along a conveyor is an important feature for medical device applications where product accumulates before moving on to a downstream action, bypassing a station, or where product moves from one station to the next. Primarily, zones are important as they prevent pallets from bumping into each other during movement (known as back pressure), which can disturb product orientation or even damage more delicate medical products. 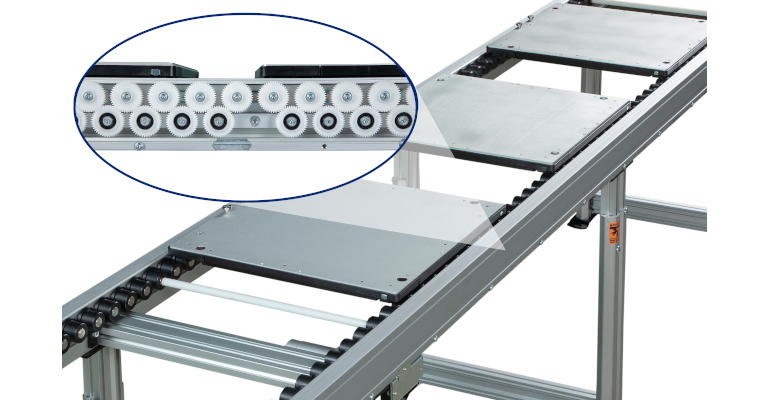 Creating a zone is done simply by removing a gear. So, instead of having one 20-foot-long conveyor with a motor on the end, you can effectively divide the conveyor up into several miniature sections with small, individual motors, which only operate when pallets advance forward or reverse. The advantage smaller motors bring is energy efficiency through low-volt technology.

Another perk of being able to control sections of the conveyor with motors is the elimination of pneumatic stops. Air is dirty, and anytime pneumatics is used in a cleanroom, it is expelling dirty air into that environment. Using electronics is ultimately a more efficient alternative for use in cleanrooms. 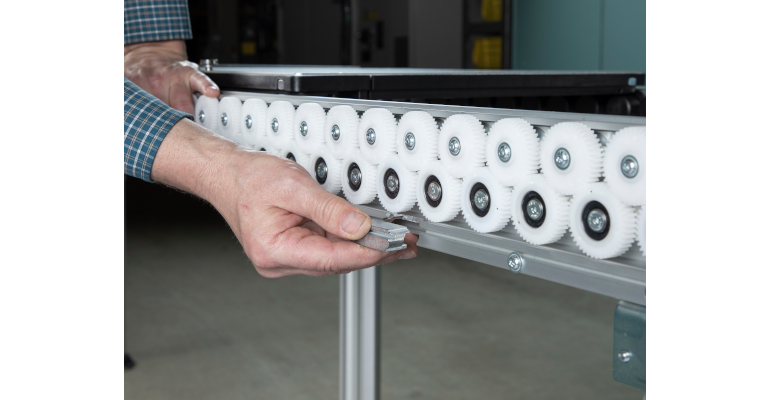 Unlike other conveyance systems that use traditional belts, some pallet conveyors employ rollers along the frame and interlocking gears to move pallets. The main benefit of using rollers is that it’s cleaner to use. That’s because with most conveyors that are designed with a belt or chain as the drive mechanism produce friction … and friction equals debris. For example, moving a conveyor belt across a bedplate or even moving a chain against a wear strip produces debris, which in a medical assembly cleanroom is a bad thing. To determine the right pallet conveyor system for your application, you should evaluate production goals along with weighing the cleanroom rating against the likelihood of your operation producing debris.

Pallet conveyor systems have evolved through the years to a point where they provide added flexibility to medical device manufacturing. The ability to have one conveyance system where pallets can move independently enhances the overall efficiency of an assembly line. These systems are also cleaner to operate and more durable than earlier versions. So, the next time you’re looking to streamline your medical device manufacturing and assembly capabilities, the answer may be arriving in a pallet.