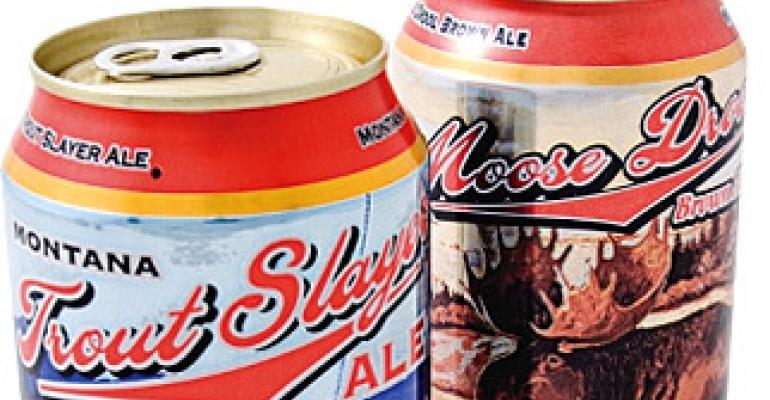 A new monobloc can filler/seamer at Big Sky Brewing Co., Missoula, MT, is achieving impressive residual oxygen levels in cans of its craft beers. In March 2009, Big Sky Brewing joined the growing number of craft breweries offering beer in cans when it introduced Trout Slayer Ale, a filtered wheat beer, and Moose Drool Brown Ale. “In Montana, we're unable to recycle glass, so that was one of the main reasons for using a can,” explains Trinda Rieck, sales and events coordinator.

In addition to can recyclability, Big Sky also wanted to be able to offer a high quality beer to folks who would like to bring beer camping, fishing, hiking, skiing and to other places where glass bottles are either not ideal or not allowed. “We had not made the plunge to produce in cans as we were never able to attain the low oxygen levels that we require in the quality of our beers,” says Rieck.

Low residual oxygen a must

That all changed when Big Sky learned about a filler/seamer installed at another brewery. “We had been looking for a machine that could meet our residual oxygen requirements for years, but nothing was available in a size that met our production rates,” says Kris Nabozney, Big Sky's vp of operations. “There are high-volume machines available, but we are only running about 60 cans/min, so we don't need that level of capacity. Then we heard about a machine at another brewery that was achieving great oxygen levels in the beer, so we looked into it.” The machine was a Mastercan monobloc filler/seamer from SBC Bottling & Canning, Inc. “SBC was shipping a machine to the 2008 PACK EXPO, and we bought that machine before they sent it,” says Nabozney. “They shipped it to us after PACK EXPO and we had it up and running in early 2009.”

Cans, which are supplied by Crown Holdings Inc. are received stacked about 10 layers high on pallets with a slipsheet between each layer. The pallets are delivered to a high-level bottle depalletizer that Big Sky converted to handle cans. An arm sweeps each layer of cans onto an overhead conveyor, and the cans are single-filed as they are transported to the filling area. The cans travel down a twister constructed of stainless steel rods and pass through a chamber where water is sprayed into them and then through a draining section.

The cans then enter a feedscrew that meters them into a starwheel. The starwheel places them onto individual bottle pedestals in the 10-head rotary filler section of the monobloc filler/seamer. As the machine rotates, a fill valve descends and forms a seal against the top of the can. The valve then injects carbon dioxide (CO2) into the can through a delivery port, and this flushes the oxygen from the can through another port. “We've been amazed at how effective this system is at removing oxygen,” says Nabozney. “We are consistently getting only 30 parts/billion of residual oxygen in our beer.”

The injection and removal ports close after the purge cycle, which leaves the can filled with CO2 at the same pressure as the filler bowl containing the beer. As the filler continues to rotate, the beer inlet port opens and the incoming beer flushes the CO2 out of the can through a discharge port called a snift valve, which maintains the pressure in the can as the beer enters. The timing of the fill cycle is set so that the filling finishes as the bottle reaches the filler exit. At this point, the cans exit the filler and enter an indexing chain running at a right angle to the can flow from the filler.

“This is a fully electronic can filler,” says Nabozney. The Mastercan unit is equipped with an Allen-Bradley PLC and HMI from Rockwell Automation. The proximity switches on the machine have been designed specifically for this filler and are integrated with the latest Allen Bradley control platform.

The highly sensitive sensitive proximity switches provide information back to the PLC. Each valve functions independently to have full autonomy for precision fills, while evading the filling of damaged or misaligned cans.

Thus, the valves are controlled based on meeting all preset requirements, rather than having an outside mechanism, such as a cam, to start and stop the various processes of CO2 purge, leak detection, counter pressure and fill. Another advantage of this is having the ability to diagnose problems via the touchscreen on the HMI.

The chain from the filler carries the filled cans into the in-line can seamer, while can ends are delivered down a chute to a rotary feeder that transfers them into the seamer. Individual cans are lifted up into the seamer chuck, which holds them during the double-seaming operation. After completion, the lifter plate with the seamed can automatically descends to the conveyor and the can discharges from the machine.

Cans travel through a water-rinsing section followed by an air-drying section, and then enter a Gamma 101 fill-level monitor from Peco Controls Corp. that uses gamma rays to check the level in the can. Next, the cans travel to a machine from ITW Hi-Cone that applies a plastic-ring carrier with a top-lift handle to a six-pack of cans.

“The Mastercan filler/seamer has worked out great for us, and SBC has done a terrific job,” says Nabozney. “We had some issues that were more our fault than theirs, when the machine was delivered, and SBC sent two technicians who stayed with us for three weeks. The machine is really very simple to operate, and we've had no problems since they left. We definitely would deal with SBC again if the opportunity arises.”