How to scale packaging line automation around the world 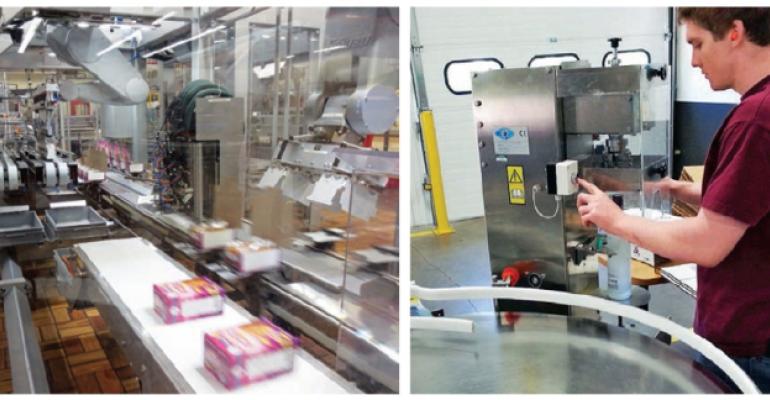 Multi-national manufacturers use a number of factors to determine whether to invest in highly automated lines (left) or start with semi-automatic operations and then scale up.

When it comes to selecting packaging machinery to scale up around the world, global companies are faced with a decision: when—and where—to invest in automated machinery vs semi-automated systems?

Interest for American products in emerging countries is on the rise partly because of the growing middle class in some of those areas. From a capital equipment need, semi-automatic machines often fit the packaging operation needs in those countries. Yet, to be competitive in the United States, companies often focus on highly automated packaging systems.

Members of Packaging Digest’s Editorial Advisory Board give us their take on how they look at—and handle—the dichotomy.

Peter Macauley, director, global packaging & sustainability, Abbott Laboratories: As we invest in new manufacturing capabilities in some of those emerging countries, we do have to match what the line capabilities are to the skill sets that are there. Also, you have to match it to what the labor rates are, as well. We don’t always put in the same equipment that we may do, say, in an established country like the U.S. and Europe, as we would in other areas of the globe.

Joe Keller, section head, hair care R&D packaging development, The Procter & Gamble Co.: I would agree. We try to take a long-term view to it, as well. We standardize it globally because that has other benefits—being able to transfer to the highest one, one region to the next, and being able to troubleshoot things more easily if your lines are standard. We might look ahead and say, okay, labor rates are eventually going to level out between the regions, do these other benefits make it sensible to go ahead and install a more highly automated piece of equipment in a region where labor rates today are still low knowing that they’re going to come up as we’ve seen in China recently? You do need to look at what the local situation is, but you also need to take a long-term view and ask “Does it make sense going forward with it?”

Michael Okoroafor, vp-packaging R&D/innovation, H.J. Heinz: You described the dichotomy well. However, they converge at some point. Let me explain.

As a new entrant in an emerging market, you don’t want to go with the most sophisticated equipment because maybe the skill level is not there. There’s also a need to keep the people there employed. So at the entry point, you go with basic equipment that requires people watching it.

But you’re going to face competition. If you don’t do a lot of things with robots and automation, pretty soon, you find yourself not being competitive. At some point, it will converge to purely automated devices using less people so you can do it more consistently and, more importantly, more cost effectively. Because affordability is even more critical when you go in the emerging markets because the buying power is not as high as in the U.S. or Europe.

Automation is occurring here as well through a larger role in the definition phase of a project. Predominantly, it’s how boxes get erected. Or, can we deliver a more consolidated packaging assembly to the factory? These are but two examples of how automation is influencing our packaging design.

Scott Hemink, senior R&D manager for international technical services, General Mills: Each particular business decision needs to be evaluated on its own. There are cases in both emerging and developed markets where automation makes a good deal of sense, as well as service situations where it doesn’t.

For instance, there are lots of emerging markets that use heavy levels of automation because they are very much needed, whether that’s Brazil or India or other places. You’re producing millions of units of basic foods. There’s a value to automation there and automation at the right level. You don’t need an extremely customized system from the top manufacturer—but you might, depending on what the local business needs are.

Even in the U.S. as a developed market, there are examples of niche products, test markets or regional markets where you want a lower level of automation because the risk can be high. You want to minimize the capital you put at risk.

Your choice to automate or not automate should be based on the specific risks, challenges, market factors and the products you’re launching—all of those things need to be taken into account on each individual business decision.

Denise Lefebvre, vp, global beverage packaging, PepsiCo: We’re in a very highly automated industry, all over the world. We use what’s right for each market and then, dependent upon the scale of that market, we just vary the output speed. So if I have a can line here that does 2,200 cans a minute, in Thailand if it does 500 a minute, I’m not sure the automation is any different.

How do you introduce that highly automated system in an area where maybe the skill level of the operators isn’t so high?

Lefebvre: There are extensive training programs when we buy a production line. That’s the cost of putting in the production line for us. It’s baked into the CapEx. We’ve been specific about the training and made sure our suppliers have had resources in those markets on the ground.

Our procurement group has driven that strategy. They’ve done an outstanding job at that, as well as at developing local suppliers. I can’t say it hasn’t been a challenge, but our engineering, supply chain and procurement teams have done a nice job, so we can get automation in the market with the right support to the plants.