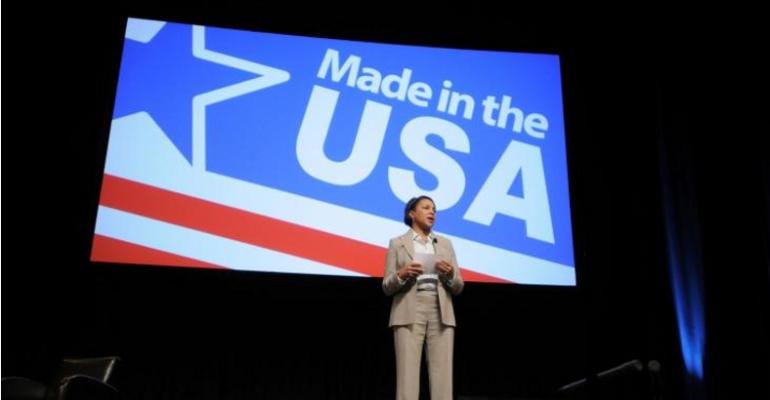 Anything Wal-Mart can do to bring jobs home to American workers is included in the company’s U.S. sourcing initiative; and this includes retail packaging, according to Cindi Marsiglio, vp of U.S. manufacturing at Wal-Mart.

I was 13 when my dad lost his first customer to China. I had just written a research report on China for school and he asked for a copy. I couldn’t believe he wanted my report. For business?! How cool. Little did I know, however, that the writing was on the wall. U.S. manufacturing continued its downward trajectory as I moved through high school and graduated from college, losing many clients to the riptide of cheap labor pools of international operations.

The void left from the offshoring of American manufacturing was never filled, not in our social imaginations nor in our workforce. And nowhere was this more apparent then in small-town America following the economic crash of 2008. While being a service-centric economy was fine during the economic growth of the 1990s and early 2000s, this wasn't the case following the mortgage crisis that handicapped the excessive consumer spending that formed the foundation of our service economy.

But it was too late. We had already offshored our infrastructure of production. It would take a Titan of the industry to reverse engineer the supply chain of “Made in USA”: A Titan that had its pulse on the American consumer and a vein in every American community; a Titan that employed 1.4 million Americans; a Titan responsible for sourcing billions of dollars of product from manufacturers around the world every year.

In January of 2013, Walmart committed to buying an additional $250 billion in U.S. products by 2023. Since beginning this journey just two years ago, the company says it’s seeing suppliers make enormous strides in finding ways to assemble or produce products in the U.S., which is helping boost job creation.

But what this commitment means to American manufacturers, American workers and the American economy has yet to be written on the wall.

I interviewed Cindi Marsiglio, vp of U.S. manufacturing at Wal-Mart, to learn how this initiative may impact Dordan’s customers; that is, those responsible for any dimension of product packaging; be it packaging designers, brand managers, purchasing agents, supply chain managers and all those in between.

Marsiglio has worked at Wal-Mart for more than eight years, serving in a variety of capacities within the government relations arm of the corporation. She has been spearheading the U.S. sourcing initiative for about a year in Bentonville, AR, Wal-Mart’s headquarters.

According to Wal-Mart’s suppliers, about two-thirds of the products sold at Wal-Mart are made, sourced, assembled or grown domestically. Since Walmart announced its commitment to domestic manufacturing, the company says it continues to see progress from supplier’s expanding manufacturing in the U.S.

With Wal-Mart’s commitment of purchasing 250 billion in product supporting American jobs over the next eight years, Marsiglio has a team that works across Wal-Mart’s merchant network to find and work with suppliers to identify domestic manufacturing opportunities. Wal-Mart does this in three ways:

• Second, to find new U.S.-made products to sell at Wal-Mart; and

• Third, to look where it makes sense to manufacture or assemble products in the U.S.

According to Wal-Mart’s customer research, after price, the biggest indicator of purchasing preference for customers is country of origin.

There is economic motivation for procuring more U.S.-made products and reshoring overseas operations. Much rhetoric exists on the American Manufacturing Renaissance; that is, how the global economies are shifting in America’s favor due to escalating labor, shipping and regulatory costs of manufacturing overseas. For Wal-Mart, these changing factors across the globe make the U.S. more attractive. The company’s interest in U.S. sourcing is three-fold:

1. It is great for business;

2. It facilitates shorter supply chains; and

3. It allows the company to procure products geographically close to where they are being sold, enhancing responsiveness and seasonal rollout campaigns.

According to Marsiglio, Wal-Mart can lower the costs of goods sold at its stores by sourcing in the U.S.

Once the proclamation of Wal-Mart’s U.S. sourcing initiative was made, the retailer spoke with its overseas suppliers, trying to understand the hurdles to reshoring. For many, it was where to locate. Everything from where to find the raw materials to creating the required supply chain married with the complexities of workforce development and tax incentives added to the complexities suppliers face when reshoring products.

The company tapped into the many resources it had in governmental affairs and sponsored a variety of events targeted at bringing manufacturers and governmental officials together to discuss opportunities and solutions. By creating the platform where suppliers and state agents could cut through the complexities of reshoring, Wal-Mart provided the mechanism by which overseas suppliers could begin to look at how to bring their operations home. Some suppliers are taking a phased-in approach, focusing first on assembly. Kent Intl., an Asian bike manufacturer, is assembling bikes in South Carolina. This is the first U.S. assembled bike sold at Wal-Mart in more than a decade.

For Marsiglio, anything Wal-Mart can do to help American workers and bring jobs home is included in the company’s U.S. sourcing initiative; and this definitely includes retail packaging.

So what does the writing on the wall say? Will small-town America witness a return of commerce to their empty storefronts; will my dad’s company again provide retail packaging to clients lost years ago? Will the U.S. Manufacturing Renaissance help re-position America as a world leading economy? As someone who graduated from college in the aftermath of the 2008 recession, I speak for a generation of under-employed Millennials when I say: “Let’s hope so!”