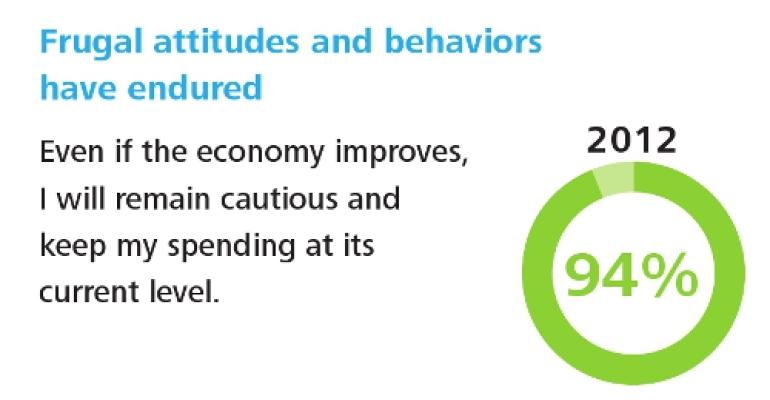 Even as the economy improves, 94 percent of Americans indicate they will remain cautious and keep their spending for food, beverage and household goods at its current level, according to Deloitte's 2013 American Pantry Study.

More than nine in 10 (92 percent) consumers surveyed indicate they have become more resourceful and 86 percent say they are getting more precise in what they buy—attitudes that have remained consistent in the three years Deloitte has conducted the study and across income levels.

Despite enduring frugal attitudes, few consumers feel they are making any compromise: More than seven in 10 (72 percent) consumers indicate that, even though they are spending less on household and grocery items, it doesn't feel like they are sacrificing much, a seven percentage point increase in two years.

Nearly nine in 10 (88 percent) survey respondents report they have found several store brands that they feel are just as good as national brands and few consumers plan to switch back to national brands: Only 27 percent plan to do so as the economy rebounds, an eight percentage point decline from the previous year.

"One of the most notable year-over-year trends in the study is how embedded frugality has become due to the recession," said Pat Conroy, vice chairman, Deloitte LLP and consumer products sector leader. "Prudent consumers and improving perceptions about store brands are squeezing national brands' position. The gap between the few ‘must have' brands on shoppers' lists and others on the shelf may be widening, making it more important for brands to differentiate through innovation, quality and performance. Consumer product companies may also consolidate low and mid-level performers and shift investment to the category leaders."

Brand loyalty dropped for the third consecutive year in the survey. When asked why certain brands are no longer a priority for their households, consumers cited "other brands are available on sale" as the No. 1 reason. However, brands to which consumers are most loyal significantly outpace their lower performing counterparts by 20 or more percentage points on attributes such as performance, experience and trust.

Consumers have also honed in on select brands they will consider. More than eight in 10 (84 percent) consumers say they have a specific set of brands in mind and will purchase whichever one is on sale. When using coupons, 71 percent indicate they will use them only for items they would have purchased anyway.

Shoppers are also selective about the retail channels where they are willing to purchase certain items. Consumers surveyed shop an average of 2.5 channels in each product category, compared with an average of 5.5 channels (including grocery, mass merchandise, club, drug, convenience, dollar, neighborhood market and online) for all of their food, beverage and personal goods combined.

Loyalty cards' importance in consumers' cross-channel shopping has increased, as the number of consumers with three or more grocery loyalty cards has grown from 28 percent in first American Pantry Study in 2010 to 39 percent in the most recent survey.

Additionally, 58 percent of shoppers surveyed use shopper loyalty cards in grocery stores every time they shop, up 14 percentage points in two years, and 30 percent participate in a loyalty program via their smartphone while shopping in a store. Consumers appear to feel a sense of reward from these efforts: Eight in 10 (80 percent) say that it is fun to see how much money they can save by using coupons or a shopper loyalty card.

Mobile shopping interest growing fastest among baby boomers
The 2013 American Pantry Study reveals an unmet demand for online shopping options, particularly for in-store pickup and at-home delivery. While 14 percent of shoppers surveyed currently buy consumer products online and pick them up in the store, 43 percent indicate they would like to do so, with strongest demand appearing in food and beverage categories for in-store pickup.

Approximately one in 10 (11 percent) survey respondents purchase online with home delivery and the number rises to 34 percent among those who would like to do so, primarily for household goods such as laundry soaps and tabletop disposable paper products.

"Consumers are drawn to the convenience of purchasing frequently-used food, beverage and household items online and brand preferences will likely extend into their online buying habits," adds Conroy. "Consumer product companies can use mobile and online channels to strengthen the functional and experiential brand attributes that translate into conversion and loyalty. They should consider aligning their digital efforts with consumers' location and context to reach shoppers online and on their phones, blending into their list-making, meal planning, product and price-checking, family activities and health and beauty routines. They may also market channel-specific product offerings and use these platforms to make product suggestions based on target consumers' prior shopping behaviors."

The latest American Pantry Study also indicates that interest in mobile technology is growing at a higher rate among baby boomers than younger consumers. Nearly one-quarter (23 percent) of respondents age 45 to 70 indicate they are interested in using mobile coupons they can scan at the checkout, up from 12 percent in last year's survey, compared with a six percentage point increase among respondents age 21 to 29.

Shoppers surveyed are tapping into their smartphones outside the store nearly as often as they do inside the store. Three out of 10 (30 percent) of consumers manage a shopping list or recipe while in a store, just three percentage points higher than those who do so offsite during the shopping process.

About the survey
The 2013 American Pantry Study was commissioned by Deloitte and conducted online by an independent research company in January 2013. The survey polled a sample of 4,047 consumers and has a margin of error of plus or minus two percentage points.

1. Frugal attitudes and behaviors have endured
The impact of the recession lingers and resourcefulness lives on

3. Consumers find value in store brands
Store brands are entrenched in the pantry and are expanding into more product categories

4. Cross-channel shopping
This remains the norm for food, beverage, and household goods

5. Consumers are embracing technology
Millennials lead, but interest among Baby Boomers is rising 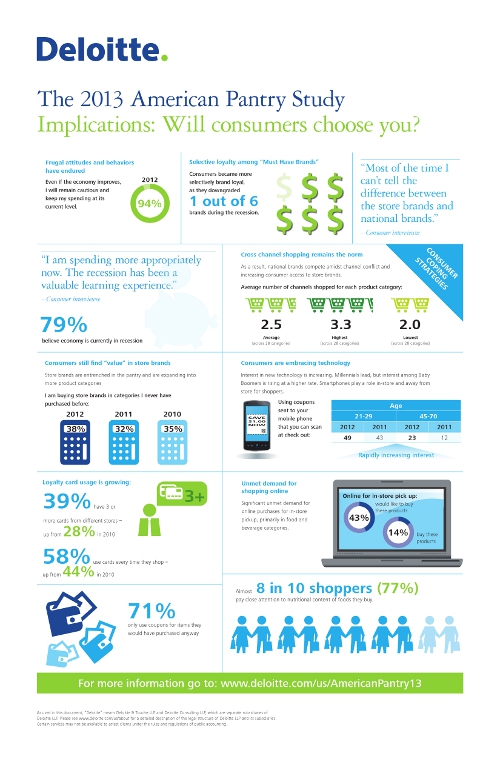