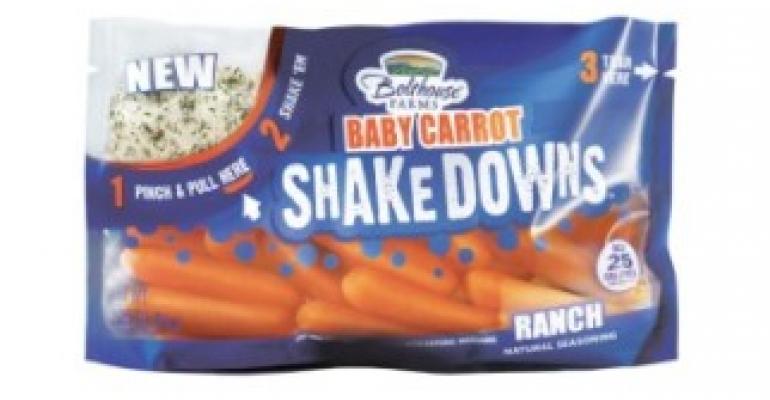 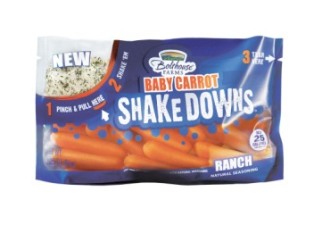 Bolthouse Farms, the country's premier producer of carrots, today celebrated a milestone moment in the 26-year life of the baby carrot: shake-on seasoning. Fresh seasoned carrots, known as "Baby Carrot ShakeDowns," are now available in San Antonio, as part of a consumer trial.

Baby Carrot ShakeDowns can be found in the produce and fresh snacking sections of San Antonio H-E-B and Wal-Mart stores.

The consumer trial is the latest stage in Bolthouse Farms' continuing campaign to make the baby carrot America's preferred snack. Baby Carrot ShakeDowns are sweet and flavorful, offering the appeal of junk food, minus junk food's calories, fat and sugar. They make the healthy choice the easy choice.

Baby Carrot ShakeDowns are an innovation in fresh produce. Small quantities of natural seasoning - Ranch, Chili Lime or Salsa - are housed in a packet inside a single-serve baby carrot snack bag. A pinch pops the packet. A pull frees the seasoning. A shake covers the carrots and the snacking can commence. At $0.99 per bag, each ShakeDowns package tops out at 25 calories.
"You can't lecture people into eating healthy," said Jeff Dunn, chief executive officer, Bolthouse Farms. "The best way to improve eating habits is to acknowledge that people tend to follow their desires when they sit down to snack. So we've started with that desire and worked backwards - we've created desirable snack food that just happens to be healthy. We're in a good spot, because carrots already have built-in snack appeal: they're orange, they're crunchy, they're delicious. And now that they come with seasoning, why bother with Doritos at all?"

The Evolution of the Baby Carrot
The baby carrot was invented in 1986, when a clever farmer named Mike Yurosek first whittled a full-sized carrot into miniature, "baby" form. The invention fueled an explosion in carrot sales that "changed American munching habits," in the words of a 2004 USA Today article. Sales of baby carrots remained steady until the mid-2000s, when consumption began to falter. In 2010, Bolthouse Farms spearheaded a campaign dubbed "Eat 'Em Like Junk Food" that set out to change American munching habits once again.

"Eat 'Em Like Junk Food" was the brainchild of Jeff Dunn, the CEO of Bolthouse Farms. Before joining Bolthouse, Dunn oversaw all of Coca Cola's businesses in North and South America. Dunn "knows every snack marketing trick in the book," according to Fast Company, and he brought that expertise to bear on behalf of the beloved baby carrot.

The 2010 campaign presented baby carrots as though they were junk food, in the form of hilarious television spots, new packaging, a "crunch-powered" video game, playfully confrontational outdoor billboards and customized baby carrot vending machines installed in high schools in Syracuse and Cincinnati. The campaign captured national attention in such venues as Saturday Night Live, on Chelsea Lately, in USA Today, the New York Times, the Associated Press and in newspapers, blogs, TV newscasts and magazines nationwide.