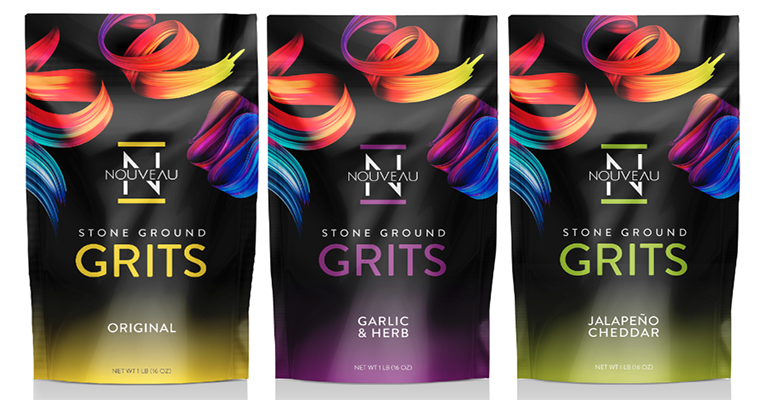 Noted for its stoneground corn grits that were years in the making, Nouveau Bar & Grill turns local fame into a vibrantly pouched food brand.

A bar and grill seems an unlikely candidate for a packaged brand launch for grits, but a stoneground version of that southern classic has been a signature item at the Nouveau Bar & Grill located — where else? — in the heart of the south in Atlanta, GA.

Owner Ebony Austin announced that her line of stoneground grits introduced last month is available nationwide via Shopify and on-site at both of Nouveau's Atlanta locations. The first product under her "Nouveau Creations" branding, the grits are available in three flavors: original, garlic & herb and jalapeno & cheddar.

While that’s all interesting if not unique, what stirred my packaging senses was the striking design on the stand-up pouches.

"Nouveau Creations' white corn stoneground grits were carefully selected from the Georgia Mountains and packaged beautifully to be placed any and everywhere," says Austin, who was raised in Chicago.

I couldn’t agree more, I was smitten by the design — the graphics are elegant, yet exciting. The vibrancy of the swashes of color against the dark gradient background and color-keyed for each flavor, are downright dramatic.

Also, the font choice, size, and placement of the front-of-pack elements are tastefully arranged.

“We wanted to something chic, yet festive — similar to our brunches in Atlanta,” Austin informs Packaging Digest. “It’s something lively and colorful that would stand out in your cabinet, countertops, and pantries.” 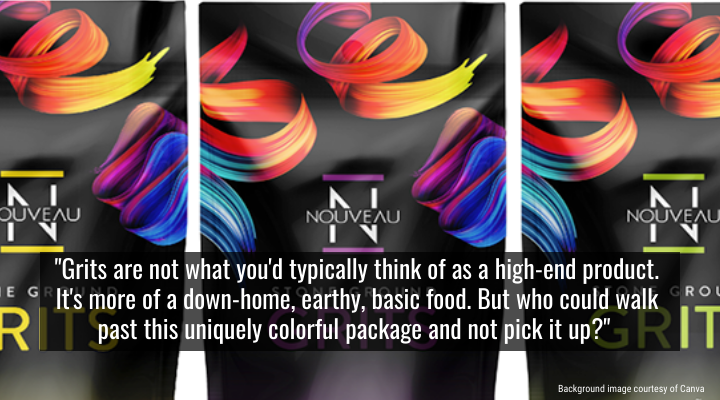 PD Executive Editor Lisa Pierce feels this launch exemplifies the power of packaging. "Any product can get an upscale facelift with beautiful packaging. Take this Stone Ground Grits standup pouch, for example. Grits are not what you'd typically think of as a high-end product. It's more of a down-home, earthy, basic food. But who could walk past this uniquely colorful package and not pick it up? Especially compared to other packages in the category? It definitely makes you reconsider grits as an option for your table."

In fact, this design is highly flexible and would have worked across a range of food product categories and beyond. It’s also a branding platform adaptable for any future products from the Nouveau Bar & Grill.

The packaging was handled through Erica Barrett of SOCU Kitchen in Tucker, GA, according to Austin.

Nouveau became one of Atlanta's hotspots largely because of the Ultimate Cajun Seafood and Grits dish. Consisting of chargrilled shrimp, salmon and crab meat served over stoneground grits and topped over Cajun cream sauce, it became an instant restaurant favorite.

The March 12 launch date holds personal meaning. “That’s a tribute to the date of my grandmother's passing, which happened when I was only nine years old," explains Austin. "She is the one who taught me how to make grits, so the launch of Nouveau Creations is a full-circle experience.”