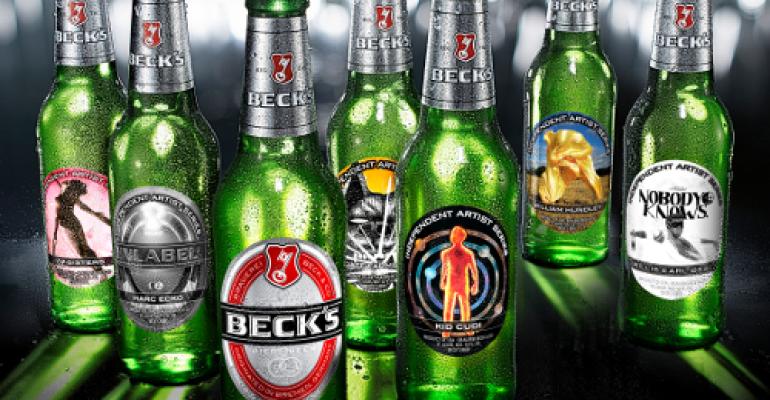 Beck's Beer, the most popular German beer brand in the world and longtime friend of the arts, has unveiled the six original pieces of artwork that will comprise the 2013 Beck's Art Labels project.

Each year, Beck's selects six artists, from different disciplines, to design original creative work to live on Beck's beer labels. Dedicated to supporting up-and-coming artistic talent, Beck's will display these designs on 13.2 million labels, amounting to 5.16 million square feet of canvas—more than eight times the square footage of the Museum of Modern Art in New York—for a summer-long art exhibit. 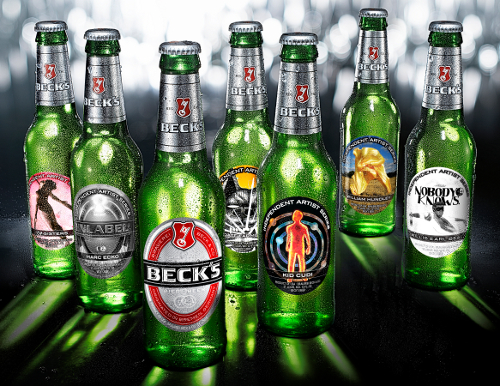 "Beck's is known for its distinctive flavor and exacting brewing standards, and we have equally high standards for the artists we work with," says Adam Oakley, vp of import, craft and specialty brands, Anheuser-Busch. "For 25 years, we've supported artists who make their own way in the world and who stand apart from the crowd. This year, we've partnered with six artists that truly ‘live beyond labels.'"

Beck's has selected the 2013 roster of artists because each reflects the independent streak that defines the brand. Despite having sold more than 4.6 million digital singles, Cudi has elected to distribute his own music through his own label. Eckō has refused to limit himself to a single creative category; he has grown a fashion company into a billion-dollar brand, launched a magazine and dedicated himself to philanthropy. Beal, Hundley, The Date Farmers and TM Sisters all followed their art to a position of prominence. Each continues to disregard boundaries and let their creative impulses lead them.

"It's especially engaging when art is unexpected—when it finds you when you're not looking for it," says Kid Cudi, Grammy-Award winning musician. "I want beer drinkers to pick up my bottle of Beck's and be surprised. I want them to think, explore and express themselves with their own art."

Over the 25 year history of the Beck's Art Labels program, more than 70 independent art labels have been created on more than 500 million bottles. Notable participants have included Andy Warhol, Jeff Koons, Damien Hirst and Yoko Ono.

"One reason so many artists are drawn to the program is its sheer scale," says Oakley. "We've opened up the largest stage for artists in the world."

In 2013, Beck's Art Labels designs are replicated on 13.2 million bottles in total. The label on a 12-oz bottle of Beck's, multiplied by 13.2 million, creates an immense artistic canvas, some 5.16 million square feet in total. It equates to nearly 95 acres of canvas, spanning more than 70 football fields.

Beck's has produced a video that captures the essence of each Art Labels artist and their creativity: YouTube.com/BecksBeer

Kid Cudi is a Grammy-Award winning, gold-selling musician and actor. Cudi is a leader of the urban alternative movement. His hit single "Day ‘n' Nite" laid the groundwork for his major album debut.

Marc Eckō is an American fashion designer, entrepreneur and artist who believes creativity is more about the journey than the destination. His art label features a photograph of an original sculpture that illustrates his process: Unlock, un-label.

Willis Earl Beal is a musician, songwriter and visual artist who has lived a colorful life, filled with outsider art and a demand to be heard. His art label embodies his music: Understanding how an individual doesn't represent the whole.

TM Sisters are a Miami sibling duo who works in digital video performance, collages, VJing, fashion pieces and video games. Their techno, topical aesthetic shines through in an art label that depicts an epic pose of a flying woman shooting beams from her hands.

William Hundley is an emerging photographer and artist with an original style that captures surreal imagery through simple means. His art label features a dynamic photo that invokes a sense of wonder and encourages questions.

Date Farmers are an artist team that echoes Mexican-American heritage rooted in California pop culture. Their paintings, collages and sculptures—often featuring the dog—highlight duty and responsibility, keeping as close as they can to the truth.