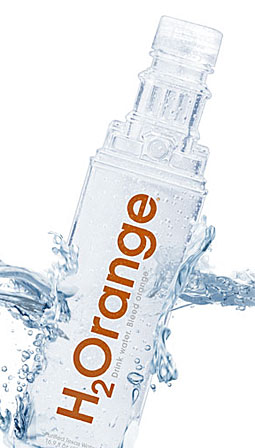 H2Orange, a new Purified Texas Water in a unique scale-model replica of the iconic University of Texas at Austin Tower, will raise millions of dollars for academic scholarships, fellowships, and internships at the University, it was announced today by UT President William Powers Jr. and GSD&M co-founders Steve Gurasich and Tim McClure.

Gurasich and McClure, the G and M in GSD&M, created H2Orange to help more deserving students attend the University of Texas. Every bottle of H2Orange purchased will help reach the goal of raising $1 million annually for the next 10 years and beyond.

“H2Orange represents a first-of-its-kind partnership between a cause-marketing movement and the University of Texas at Austin,” Powers said at the news conference announcing the initiative. This is the first time that the University’s iconic Tower has been licensed for a consumable product, and H2Orange is the first project to combine an iconic water bottle with funding for academic scholarships at a major university.

“Our battle cry is ‘Drink water. Bleed orange. Fund scholarships,’” McClure said. H2Orange fans will be able to see the impact of their purchases online at www.h2orange.com, where the dollar amount raised for scholarships will be updated regularly. Contests, partnerships and other H2Orange news and events will be announced and discussed on the website and on Facebook and Twitter.

“Through social media channels, Texas Exes and H2Orange Ambassadors we hope to inspire hundreds of thousands of ‘H2Orangebloods’ to join the cause,” Gurasich said. “Our aim is to take word-of-mouth to a new level by rallying UT fans to not only buy the water themselves, but also to tell friends about it and make sure their grocery stores, convenience stores and other favorite establishments proudly carry H2Orange.”

H2Orange will launch with significant distribution in Austin, followed by select distribution in major Texas markets as it rolls out this fall. H2Orange will be available at grocery and convenience stores; in select restaurants, bars and retail outlets; and in vending machines across the University of Texas campus. Participating retailers will be constantly updated on the H2Orange.com website. Plans are in the works for H2Orange to be available online for UT fans outside of Texas.

The University of Texas Tower is one of the University’s most recognizable symbols and an iconic architectural landmark for Austinites, Texans, and Texas Exes around the world. The 307-foot-tall Tower, designed by renowned architect Paul Philippe Cret, was completed in 1937. Through the years, the Tower has served as the University's most distinguishing landmark and as a symbol of academic excellence and personal opportunity. Based on Beaux-Arts principles of balance, axial arrangements, and symmetry, the Tower formed, in Cret’s words, “The image carried in our memory when we think of the place.”