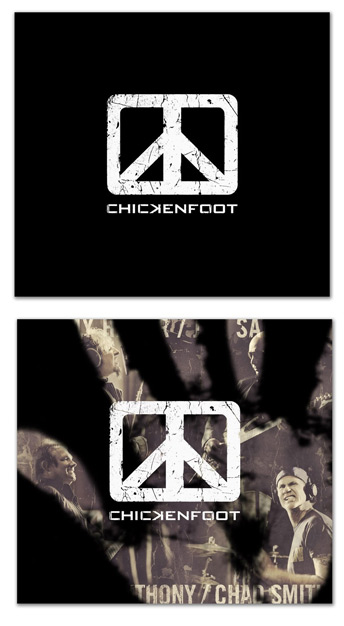 In the never-ending quest to grab eyeballs among music buyers, new supergroup Chickenfoot has launched its debut CD in packaging printed with a new thermal ink technology.

Get this – when just a little heat is applied, the top layer disappears and reveals whatever cool stuff is printed in a layer underneath. And, as demonstrated in the photos below, the heat from a hand is enough to reveal it.

Here’s what the printer Chromatic Technologies, creator of the process says about the cover in a press release:

The album packaging, when heated up by the simple touch of a hand, will change opacity, revealing hidden images on the cover and hidden song titles on the back cover.

"How was I going to design an album package for rock legends who have seen it all before?" said Todd Gallopo, president of Meat and Potatoes and designer of the Chickenfoot packaging. "The band and I agreed that the design had to be bold, iconic, and layered with texture like the music they recorded. It had to have a visual ‘aaahhh-ha!’ factor that pulled it all together. To achieve this, I knew I had to experiment with some kind of special packaging treatment. When I explored the possibilities of thermochromic ink, all the pieces fell into place. The band had their bold album cover, I had my ‘aaahhh-ha!’ moment, and the consumer will get to experience a different album package every time they pick it up."

This patented special effect ink, developed by CTI (www.ctiinks.com), is a new technology shaking things up in the world of marketing. It works by mastering the movement of a proton on the molecular level–essentially turning color "on" and "off." You can also find the unique ink on the "Cold-Activated" Coors Light beer cans turning the signature mountain range blue when the can cools to the perfect temperature.