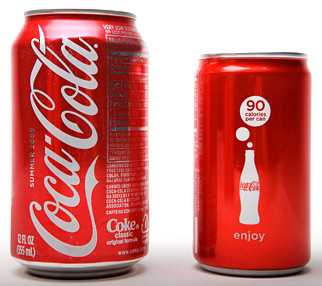 A little happiness in a stylish new package is coming soon to your refrigerator. Coca-Cola has introduced a new 90-calorie mini can to give consumers a better way to manage their calories.

The 7.5-fluid ounce mini can carries the distinct Coca-Cola contour-shaped bottle image in white with a red background. Additional brands that also will feature the sleek mini can packaging include: Sprite, Fanta Orange, Cherry Coca-Cola and Barq’s Root Beer. It will be sold in eight-packs.

Consumers in Washington, D.C. and New York City will get a first glimpse of the 90-calorie sleek mini can when it debuts in December. The rollout will expand to the rest of the country and be well underway by March 2010.

“The Coca-Cola mini can is a great option for smaller thirst occasions, and for calorie-conscious consumers,” said Hendrik Steckhan, president and general manager, Sparkling Beverages, Coca-Cola North America. “Our new sleek mini can supports the idea of moderation and offers people yet another way to enjoy their favorite Coca-Cola beverage.”

The package introduction comes in the wake of a recent global commitment from Coca-Cola to put calories front-of-package on nearly all its products. Coca-Cola also recently announced a new partnership with the Healthy Weight Commitment Foundation, which advocates a common-sense approach to helping reduce obesity by 2015. A core objective of the group is to remind consumers that achieving and maintaining a healthy weight is about balancing the calories consumed in a sensible diet with calories expended through physical activity.

“Research shows that calories count when trying to lose or maintain weight, so this 90-calorie mini can is another way for people who love Coca-Cola to get the taste they enjoy while managing their calories – taste, refreshment and hydration all in one can,” said Dr. Rhona Applebaum, chief scientific and regulatory officer, The Coca-Cola Company.