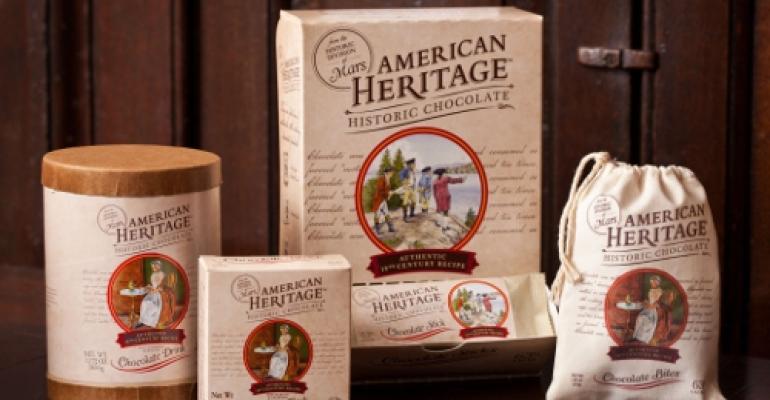 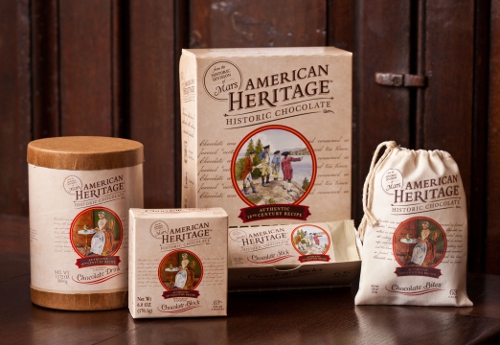 Mars Chocolate North America will debut an expanded collection of American Heritage Chocolate products—now including four different formats—available in colonial-inspired, commemorative packaging. The debut will take place at "A Celebration of Chocolate on the Bay," an event hosted by the San Diego Maritime Museum. American Heritage Chocolate is an authentic historic line of products-based on a recipe from the 1750s-that celebrates chocolate's important role in the lives of Americans during the 18th century.

American Heritage Chocolate is the result of a unique combination of Mars chocolate-making expertise combined with Mars historical knowledge and is now available in four formats for drinking, baking or eating:

American Heritage Chocolate continues to expand its distribution at living history partner sites across the United States and Canada and the product is currently available for sale at over 130 sites such as Colonial Williamsburg, Mount Vernon, Monticello, The National Archives and Parks Canada. Retail information is available at www.AmericanHeritageChocolate.com.

About American Heritage Chocolate:
In 2003, Mars Inc. undertook an extensive global research initiative to uncover the true history of chocolate. A group from Mars led a multi-disciplinary team of more than 115 experts from around the globe who accessed over 200 archives, libraries, museums and private collections to reveal chocolate's origin and history in the Americas.

"CHOCOLATE: History, Culture, and Heritage," has contributions from 45 authors, including researchers, culinary chefs, food scientists and historians from leading historic institutions, and was published in 2009 by Wiley.

Out of this research project, the American Heritage Chocolate brand was developed in 2006 by Mars Chocolate North America to help educate consumers about the history of our nation through the engaging story of one of our most beloved foods...chocolate! Fashioned off an ingredient list from 1750, American Heritage Chocolate is an authentic historic chocolate made from ingredients available in the 18th Century. The recipe represents a true taste of chocolate the way our ancestors would have enjoyed it.