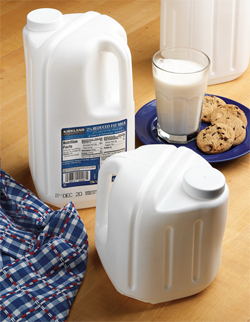 Dan Soehnlen of Superior Dairy, Canton, OH, believes that if something doesn't add value, it ought to be eliminated. He and his son Greg incorporated an innovation firm called Creative Edge to reinvent the way their 80-plus-year-old family dairy does business. Working with tightly knit employees and a few trusted vendors, they installed a highly efficient micro-dairy operation at the Superior Dairy facility that eliminates the need for milk crates. They no longer process 1-percent and 2-percent milk as separate operations. And they've done away with a host of unproductive labor and warehousing steps at their own and at their retail customers' locations. At the heart of this revolution are a brand new stackable bottle design from Creative Edge and an innovative new filler/capper from Serac, Inc. (www.serac-group.com).

Today, Superior Dairy ships 230,000 gal/wk from its micro dairy to customers in the northeast retail market. This is in addition to the output from its conventional dairy operation. The innovative micro-dairy approach allows it to serve a larger geographic region, and it allows their medium-size dairy to thrive in an environment ruled by giant dairy operations.

Creative Edge has taken the Soehnlens into a whole new business. Having made a considerable investment in developing the technology, the dairy now licenses it and provides technical support to other dairies. Another son, Mark Soehnlen, partner in Structura Architects, Ltd. (www.structuraltd.com), works with Superior to provide turnkey design, project management and construction services to build microdairies to order. Since Structura has been through the design and startup process at its own facility and at a handful of first clients, it has confidence in its expertise. 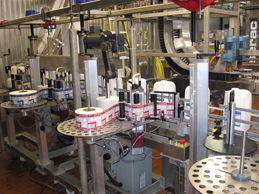 For each order, Superior prints labels for the bottles to be filled, and a bar-code scanner just before the filler reads the label to determine the type of milk to be filled.

The Soehnlens started by cutting away everything that did not add value. The first target was the crate. Milk crates must be loaded, unloaded, collected, shipped back to the dairy empty, washed, warehoused, reused and replaced (visit any campus and you'll find pilfered milk crates furnishing the dorm rooms). One of Superior Dairy's first big customers reported an added advantage. It had more health claims filed due to labor performed inside freezers than anywhere else. Eliminating milk crates reduced the time workers spent in the freezers.

The Soehnlens went to work on a new plastic milk bottle that would be sturdy enough to stack. It took considerable trial and error. The naysayers who said it wouldn't work even included the blow molders that ran their prototypes. In the end, Creative Edge was vindicated.

The new bottle includes a recessed pour spout that puts the top of the cap flush with the flat top of the cuboid bottle. The walls, top and bottom are reinforced with fluted structures for strength. Under the cap is a foil inner seal, heat-sealed in place. The solid seal allows the bottle to resist compression so effectively that the plastic walls of the bottle need only be slightly heavier than those of a conventional milk bottle. The full bottles are sturdy enough that they could be stacked six-high. However, at four-high, the Soehnlens can stack 224 gal on a pallet. A pallet stacked six-high with traditional milk cases holds only 216 gal. Thus, cube space in the truck is saved for stacking lightweight products like produce atop the pallets of milk. 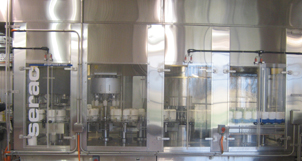 The filler has two filling heads. One fills 3.25-percent whole milk, and the other fills zero-percent, nonfat skim.

Creative Edge built a few consumer advantages into the bottle design, as well. It placed the pour spout and the handle on opposite corners of the cuboid shape so that the bottle would pour like a pitcher. It also rounded the bottom corner beneath the pour spout so that milk could be poured without lifting the bottle—a great advantage for consumers with less arm strength. To herald the advantages, it named it the Rock 'N Pour milk pitcher. Creative Edge also adds just enough white pigment to the plastic to protect the product from light, while still keeping the bottle translucent enough that consumers can see how much milk remains.

The Rock 'N Pour milk pitcher design needed a new method of filling and capping. Serac's team of North American engineers worked with each of the prototype gallon, half-gal and 3-L bottles that Creative Edge developed. Creative Edge and Serac continually redesigned a filler/capper until they had a bottle and machine combination that worked. The resulting machine reduces direct labor costs and provides an extended shelf life (ESL) product.

The Serac R16R16V8/1080 ESL netweight Monobloc filler/capper does away with the need for processing and filling 1-percent and 2-percent milk as separate operations. It also does away with downtime for switching from milk of one fat content to milk of another fat content. The filler has two 16-valve rotary fillers working in tandem. One unit fills 3.25-percent whole milk, and the other fills zero-percent, nonfat skim. As bottles come down the conveyor line, a bar-code scanner reads the label on the bottle to see what variation of milk should be filled. As the bottle goes through the two filling stations, the precise combination of nonfat and/or whole milk is filled to result in the fat percentage that is on the label. 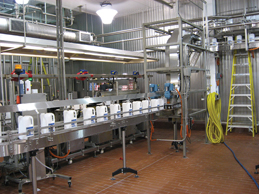 After passing through an induction unit that seals foil membranes contained inside the caps across the tops of the bottle, the containers are transported up a conveyor to an accumulation system.

The Serac filler precisely measures the milk that flows into the bottle, eliminating the need for a contact nozzle to penetrate the bottle and potentially add bacteria to the milk. Serac's noncontact, free-flowing, ultra-hygienic filling nozzle eliminates the slight overfilling inherent in the older technology, saving product while guaranteeing the consumers full value for their money. Without the contact nozzle, the Serac filler is much easier to maintain and clean.

The micro-dairy model is micro in three major ways. It allows for massive milk production (a capacity of 500,000 gal/wk currently) in a small-footprint facility. It reduces the direct-labor staff to four workers per shift. And it integrates all the production equipment into a microprocessor-controlled business system. Creative Edge says that it can integrate its proprietary software with the vast majority of business systems in use by dairies.

The system allows a facility to operate in a fully just-in-time mode. Milk is processed and bottled to-order, rather than warehoused. As bottled milk comes off the production line, it goes directly onto a pallet with other Superior Dairy products to fill a specific order. Within a short period of time, that pallet will be on a truck on its way to its retail destination. 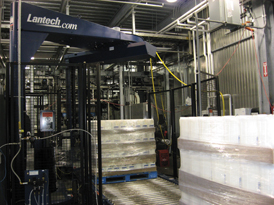 The unique bottle design allows a four-high stack to contain more gallon bottles than the six-high stack with the usual bottle design. After palletizing, the pallets are stretch-wrapped for shipment.

The entire facility is operated at near-pharmaceutical levels of cleanness, with dry, high-efficiency-particulate-air (HEPA)-filtered air constantly pumped in to keep a positive air pressure resisting the entry of any airborne contaminants. The walls are shielded in easy-to-clean stainless steel.

Superior also pasteurizes its milk at 180 deg F for 25 sec, extending its shelf life considerably. Testing has shown that Superior's milk lasts two weeks past its printed sell-by date. In fact, the combination of its ESL techniques and its immediate shipping, with no days wasted in storage, means that Superior's sell-by dates on the retail shelf are much later than its competitors. Consumers see the sell-by date, and they can consider buying two gallons rather than one.

The operation requires just four people per shift. One for blow molding the bottles, one for filling, one for palletizing and a forklift operator. Thus, Superior has the lowest direct-labor cost in the country. The facility has room to install a second blow molder and filler, which would increase the capacity to 1 million gal/wk in the same 20,000-sq-ft space.

A shrink-wrap station is built into the line that allows bottles to be packaged in pairs, fours or eights, if the retailer so desires. Bottles can also be palletized as individual units, so that a shrink wrap around the whole pallet is all that need be removed at the retail location.

Consumers enjoy the extended shelf life. They prefer the Rock 'N Pour pitcher design to the traditional gallon, which is difficult for children and the elderly to handle. And the economies built into production allows retailers to price the milk lower than conventionally produced milk—something that everyone enjoys.