Consumers and the growing quest for fresh 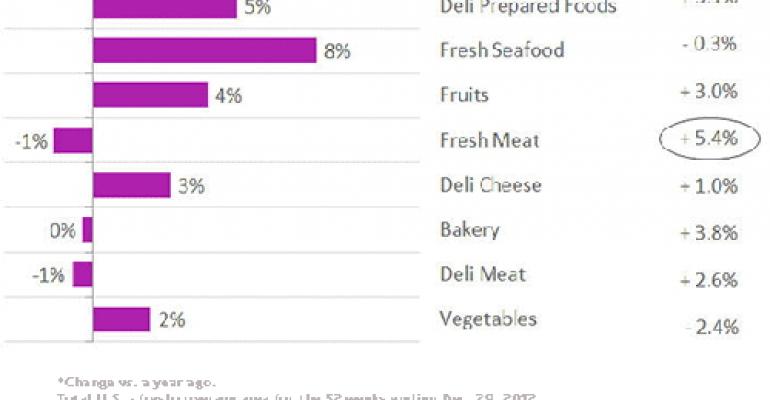 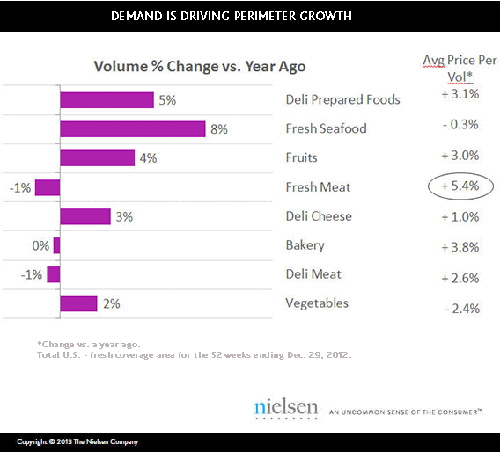 Prices for grocery items remain high, as unit prices in Nielsen-measured categories and retail channels have risen every month over the past two-and-a-half years. And the higher prices have consumers keenly focused on their budgets and how they spend their hard-earned cash. Many are finding, however, that it's cheaper to eat in than go out, which has been a boon to both food and non-food retailers that have responded to the situation by expanding their overall food offerings.

According to year-end 2012 consumer price index data from the U.S. Bureau of Labor Statistics, prices for grocery foods have risen less than restaurant food (1.3% vs. 2.5%). So while rising commodity prices have driven sales growth in almost all major retail departments measured by Nielsen, unit sales trends are a different story, as seven of 11 departments experienced flat or negative unit sales growth. Unit sales growth is occurring in departments where consumer demand is trumping higher prices.

"Consumers are adjusting their shopping behavior to the relatively high prices, but they're focused on meeting their demand for fresh foods and produce," says Todd Hale, svp, consumer & shopper insights. "Specifically, given higher prices, reduced promotion support, they're making trade-offs or buying less, especially in non-food grocery, dairy, fresh meat, dry grocery, general merchandise and frozen foods. Where are they buying more? Volume for fresh produce, health and beauty aids, and deli are all up on a year-over-year basis at the end of last year."

Demand is rising at the perimeter

The changes in buying behavior is sprouting growth at the perimeter-the areas of the market that sell fresh food items. In 2012, rising prices sparked dollar volume growth in all segments of the perimeter except seafood and vegetables, where prices had fallen from a year ago. It was consumer demand, however, that beefed up sales in the deli prepared foods, seafood and fruit areas. The lingering effects of last year's drought has prices up the most in fresh meat (+5.4%), yet volume sales are down just 1 percent. "Protein is still very much a part of our diet, but this reflects how some consumers are shifting spending away from higher-priced beef to less expensive pork and poultry", says Hale.

As consumers watch their budgets and their diets to match their lifestyles, value and convenience are important considerations. In fact, most store expansions since December 2005 (in terms of percentage increase in store count) have been outside the tradition food, drug, and mass merchandise outlets. The biggest growth has occurred among warehouse clubs, supercenters, dollar stores and convenience stores.

But supermarkets aren't fading away. Notably, 1,602 new stores have opened since 2005. There have, however, been a fair number of store closures and tear downs (followed by re-builds) during that period. In step with growing consumer demand for value and fresh, more than 67 percent of the growth in supermarket stores has come from niche retailers at polar ends of the supermarket spectrum. Within the niche space, 51 percent has come from deep-discount grocers and 49 percent has come from natural, organic and specialty grocers.

Natural/gourmet shops are in the driver seat when it comes to meeting consumer desires for fresh and natural. All of the operators in these areas opened new stores in 2012, and are poised to continue expansion in 2013 and beyond.

While niche grocers are connecting with shoppers and their desire for value, fresh and healthy, mainstream grocers maintain the overwhelming majority of the supermarket store count (89%). Although the grocery channel is the leader in fresh foods (accounting for two-thirds of the retail market), fresh is increasingly growing in non-grocery channels as retail channels respond to consumer demand for a greater availability and assortment of fresh products. Savvy retailers understand that consumers want the option to choose fresh foods anywhere, and they're fighting for the fresh share of wallet.