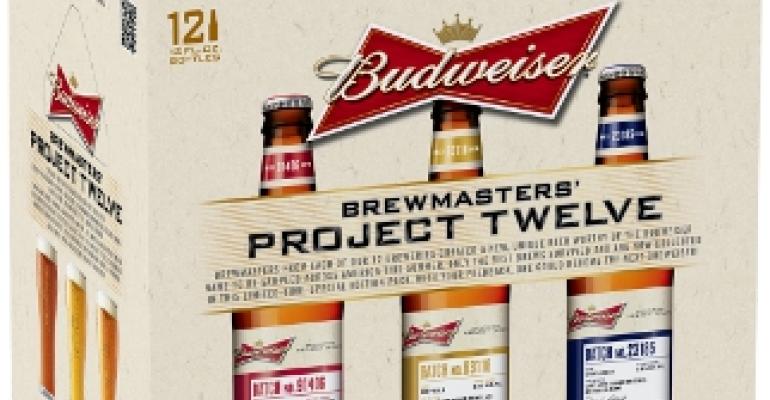 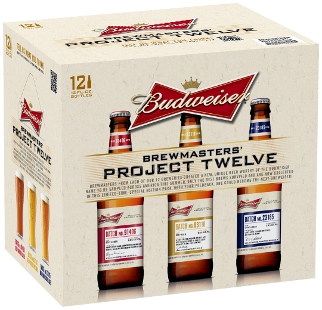 And then there were three.

"Project 12" started in the early spring when Budweiser's 12 brewmasters across America were asked to write a unique beer recipe worthy of the Budweiser name. After internal discussion and debate, six of the recipes were chosen to be brewed in small batches. Now, after a summer-long nationwide sampling effort involving thousands of consumers at dozens of events, U.S. beer drinkers have provided feedback, which helped Budweiser decide which three beers would be available for sale in a limited-edition sampler pack this fall.

The "winning" recipes, named for the ZIP Code in which the beer was originally brewed, are from brewmasters at the Budweiser breweries in Los Angeles, St. Louis and Williamsburg, VA.

Tens of thousands of consumers tasted and gave feedback about the Project 12 beers. This included approximately 10,000 festival-goers to the Budweiser Made in America music festival in Philadelphia over Labor Day weekend, where Budweiser's 12 U.S. brewmasters personally sampled the beers and asked for feedback. At other sampling events throughout the United States, brand ambassadors asked consumers to describe the taste, freshness, style and flavor of the six Project 12 beers, and to choose their favorites. Consumers also were able to enter feedback onsite via iPad stations.

"We've never done anything like this before," says Rob McCarthy, vp of Budweiser. "With all this feedback from consumers, I guess you can call this the largest focus group in Budweiser history, maybe even beer history. There really were no winners or losers with Project 12, but we wound up with three great beers that slightly edged out the others. It certainly wasn't an easy choice. Best of all, we listened to what our beer drinkers told us and we let them help us make the decision about what to bring to stores."

The limited-edition sampler pack, available for sale starting on Oct. 29, is a 12-bottle package containing four each of the special "ZIP Code" beers. These beers are:

• The beer was originated by brewmaster Bryan Sullivan in Los Angeles in collaboration with brewmasters Scott Ungermann in Fairfield, CA, and Dave Cohen in Houston.

• "Our collaboration team used caramel malt on Batch No. 91406, which gives the beer a deep amber color and a little more body," says Sullivan, whose signature will be on the bottle. "It has a little bit more hop character than our flagship Budweiser lager, but like Budweiser it's a very clean and refreshing beer."

• The beer was first brewed in St. Louis by brewmaster Jim Bicklein and was developed in collaboration with brewmaster Katie Rippel from Fort Collins, CO.

• "The original Budweiser brewery is, of course, here in St. Louis, so we wanted to honor our brewing heritage with a beer that uses ingredients that German immigrants, like our founder Adolphus Busch, would have used when they came to the United States," Bicklein says. "In this pilsner we use the same types of Hallertau and Tettnang hops commonly used in St. Louis during the late 1800s."

• The beer is brewed by Daniel Westmoreland from the Williamsburg, VA, brewery and was developed in collaboration with brewmasters Mike Anderson in Jacksonville, FL, and Dan Kahn in Cartersville, GA.

• "We took staves from fresh bourbon barrels and we aged the beer on those staves and spiced it with a hint of vanilla," says Westmoreland, who has been a Budweiser brewmaster for more than 30 years. "It's an all-malt brew, and it has a perfect color that is similar to the color of bourbon itself. Batch No. 23185 has a nice vanilla aroma with a little oakiness on the end—it's a great beer."

Budweiser will continue to request feedback from beer drinkers on these three beers. Via a QR code on the package, as well as an in-pack flighting sheet, the brand is asking consumers their opinions of these three new Budweiser-inspired beers. The flighting sheet also includes tasting notes and details about each beer for in-home tastings.

Other Project 12 beers
While not available in the fall sampler pack, the Project 12 beers developed in Baldwinsville, NY; Columbus, OH; and Fort Collins, CO, also received favorable feedback from consumers, creating a task for the team responsible for paring the six Project 12 beers to three.

All the beers developed for Project 12 pay homage to Budweiser's clean and crisp taste by using the proprietary yeast directly descended from the original Budweiser yeast culture used by Adolphus Busch in 1876. The yeast is still used by Budweiser today.

"Budweiser is an exacting style of beer to brew," says Peter Kraemer, a fifth-generation brewmaster who leads Anheuser-Busch's brewing operations in North America. "Our brewmasters are responsible for one of the world's most technically challenging beers and are able to make a high-quality beer that is consistent all over the United States and the world. Project 12 was a way for our world-class brewmasters to have fun experimenting with new ingredients, flavors and brewing processes to bring beer lovers some new options inspired by our flagship beer."

Anheuser-Busch's commitment to quality and its spirit of innovation have been defining characteristics of the company since its beginning. This passion helped the company expand from a local St. Louis brewery to a leader in the industry. Today, Budweiser's recipe for success brings together its proud heritage and talented teams to brew, package and sell some of the most popular beers in the world.