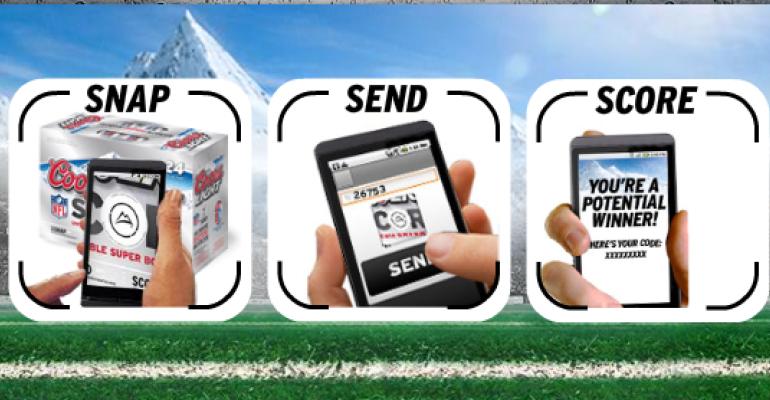 Any adult with a Smartphone can Snap a photo of the Coors Light SnapTag logo on packaging and other promotional materials and Send it in for a chance to Score a variety of unique prizes.

Coors Light is grabbing a piece of the Super Bowl XLV spotlight—and shining it on the fans. Beginning Dec. 15, 2010, and running through Feb. 6, 2011, the official beer sponsor of the NFL and Super Bowl XLV is encouraging legal-drinking-age-consumers to "Snap, Send, Score" for a chance to win unthinkable access to the biggest football game of the year and other great prizes.

Using SnapTag technology customized for this Coors Light promotion, any adult with a smartphone can Snap a photo of the Coors Light SnapTag logo on packaging and other promotional materials and Send it in for a chance to Score unique prizes. All eligible consumers will be vying for the "Super Bowl Insider" grand prize—a trip to north Texas with unthinkable access to Super Bowl XLV weekend.

"For Coors Light, the unthinkable is never out of the question, so the brand is excited to give fans across the country a chance to win prizes they would never expect, in celebration of Super Bowl XLV," says Rick Gomez, vp of marketing for the Coors Family of Brands. "As the official beer of the NFL and the Super Bowl, we're bringing fans closer to the game than they ever imagined possible by taking insider access to a whole new level."