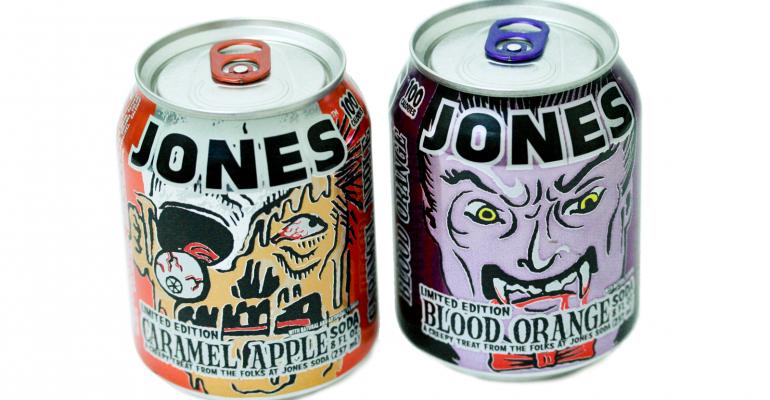 Following the success of last year’s newly designed Halloween cans from Jone's Soda, this year’s edition features two fun flavors that best represent this holiday. Both the Vampire Blood Orange and the Zombie Caramel Apple have been very popular with consumers, with enhanced graphics featured in this year’s edition that better showcase the bold and creative artwork that Jones Soda is known for. Matching colored tabs top off the look and make for a truly unique and visually eye-catching product.

It’s that time of year where summer is behind us and Thanksgiving steadily approaching which can only mean one thing—trick or treat!

This year’s Halloween season is poised to be bigger than ever as the National Retail Federation predicts total Halloween sales will reach $7.4 billion this year as Americans gear up for the holiday. That number is up from $6.9 billion in 2013, when an estimated 158 million people participated in Halloween activities.

Of the total $7.4 billion that the National Retail Federation expects U.S. consumers to spend on Halloween celebrations in 2014, about one-third of that amount will be spent on candy.

To capitalize on this spending, there is a plethora of products being launched in Halloween-themed packaging to commemorate the ghoulish holiday.

To see some of these spooktacular designs, click here to view gallery.

And it’s not just an American tradition anymore as the Halloween phenomenon has jumped shipped across the pond.

New research from Mintel reveals that retail sales of Halloween products in the UK reached £230 million in 2013 and are expected to grow to around £240 million this year.

“The profile of Halloween has started to climb in the UK in recent years and Britons are increasingly embracing this occasion. Situated between the end of summer and the run-up to Christmas, Halloween offers consumers a reason to celebrate during a relative lull in the calendar year. It appears that Halloween has evolved from being a largely child-focused holiday with a focus on trick-or-treating. Adults have now adopted it as a fully-fledged excuse to throw parties and dress up in ghoulish outfits.”