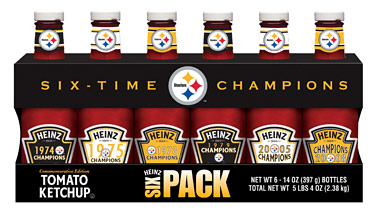 “As the sponsor of Heinz Field, we wanted to offer Steelers Nation a special remembrance of this victory. Heinz and the Steelers have always been great teammates together and the Heinz commemorative ‘Six-Pack’ seemed like a natural way for us to celebrate the Steelers and their storied history of success,” said Noel Geoffroy, Director of Heinz Ketchup.

Packaged in a special six-pack display holder, the Heinz commemorative “Six-Pack” as well as the individual 2008 championship bottle are available for purchase until the beginning of next season for $35 and $6 respectively at www.myheinz.com.

About: The H. J. Heinz Company