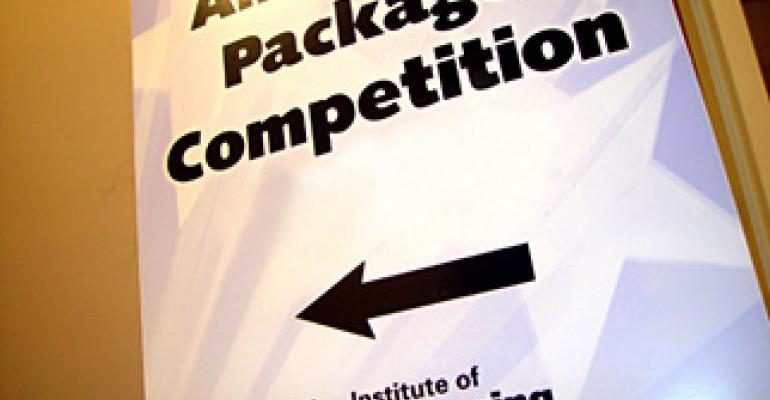 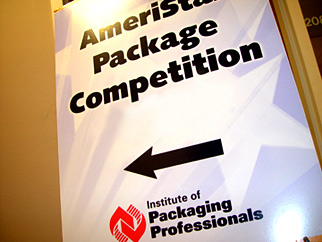 More than 150 professionals attended the 2008/2009 AmeriStar Awards Dinner on May 19 in Rosemont, IL. The dinner honored the best in packaging as well as the IoPP members who were honored for their outstanding service to the Institute and to the packaging community. This year’s College of Fellows recipients are Suzanne Fisher CPP, Anthony Gallo CPP, Noel Mertz CPP, Thomas Falls CPP and Robert Dennen CPP.

Her history at IoPP is equally impressive. She has served in various roles on the West Michigan Chapter of IoPP board. As a regional vp for IoPP, Fisher coordinated a mentor program with the student chapter at MSU. In 2002, she joined the National Board as vp of membership and visited nearly 50 percent of IoPP chapters within that year to build communication within IoPP. Fisher is the current chair of the National Board of IoPP, and she teaches an IoPP class called the Seven Steps to Sustainable Packaging course.

Gallo began his packaging career as an associate packaging engineer for ConAgra Frozen Foods R&D group. In his 11-year tenure with ConAgra, he worked on projects with responsibility over material selection as well as equipment design. Since then, Gallo has worked in a wide range of roles in technical sales, account management, research and development and international account development.

He currently serves as director of applications development for Associated Packaging Technologies(APT), where Gallo is responsible for focusing the company’s research to match the market demands. This includes the APT’s sustainable efforts, which fall under the umbrella of new applications.

In his nearly 40 years at Eastman Kodak Co., Falls contributed as the Super 8 Finishing engineer responsible for the installation of the new Super 8 Sound Packaging Line, assistant department head for the Motion Picture Film Finishing Division, Package Materials Development program director/coordinator and Special Projects and manager for Commercial Graphics World Wide Package Development and Savings. He was instrumental in the formation of the ASTM Certified Package/ Materials Test Laboratory at Kodak, initiated and directed the development of a high density densitometer to measure high light barrier films, developed test methods for measuring moisture barrier requirements for photographic product, instrumental in the development of a moisture barrier model for predicting barrier requirements for photographic products, named on a Patent for the development of a test method including equipment to measure Photographic Product Isotherms, and developed multiple non-foil barrier materials for Photographic Product use. He received patents for the development of an integral leader/package for the moisture/light protection of Professional 620 roll film and the development of an integral pull tab leader for the light and moisture protection and automated removal in an X-ray Daylight Loader.

Falls has served on the ASTM F-2 Package Materials committee and was named to multiple positions on the F-2 Board and Test Method Committees. He also volunteered his time in two roles at his IoPP chapter: event chair and principal fund raiser.

Dennen has held packaging engineering positions with Brown & Williamson Tobacco Corp., Rock-Tenn Co., Georgia-Pacific Corp. and Span-America Medical Systems. He has been employed by Yum! Brands in Dallas, TX, since 1999 and currently works for Pizza Hut as senior manager in R&D Engineering.

He has been an IoPP member since 1989 and served in national capacities since 2001. Dennen hosted the IOPP 2004 annual meeting at the Pizza Hut building in Dallas. His prior positions include Tejas Chapter president, vp of certification and vp of university relations. Dennen is currently IoPP’s executive vp of education. He also is active with the Foodservice & Packaging Institute (FPI), and serves on the Foodservice Packaging Advisory Council.

Dennen was awarded United States Patent number 6,612,429 on September 2, 2003 for his work on a flip-open package with microencapsulated flavor release. He also was a patent pending for a food product container.

This is the second time IoPP has bestowed the Honorary Life Membership award to Johnson in the last two years. In 1993, he joined Delta Companies Group, one of the largest volume liquid chemical contract drumming operations in the U.S., to develop and execute a business plan to build a world class liquid chemical packaging facility in the U.S Gulf Coast. This plant debuted in October 2008.

Johnson’s history with IoPP goes back even further than his tenure at Delta Chemical Group. He joined the the IoPP Chemical Packaging Committe (CPC)  in 1995 and has served as secretary to the Executive Subcommittee, chairman of the Drum, Pail, and Rigid Intermediate Bulk Container Subcommittee and chaired numerous Task Groups in CPC including the champion of the first CPC website. On May 4, 2009, Johnson was elected chairman of the CPC on May 4, 2009.

Grams joined Society for Packaging and Handling Engineers in 1976, which became IOPP. He is an account executive with Caraustar’s Converted Products Group and has been recognized as one of the top three Caraustar folding carton salesmen for 2008.

In his numerous elected and volunteer offices in the IOPP Minnesota Chapter, Grams helped secure its financial security. At the national level, Grams has chaired the Chapter of the Year Committee and is presently the IOPP North Central regional vp for chapters in WI, IL and MN. He joined IOPP’s College of Fellows in 2004.

Vaninger has forty years experience in packaging and materials handling, including stints at George J. Meyer Manufacturing and Barry-Wehmiller Co. He also founded Van Pak Corp., a manufacturer of packaging machinery, materials handling equipment, and robotic systems. He sold Van Pak Corp. to Bastian Materials Handling in 2005 and recently retired from full-time employment in the packaging industry. He now serves the packaging industry on a part-time basis as a consultant.

Kopecky began his career as a food research scientist with Armour and Co. He moved on to Kraft Foods Inc., where he progressed rapidly through positions as a packaging research scientist, assistant packaging manager and packaging manager. While at Kraft he implemented a series of programs that generated $3-5 million/year in savings in the production of rigid and flexible packaging categories; spearheaded the development of the company’s first Vendor Certification Program for packaging materials and developed and delivered a packaging awareness program that proved successful in improving product quality and safety.

Most recently, Kopecky served as a senior packaging project manager with Wm. Wrigley Jr. Company, where he played a major role in achieving the company earning the number-two position in the sugarless gum category by designing the packaging for Orbit tab gum. The packaging proved to be a powerful product differentiator and earned both a U.S. patent and the company’s Creativity award. Kopecky designed the tin and carton packaging utilized for the introduction of the Eclipse and Excel products into the U.S. and Canadian markets respectfully. He standardized packaging operations for Eclipse, Orbit White and Juicy Fruit pellet gum at three different production facilities and saved more that $3 million/year by modifying the blister and sleeve composition materials for Eclipse and Orbit White pellet gum. Kopecky has either singly, or in conjunction with others, has been awarded more than 10 U.S. patents.

In 2004, Kopecky was inducted into the Packaging Hall of Fame. In 2005, he received the Riester-Davis Award for lifetime achievement in food packaging technology. He also was elected into the IoPP College of Fellows for outstanding accomplishments in the packaging field and received the Institute of Food Technologists Founders sward for outstanding leadership of the Food Packaging Division. His other contributions to the industry include service as chairman, president and CEO of the IoPP and Chairman of the Food Packaging Division of the Institute of Food Technologists.

IoPP Member of the Year is Jane Chase CPP. Chase’s professional career includes roles in quality assurance, operations, processing and packaging with many of the big CPG companies including Imation, SC Johnson Wax, General Mills, ConAgra Foods and Ecolab Inc. Most recently, Chase served as vp of packaging R&D for US Foodservice

Chase has been involved in the packaging field for more than 20 years, and she has been a member of IoPP for 19 years. Chase’s various roles at IoPP include treasurer of the Minnesota chapter, president of the Minnesota chapter, vp chapters, evp of chapters, evp education and evp of operations. She currently serves as IoPP president. For the last seven years, she has chaired IoPP’s AmeriStar judging for the last 7 years and founded our Sustainable Packaging Technical Committee.

In 2003, Chase received the Pi Kappa Alpha Award. She was inducted into the College of Fellows in 2005.

The awards ceremony was one of many events at IoPP Packaging Summit, which was held on May 19-20 at the Hyatt Regency O'Hare in Rosemont, IL.

This year, IoPP introduced a new format for the summit, which focused on educational conferences and limited exhibitions to table-top displays.

with reusable Thermal-Lok insulation panels, is changing perceptions of the American packaging industry. “I would get comments from Europeans that they are surprised that a renewable, sustainable packaging like this is coming form the United States,” says Williams. He also presented a case study about how Walmart Specialty Pharmacy improved its cold-chain using Greenboxes. Faulhaber discusses how Genentech, a wholly-owned member of the Roche Group, evaluates contract

packaging operations to complements Genentech’s work manufacturing and commercializing medicines to treat patients with serious or life-threatening medical conditions. Among the gems of knowledge shared by Faulhaber is the five step process Genentech uses to create the internal packaging team: form a team; create a charter; identify possible suppliers, screen the long list of candidates and reduce to a shorter list; and determine a final decision-making governing structure. He also emphasized the importance of having quality machinery backed by competent manufacturers at a contract packager. “A few months ago, I was looking to outsourcing our clinical labeling,” recalls Faulhaber. “We noticed that this particular vendor used machinery that is associated with poor customer service. If we would have known that prior, we wouldn’t have wasted our time with this vendor.”

Anderson addressed the trend of some package printers moving from flexo back to gravure. “Flexo has been using digital plates since 1995,” he remarks. “Still, we see major players going from flexo back to gravure.” He attributed this move to perceived superior quality of gravure printing. “The typical issues facing brand owners using traditional digital flexo plates are a lack of predictability, consistency, repeatability and resolution,” he adds.

Sized as small as 10 microns, the SquareSpot dots are capable of producing images at 300 lpi. Anderson remarked that the higher resolutions enable package printers to add security elements to printed pieces by microprinting information within the artwork.

According to IoPP executive director Ed Landon, executive director of IoPP, the feedback from the event has been positive. At the event, Landon told PD that the organization is already anticipating that next year’s summit will be expanded and he is negotiating with the hotel now to ensure that the 2010 event will have adequate square footage. Landon is retiring from his position as executive director effective June 30, 2009.

Packaging Summit ’10 will be held May 18-19, 2010, at the Hyatt Regency O’Hare in Rosemont, IL. More information can be found at www.pkgsummit.com.