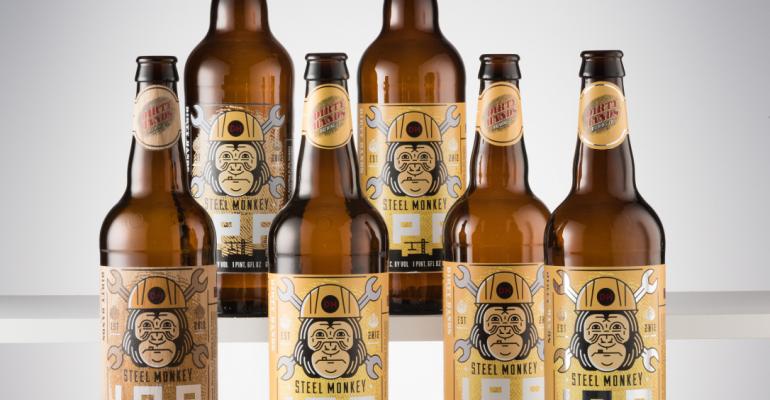 Craft beer bottles with the same label design but on different substrates reveals which materials grab the consumers' attention.

Packaging design is an important differentiator in the competitive craft beer category, with certain labeling materials catching buyers’ attention faster and driving purchase decisions, according to a recent study.

The study included 193 participants, male and female, ranging from younger than 21 to older than 65; 55% were 21 to 39 years old. More than 180 of the participants had made a retail purchase of craft beer within the preceding three months.

Participants wore eye-tracking glasses that recorded their eye movements as they viewed shelves stocked with the Steel Monkey bottles in combination with nine other brands of craft beer. All the brands were in 22-oz. bottles.

The glasses enabled the researchers to time how long it took for a participant to fixate on a label after it entered their field of vision. On this “time to first fixation” metric, white gloss film and wood veneer were the best performers. Metallized film was close behind them.

Yet another measurement, “fixation count,” identified how many times a participant visually scanned a product. The higher the fixation count, the greater the chance of purchase. On this metric, glossy film and clear film labels led the pack.

In additional findings, 62% of participants reported that the Steel Monkey metallic label caught their attention versus 38% for the paper, matte film, glossy film, wood veneer and clear film labels combined.

A white paper and infographic summarizing the study’s results are available from Avery Dennison.