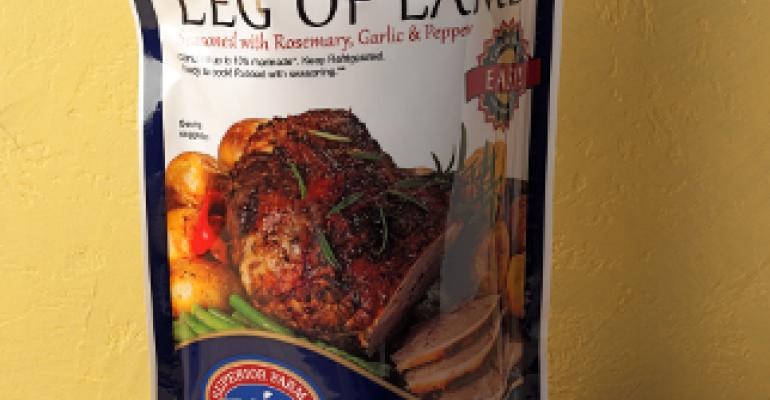 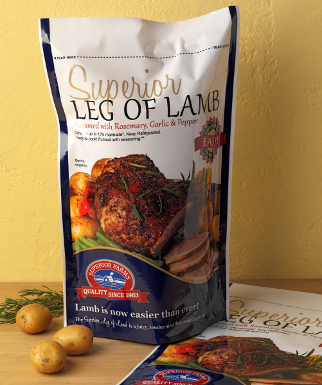 Forget meek. Superior Farms has gotten aggressive in recent years promoting lamb as an easy-prep, succulent meat worthy of gracing any table on any night of the week—and equally deserving of more space in retailers' meat displays. According to the 2010 National Meat Case Study, lamb's share of linear feet in the self-service case was just 3 percent.

Turns out there's good reason for this, though. Superior Farms conducted consumer research that revealed many people don't buy lamb because they think it's difficult to prepare, a perception the company is determined to dispel.

"We conducted focus groups, which gave us a lot of insight as to why shoppers are hesitant to pick up lamb. About a third of shoppers have never even tried it," says Gary Pfeiffer, vp of sales for Superior Farms. "So our flavor experts and packaging experts came together to give shoppers what they need—a fool-proof way to cook lamb."

In 2010, the company launched its Mediterranean Grill line of pre-seasoned, pre-marinated lamb products in case-ready skin-packed trays designed to draw in new customers (see our article at www.packagingdigest.com/MediterraneanGrill).

Following up on that success this spring, Superior Farms created standout stand-up pouches of Superior Leg of Lamb pre-seasoned boneless roasts vacuum-sealed in cook-in bags. The April 1 launch was timed to hit stores prior to Easter, a lamb-friendly occasion, along with in-store demonstrations at many retail locations the week before the holiday.

Priced at around $8 to $9 lb (about the same as a regular boneless leg of lamb), these lamb legs weigh approximately 5 lbs and are seasoned with a classic lamb flavor profile—rosemary, garlic, salt and pepper—that has mass appeal.

Each roast has a pop-up timer that indicates when the internal temperature reaches 145-deg F. Angela Gentry, Superior Farms' director of marketing, says, "People can either cook to their desired doneness or simply look to the pop-up timer to know when the meal is ready." 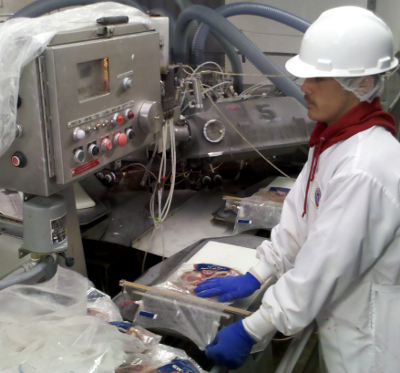 Lamb as a meal option is getting some outside help—"Marinated meats are becoming more popular ,and lamb is increasing in visibility with the help of television networks and magazines," explains Gentry—but the package still does most of the heavy lifting at point of purchase.

"We felt it would be confusing to have any instructions printed on the cook-in bag or on labels that people would have to remove," Gentry says. "A second, outer bag with graphics seemed like a good option that consumers would understand—there are similar packages for turkey, too."

Created by graphic designer Amy Bishop of Sacramento, CA (see her portfolio at https://picasaweb.google.com/amyshareebishop), the package showcases a photo of a cooked leg of lamb that Gentry says is "appetizing to help people understand what the finished product will look like." Also, prominently placed on the front, a starburst touts the package's main attributes: "Easy! Cook in the bag with pop-up timer." A notch and "TEAR HERE" instructions with a dotted line give consumers a start on opening the pouch easily, too. 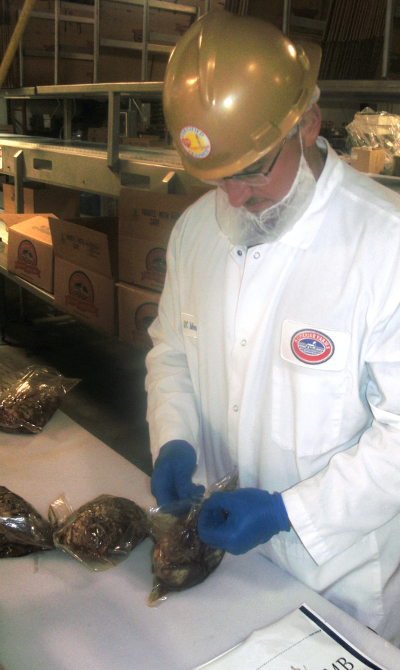 If the outer pouch sells consumers on the product for the first time, it could be the inner cook-in bag that gets them coming back time after time. Supplied by Sealed Air, Cryovac Food Packaging, the Oven Ease bag conveniently goes from refrigerator directly to conventional ovens. Cooking in a bag keeps the lamb leg juicy and tender because it retains its moisture and marinates while it cooks, delivering the promised foolproof results.

Superior Farms receives clear, pre-made 2.5-mil bags in a 9x19-in. size. But Oven Ease is also available in 2 mil for lighter products and 3 mil for more abusive applications or bone-in meats; as well as in widths from 8 to 16 in. A rollstock version of Oven Ease is currently in the works, too.

The multilayer nylon bag withstands temperatures of 375-deg F for up to four hours, as well as 10-deg F for meats to be frozen. Designed with a sealant layer, Oven Ease can be sealed on standard vacuum-packing equipment—so food companies can offer value-added products like marinated lamb without capital cost. And the material provides a shelf life of 28-plus days.

Introduced in 2009, Oven Ease has quickly gained attention for its advanced cook-in packaging technology, even winning a Silver Award for technical innovation from the Flexible Packaging Association's 2011 Flexible Packaging Achievement awards. Shawn Harris, marketing director for Sealed Air's Cryovac fresh red meat products, explains the innovation is in the barrier that Oven Ease provides. Even though Superior Farms is using an outer pouch to boost shelf appeal and provide instructions, products packed in Oven Ease could be sold without an outer pack. 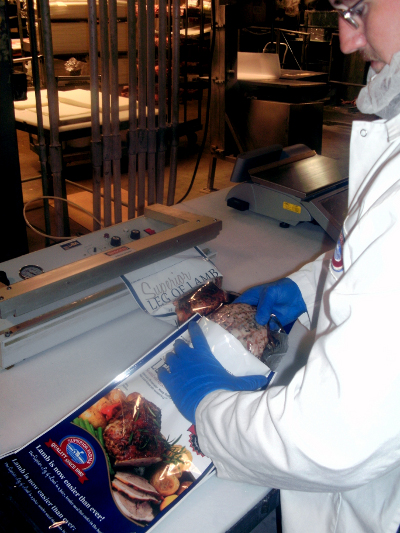 Aside from good barrier, the vacuum bag also provides a level of food safety for Superior Farms' customers. Because the meat goes right from the outer pouch into the oven, consumers don't need to touch the uncooked product, which prevents potential cross-contamination during at-home food prep. Superior Farms does recommend that consumers cut a small slit (about 1/8-in.) in the bag prior to cooking, though. Smith says this is just a safeguard, to take pressure off the seals as the bag inflates during cooking; although they have not had an issue with seals letting go.

In fact, the Oven Ease bag keeps meats contained and hot in the package hours after being removed from the oven, according to Cryovac. This impressive "holding" time is a key selling feature for foodservice operations.

Time matters in the consumer's kitchen, too, but in a slightly different way these days. "Convenience cooking is more than four minutes and a ding in a microwave," Harris says. "People want to be engaged in what they're doing. This allows the person who's preparing the meal to feel that they're more engaged in the meal preparation."

Smith adds, "Yet one of the great beauties of this is (that) Oven Ease is going to allow a consumer to come in at five o'clock, preheat the oven, put this in the oven for an hour or whatever and go about whatever else they have to do. It's unattended cook. No clean up. No preparation."

There's a financial aspect, too, that appeals to today's budget-conscious consumers. "People don't really want to experiment with a (high) retail ring and mess it up," Harris says. "People, especially younger people—Millennials—want to try different flavors and different cuts and they just aren't experienced enough to do it on their own. This enables them to do that." 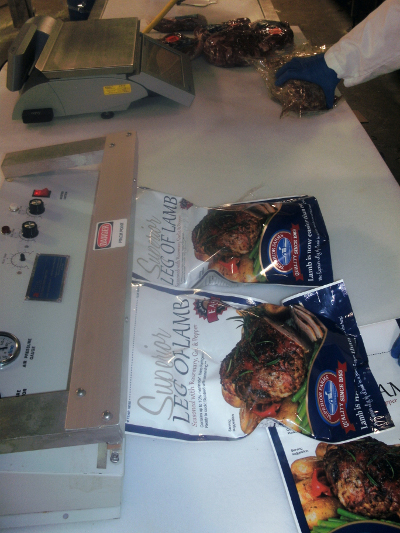 Although the packaging material was relatively new, the equipment to put a packaging line together already existed. Superior Farms had all the systems it needed for this project in house at both its Dixon, CA, and Denver, CO, facilities.

Here are details of the Dixon operation, which is a mix of manual, semi-automated and automated processes:

The process starts with vacuum tumbling to add brine and seasoning to the legs of lamb. Product is then transferred in totes to a station where two workers manually apply netting by feeding the meat through a stainless steel loading horn and cutting off the netting with a knife. The netting holds the muscle groups together in a roast shape and helps keep portions from getting dried out during cooking. A pop-up timer from Volk Enterprises is manually inserted, and the product moves to the next station.

Here, a worker manually loads a Cryovac Cook Ease bag onto another horn, while another person feeds the netted leg into the bag. Filled but open bags are conveyed to the infeed of the rotary Cryovac 8600 vacuum sealing system, where a worker positions the product so the top of the bag lays across the bottom side of the impulse heat seal bar. The vacuum chamber closes down on the bag, removes all the air from the bag and then applies heat to seal the top of it, thus preserving the vacuum status. Speed on this line is about 20 to 25 rpm but the system can be run at about 35 cycles per min.

As sealed bags exit the vacuum chamber, they are rinsed in a water bath to clean off any escaped seasonings or marinade and then pass under an air blower for drying as they are conveyed to the next packing station.

Sealed bags are visually inspected by an operator for quality, making sure the seal is intact and that no marinade is on the outside of the bags. The "use or freeze by" date is added with a manual pricing gun to flat outer pouches as they're queued up for filling.

Roasts are inserted into the outer retail pouch by hand and placed in a semi-automatic Cryovac BW 25 bag sealer so the package is sealed just above the tear-open notch on the side of the pouch. The 25-in. bar is wide enough to seal two pouches at once, with a seal time of 0.5 sec at 72 amps and 32 volts.

Superior Farms has done dry rubbed legs of lamb before, but Gentry says this was the first product that it is tumbling and also packing in a cook-in bag. 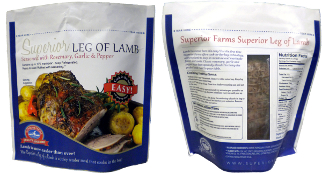 "This packaging really wowed our customers," Gentry says. "With lamb prices high this spring, buyers were timid to try something new. But we had a few pilot programs that showed good results that we are going to take with us when we re-pitch the product for the winter holiday season. We'll also be offering both a 5 lb and a 2.5 lb leg in the fall and winter to give people the option for either bigger family gatherings or more intimate dinners."