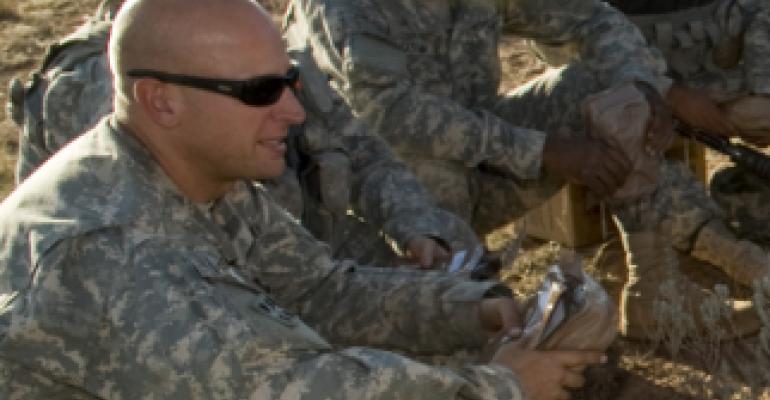 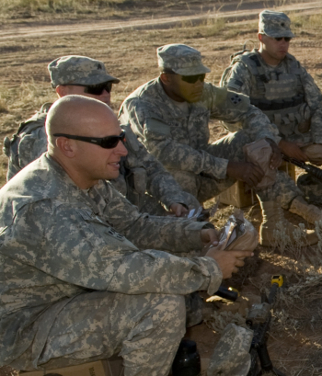 For a sense of what's ahead for combat rations, check out offerings at one of the many sit-down chain restaurants that have sprung up like mushrooms around the country and outside many military bases.

Food scientists at the Natick Soldier Research, Development and Engineering Center near Boston look to Applebee's, TGI Friday's and other popular chain eateries for inspiration in their quest to provide warfighters the kind of food they'd seek out at home if they weren't deployed, explains Jeremy Whitsitt, technology integration analyst for the center's Department of Defense combat feeding directorate.

So "Meals, Ready to Eat" and other combat rations the Natick center develops for all the services are a blend of comfort foods such as the ever-popular beef stew, old standbys such as spaghetti and meat sauce and an increasing number of ethnic selections, particularly Italian, Mexican and Oriental dishes, he says.

A Southwest beef and black bean dish introduced in 2010 is "quickly becoming a favorite," Whitsitt says, along with a Mediterranean-inspired chicken with tomato and feta cheese course also added that year. Ratatouille and Santa Fe rice and beans entrees made their debut in 2011. This year, Asian pepper steak and Mexican chicken stew went into production.

"We try to stay true to what our demographic is eating when they are not on the battlefield, and I think our current product offering reflects a lot of that," Whitsitt says. "With the advances in food science and processing technology and packaging innovation—and I think most warfighters would back me up on this—I think we actually have a very good, current, trendy product offering out there now."

Keeping up with changing culinary trends in developing combat rations is a never-ending process. "We run a continuous product improvement program," Whitsitt says, balancing what troops want to eat with other considerations such as nutrition and field-worthiness.

Achieving that balance is no hit-or-miss proposition. There's a ton of science behind it, with food scientists factoring in challenges that the popular eateries they strive to emulate simply don't have to contend with.

MREs must be able to maintain their quality for three years if stored at 80 degrees Fahrenheit, or six months when exposed to more extreme temperatures. They must satisfy the surgeon general's strict nutritional requirements, with specific standards for calories and for composition of carbohydrates, protein and fat.

Even more challenging, they have to be packaged to withstand being airdropped by parachute, free-dropped from 100 feet and subjected to rough handling and extreme temperature swings.

But no matter how well MRE items perform in these tests, they never enter the military inventory until they survive the toughest test of all: the troop taste test.

Every year, a team of product developers, food scientists, nutritionists and consumer researchers travel to field training exercises to hear firsthand what troops think of current combat rations referred to as the "control group" and some of the most promising prototype entrees.

"We collect a lot of data, and from that data we boil it down to: here are the top-rated items from the new group, and here are some of the lowest-rated items from the control group," Whitsitt says. Those findings then go to a joint-service operational rations forum, which approves eliminating the least-popular current selections and replacing them with the highest-rated new ones.

Based on overwhelming service member input, "country captain chicken," a cross between chicken a la king and chicken and dumplings, got scratched off the MRE menu board back in 2005. The veggie omelet followed suit in 2009.

Last year, white albacore tuna, chicken and dumplings, the veggie griller and Mexican corn got dropped from production. This year, the same fate fell to the hamburger patty, Buffalo chicken and Mexican rice.

Whitsitt acknowledges that decisions about what foods stay or are introduced and which ones are dropped is challenging because "somebody's least-favorite item might be somebody else's most-favorite item."

But he says he's convinced that a product improvement process based 100 percent on customer recommendations and feedback is paying off. "A lot of the comments that we get hint to the fact that we are pleasing most of the people most of the time," he says. "And when it comes to food, that probably is the greatest compliment you can get, considering you are talking about 2.2 million warfighters."

Tales of military rations falling short of the mark in the past have become the stuff of legends. During Operations Desert Shield and Storm in 1990 and 1991, Army Gen. Colin Powell, chairman of the Joint Chiefs of Staff at the time, reportedly was so dissatisfied with the state of MREs that he summoned the director of the combat feeding program to his office. As the story goes, Powell held up an MRE and rendered the simple order: "Fix it."

Since then, 241 new ration items have been added to better reflect what warfighters want, and the fixing continues. "There is always room for improvement," Whitsitt says.

In that quest, the researchers at Natick and their industry and academic partners are pushing the envelope in food processing and packaging to broaden the array of foods they can deliver.

One, which the FDA approved in 2009, involves pressure-assisted thermal sterilization—basically, using high pressure rather than intense heat to sterilize MREs and other combat rations. The benefit, Whitsitt explains, is less protein degradation during processing and improved taste, texture, odor, flavor and overall product quality.

The FDA also approved another technology Natick advanced with its partners: microwave-assisted thermal sterilization that heats packaged foods uniformly to kill any bacteria. In the past, microwaves heated foods unevenly, either "overcooking" the entire product or heating some parts enough to kill the bacteria but leaving some parts below that "kill temperature."

These new processing methods open the door for improving the quality and acceptability of combat rations, while also expanding their product offerings, Whitsitt explains. This could include foods that couldn't stand up to standard sterilization methods, such as fish and seafood. Using the new methods, "you can actually start to see something like a salmon filet in an MRE, which is unheard of right now," he says.

Caffeine, for example, is known to increase people's cognitive abilities when they're fatigued or under stress. So Natick food scientists have come up with a caffeine-infused meat stick, and also are looking at other ways to deliver caffeine, possibly through a bar, gum or candy product, Whitsitt says.

They're also exploring innovative ways to boost physical and cognitive performance by lacing foods with naturally occurring compounds such as curcumin and Omega 3s, he says. Curcumin is an anti-inflammatory supplement, and Omega 3s found in fish oils promote a broad range of functions, including reducing cholesterol and heart disease. New research also suggests they play a role in preventing traumatic brain injury—an obvious concern on the battlefield, Whitsitt reports.

Several new food items being developed at Natick incorporate Omega 3 fatty acids in a chicken chili dish and also bakery items such as cookies and cakes.

As some Natick researchers strive to improve food processing and foods themselves, others are studying ways to reduce the weight of the rations.

"We know that the warfighters already are sometimes carrying 75 to 100 pounds on their back, and the last thing we want to do is to add more weight or unnecessary weight for them," Whitsitt says. "So we are looking at ways to reduce that weight in rations—while still maintaining the proper calorie count so they have the proper nutrition, the proper energy and the proper percentages of fat, proteins and carbohydrates."

Whitsitt says there's a clear understanding at Natick that the work done in the food lab has a direct impact on the mission—and the health and well-being of those carrying it out.

Napoleon Bonaparte famously observed 200 years ago that an army marches on its stomach. And despite all the changes that have taken face in warfare, Whitsitt said, that adage still holds true, impacting warfighters every single day. "They may not fire a weapon every day or drive a Humvee or [mine-resistant, ambush-protected vehicle] every day, but they certainly are eating every day," he says.

Natick's focus, Whitsitt says, is to make that experience as beneficial and positive as possible.

"Our whole mission is to ensure the joint warfighter is the best-fed warfighter in the world," he says. "And we take our mission very seriously, because we truly feel that we are fueling the Defense Department's most adaptive and flexible weapons platform, which is the individual warfighter."