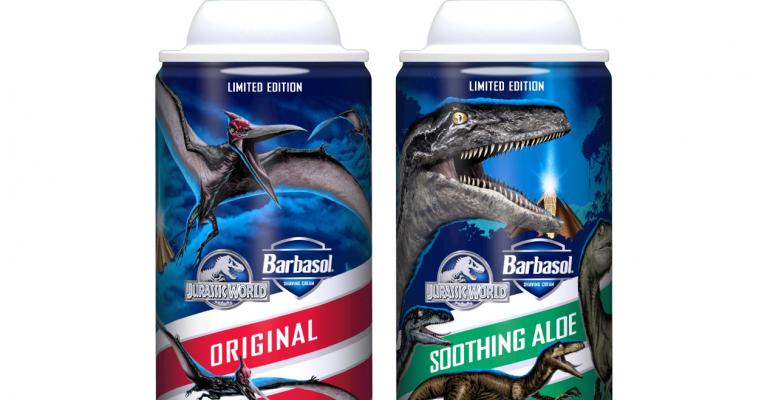 With the release of Steven Spielberg’s “Jurassic World,” the dinosaurs are back—and not just in theaters. Perio Inc., in partnership with Universal Pictures, has created limited-edition, co-branded packaging designs for Barbasol shaving cream. The cans are decorated with images of roving and flying dinosaurs in addition to the partners’ logos.

Dinosaurs are a rarity, to say the least, on health and beauty aids (HBA) packaging. But they are a natural for the Barbasol brand, which first made its mark on the “Jurassic Park” franchise when a Barbasol can was used in the original 1993 film as a dinosaur-embryo carrier.

To make Englert’s illustrations come to life (so to speak), Crown Aerosol Packaging USA printed the cans on a six-color offset-lithography press. After printing a standard white base coat on the cans, Crown printed all the graphics, plus varnish, in just one pass through the press.

From a brand perspective, “the challenge was to maintain a certain amount of Barbasol’s brand identity, when the Jurassic figures have obviously taken over the can,” says Janice DeLisio, plant manager of Crown’s Midwest Graphics Center. “There were actually two brands that we had to maintain. We had to maintain the ‘Jurassic World’ logo, and then of course the Barbasol logo.”

Technical challenges included maintaining true colors for the packages’ color-coded stripes and for Barbasol’s shield-shaped logo. The brand owner “wanted us to maintain the Barbasol dark blue signature color, which is a special ink, and the lighter blue that is in their logo. That’s where the real challenge came in, because the dark blue was part of the background, as well,” DeLisio explains.

In recognition of the project’s complexity and superior results, the Intl.  Metal Decorators Assn. (IMDA) awarded Barbasol’s limited-edition packaging a 2015 IMDA Award of Excellence in its annual Print Quality Contest.

The limited-edition 10-oz. cans launched in May and will be available nationwide, while supplies last, in supermarkets, drug stores and major mass-merchandise chains.