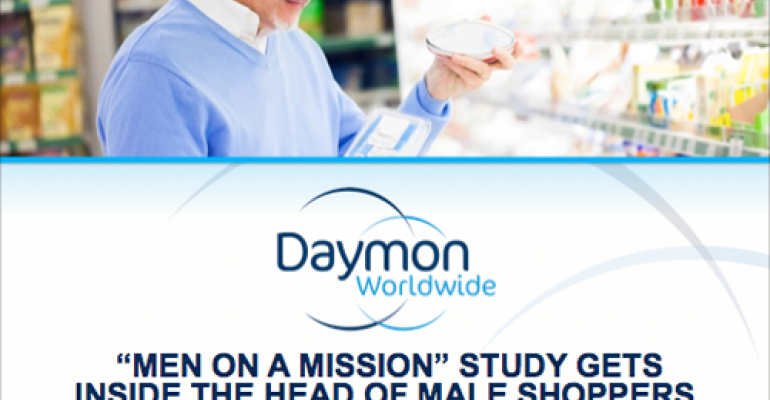 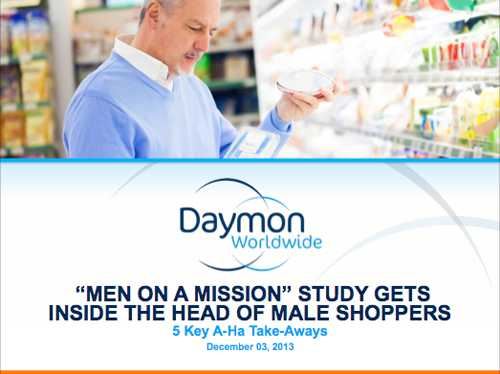 According to the study, 52 percent of primary male shoppers in the US are personally responsible for about 78 percent of all groceries purchased for their household in the last month, so they represent a huge financial opportunity for retailers ready to respond with customized products and services.

"While females and mothers have long been the focus for grocery retailers, males and fathers now represent a major business opportunity," says Daymon Worldwide CEO Carla Cooper. "We've seen a few recent ‘snapshot' male shopper studies that have quantified this demographic segment, but we felt strongly that we needed to provide the industry with a more comprehensive analysis of exactly who these male shoppers are, what they believe about themselves and how they differ from each other. These are the building blocks for retailers and manufacturers to create the right mix of products and services to maximize purchases and increase loyalty."

According to Daymon Worldwide's Chief Marketing Officer Andres Siefken, the results were intriguing. "Nearly 50 percent of all US men make mission-oriented trips to shop for a specific item or group of items, including take out to eat at home," says Siefken. "Additionally, 60 percent of male shoppers are personally responsible for all or nearly all of their household's grocery shopping."

According to the study, male shoppers can be segmented into six archetypes based on their attitudes and feelings about gender roles, cooking and shopping for their household. All of these archetypes view shopping as mission-based trips but each with a slightly different perspective. These include:

• Traditional Male (15 percent) - A slightly older group of men who are more set in their ways and would like to turn back the clock to more traditional gender roles. They are big fans of home cooking, but likely believe it should be done by the woman of the house.

• Modern-Day Male (12 percent) - These are more forward-thinking male shoppers that believe in equality, and enjoy being active participants in sharing household chores and cooking. They also enjoy home-cooked meals, but might prefer being the actual chef.

• Primal Male (14 percent) - This group tends to be older and often believes they are the dominant sex and can better handle cooking and shopping roles compared to their female counterparts.

• Confused Male (19 percent) -This younger group of men tends to be in a state of confusion when it comes to gender roles. Possibly unconsciously, they think women should do the cooking and cleaning but another part of them doesn't want to offend women, and looks to appease them. They also often struggle with their identity and hesitate to show off their feminine side.

• Discerning Male (20 percent) - These highly educated men usually command a higher income and share many similar traits to the Modern Day archetype as they also believe in equality, supporting their spouse in any way needed, and owning many of the household chores. They are more involved in food shopping, and focus on the highest quality options. They are also somewhat more likely to tap into their feminine side.

• Heckled Male (20 percent) - Similar to their Confused Male shopper brethren, this group of men do their best to avoid conflict and will bend to the will of the women in their life. They strongly believe in equality, the splitting of household chores and are not afraid to show their feminine side. But they don't want to challenge the women in their life and may even have felt "beaten" down in their past relationships.

"All of these male shoppers approach the task of grocery shopping much differently than women," says Siefken. "They are much less likely to make lists, cut coupons or look at store circulars but will spend more time doing the actual shopping. They are also more likely to shop alone - a luxury many women with children don't have - and prefer afternoon, weekday store visits. All of these behaviors offer invaluable perspectives for retailers interested in customizing their offerings to attract and retain male shoppers."

Each of the six archetypes regularly embark on six specific types of "mission-oriented" occasion-based shopping trips, some of them more regularly than others. These missions can be described as follows:

• Well MAN-nered (13 percent) - Male shoppers who go on this mission are seeking to purchase items that show that they care, and to accommodate special entertaining occasions that will allow them to impress their families and friends while enjoying the process. The "Confused Male" shopper often falls into this segment.

• Stockpiling the Man Cave (10 percent) - Male shoppers that take this less sophisticated, "search and retrieve" approach to shopping usually do so in preparation for entertaining or hosting a more informal gathering like tailgates for sporting events, game nights or hanging out with friends. The "Primal Male" archetype often falls into this segment.

• On DeMANd (23 percent) - Quick and easy convenience is the endgame for male shoppers who go on these types of missions as they look to pick up something quick for dinner, either from the grocery store or take-out from a restaurant. The "Traditional Male" shopper archetype often falls into this segment.

• Man-Shape (13 percent) - This trip is all about achieving a healthier lifestyle. Male shoppers on this mission are willing to take their time to explore the store to find their favorite healthy product offerings, or even try something new. Both the "Discerning" and "Heckled" male shopper archetypes often fall into this segment.

• Crowd MANagement (26 percent) - This mission-oriented trip calls for more robust shopping occasions geared to find something for everyone at the table. These trips are usually done early in the day, and involve browsing and searching for appealing options. The "Modern Day" male shopper archetype often falls into this segment.

• Man-riety (15 percent) -- These occasions are about switching things up or trying something different. There is an exploration component to these trips as shoppers are looking for something out of the ordinary. The "Confused Male" shopper often falls into this segment.

"Armed with detailed accurate information about the growing male shopper population, US retailers and suppliers can provide customized products and services that will keep them coming back for more," says Siefken. "To tap into each of the male shopper archetypes and corresponding mission-based trips, there are specific implications for every single retailer according to its market and strategy."