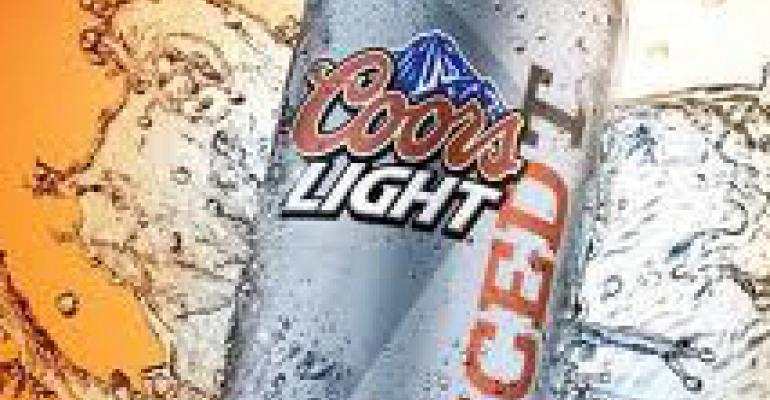 With peak summer  season right around the corner, Molson Coors Brewing Co. is showcasing a global lineup of product and packaging innovations designed to deepen consumer connections to core brands like Coors Light, Miller Lite, Molson Canadian and Carling, as well as build its portfolio to meet emerging consumer demands. From Coors Light Iced T to Cold Activated Aluminum Pints and a new Blue Moon beer, the summer selection of cold, refreshing brews is heating up.

"Through innovation, we are able to create excitement and interest among consumers and build brand relevance and loyalty, effectively connecting consumers to our brands and growing our business. Innovation is the keystone of our competitive advantage," said Peter Swinburn, president and chief executive officer of Molson Coors.

After water, tea and beer are the second and third most consumed beverages in the world. Ready-to-drink tea is a major grocery trend with more than 1,500 new products introduced in North America since 2000. Coors Light Iced T adds a new twist to the trend through its unique combination of refreshing flavors, perfect for consumers seeking the ultimate in refreshment this summer.

Another expected favorite is Carling Zest, a limited edition lager for the U.K. and Ireland. Carling Zest offers a light citrus flavor and 2.8% ABV, making it the perfect summer beer and ideal alternative to other popular summer drinks. Drinkers in the U.K. and Ireland will also enjoy several new seasonal variations from Worthington's, beginning with Worthington's Spring Shield - a light golden, citrusy brew with a hint of wheat malt. Spring Shield will be followed by Summer Shield, Autumn Shield and Winter Shield, each designed to perfectly match their season.

Tapping U.S. consumers as part of its innovation strategy, Blue Moon Brewing Company announced a new brew, Caramel Apple Spiced Ale. Through the "Craft the Next Blue Moon" program, Blue Moon fans helped guide the brewing process, voicing their opinions on beer styles, ingredients, packaging designs and names via social media. Caramel Spiced Apple Ale will be available in time to toast to the next blue moon on August 31, 2012.

U.S. consumers will be treated to additional brews this fall and winter like Lemon Berry Shandy and Snowdrift Vanilla Porter from Jacob Leinenkugel Brewing Company. Driven by consumer demand and interest, MillerCoors is rolling out its pre-Prohibition style lager, Batch 19, to national audiences. The company also recently acquired Crispin Cider Company, giving it a significant standing in one of the industry's fastest-growing categories and offering drinkers an alternative that still delivers a crisp and refreshing taste.

"Our foundation for innovation is the insights we glean from our drinkers," said Kandy Anand, president of Molson Coors International and executive lead for Molson Coors' Brand and Innovation Council. "Each of our packaging innovations begins with listening to what consumers want - a colder, smoother beer experience."

Led by a consumer-centric approach to innovation, MillerCoors recently introduced aluminum pint bottles for Coors Light, Coors Banquet, Miller Genuine Draft and Molson Canadian. Great for outdoor occasions, the aluminum pint packaging can be resealed after opening, making it the perfect picnic, park or campsite companion. A favorite for consumers, the pints also display the cold-activated mountains designed to tell drinkers when their beer is ice-cold. Carling will also be introduced in a new aluminum bottle this year in the U.K.

Other MillerCoors innovations designed to enhance the beer-drinking experience include Miller Lite and MGD Punch Top Cans and Grip Cans. Punch Top Cans increase airflow, resulting in a smoother pour, and research shows key beer drinkers prefer the new Punch Top design three-to-one. The cans will be rolling out by Memorial Day. The new Grip Cans use tactile ink technology to create a "grip" around the can designed for easier holding. The first grip cans will feature branding for Mexican soccer team Chivas de Guadalajara and, in the fall, the Miller Lite grip can will feature NFL branding.

Innovation in 2012 comes on the heels of 2011 successes, with the introduction of Cold Activated bottles and cans and the launch of several new products, including Carling Chrome and Animée in the U.K. and Ireland and Molson Canadian 67 Sublime in Canada. Over the past three years, innovation has delivered more than $100 million of incremental gross profit for the company.

To learn more about innovation at Molson Coors, visit www.molsoncoors.com/Innovation