Monster Cereals reunited on the shelf 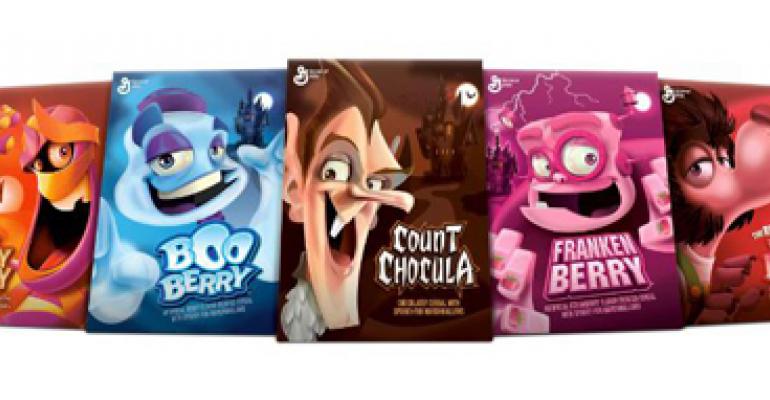 While Count Chocula, Franken Berry and Boo Berry appear regularly around Halloween, their old friends Frute Brute and Yummy Mummy will join them this year for a monstrously delicious reunion.

Monsters Cereals have gained a faithful following over the years. Fans eagerly look forward to the seasonal release; collect monsters-inspired clothing, dolls and artwork; and dress as the characters for Halloween.

"Boomers and gen-Xers grew up with the Monsters Cereals," says Ari Zainuddin, marketing manager with General Mills. "Saturday morning meant cartoons and a bowl of Count Chocula or Franken Berry. They want to share those memories with their kids and this seasonal favorite brings back all kinds of fond family nostalgia."

More than just a tasty treat, the monsters have become iconic Halloween figures, each with their own story and personality.

Considered by some to be the most popular of the monsters, Count Chocula is a vampire who prefers chocolate to blood and is well recognized for his tagline, "I vant to eat your cereal!" First introduced in 1971, Count Chocula cereal combines chocolaty cereal made with whole grain corn and colorful marshmallow shapes.

Franken Berry is a cuddly, pink version of Frankenstein's monster, introduced shortly after Count Chocula. This ghoul still wears the same chain-link suspenders he did when he was first created in 1971. Franken Berry cereal combines delicious strawberry-flavored cereal made with whole grain corn and colorful marshmallow shapes.

Boo Berry was first introduced in 1973 as a blue ghost with a purple tie and hat. The cereal has monstrous blueberry flavor from combining blueberry-flavored frosted cereal made with whole grain corn and colorful marshmallow shapes.

A rambunctious werewolf wearing striped overalls, Frute Brute joined the gang in 1974 and was discontinued in 1982. Frute Brute cereal, made with whole grain corn, combines fruit-flavored cereal with lime-flavored marshmallows.

The fifth monster arrived in 1987. The cheerful Yummy Mummy is wrapped in rainbow colors. Yummy Mummy cereal, made with whole grain corn, combines fruit-flavored cereal with vanilla-flavored marshmallows. It was discontinued in 1990.

To learn more about Big G Monsters Cereals, visit http://monstersmediakit.com/. Count Chocula, Franken Berry, Boo Berry, Frute Brute and Yummy Mummy cereals will be available for a limited time at retailers nationwide for a suggested retail price of $2.50 per box.