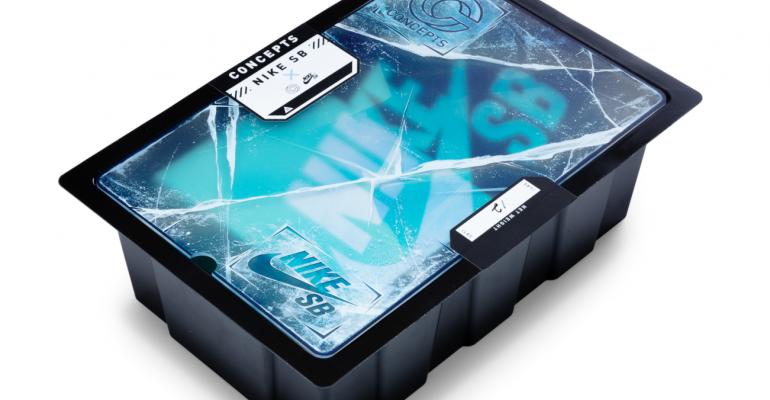 The packaging at the retail event, and for consumers who bought Green Lobster Dunks online on launch day, comprised the thermoformed box topped with a 1/8-inch-thick sheet of acrylic decorated to look like a frozen lake. The co-branded acrylic lid snapped into the top of the container, where it perched on a ledge formed into the box. Inside the thermoformed container was a customized paperboard shoebox holding the Green Lobster Dunks plus accessories that included shoe laces and lobster-claw rubber bands.

A mere five weeks before the launch event, Concepts enlisted custom thermoformer Dordan Manufacturing Inc. to make the Green Lobster package a reality. What followed was a journey rich in package engineering and thermoforming ingenuity.

The project presented Dordan with several technical challenges based on requirements that included package rigidity and the box’s deep draw. “The initial concept was designed with no understanding of the thermoforming process, as it was intended to be produced via injection molding. However, due to the time restraints and the high-capital expenditures required for injection molding tooling, it wasn’t a viable option. Things like draft, draw ratios and radii were not included in the concept,” says Chandler Slavin, Dordan’s sustainability and marketing manager.

“Therefore, we had to redesign, making compromises between what the client was envisioning and what was possible from a tooling and thermoforming perspective,” she adds. The final thermoformed box met Concepts’ requirements while enabling “efficient production of consistently high-quality parts.”

From the outset, Concepts knew it wanted an extremely rigid, thick container for the thermoformed box. In addition to conveying brand quality, the container’s rigidity would serve a structural purpose. “The containers were to be stacked up to 10 high at retail and therefore required enhanced structural elements to increase the rigidity to allow for support,” Slavin says. Dordan’s redesign of the box included enhanced vertical ribs to provide that structural strength.

To provide thickness and the matte black finish Concepts desired, Dordan chose black, 80-mil virgin high-impact polystyrene (HIPS)—the thickest material that can be formed into a roll and thermoformed inline. 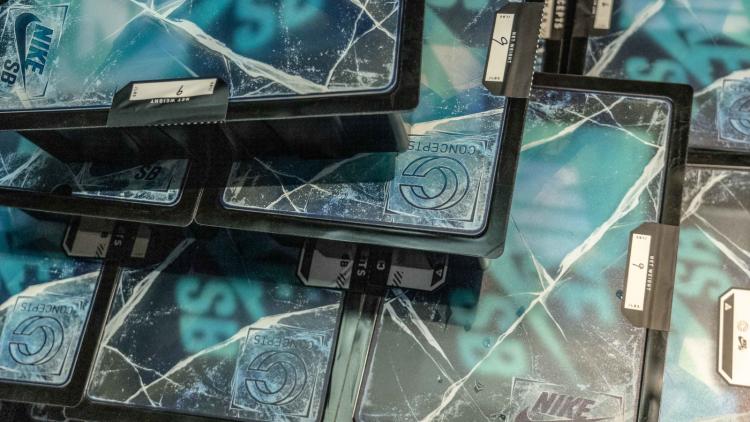 The box’s depth pushed the limits of thermoforming technology in a different way. “Our thermoforming machines’ max draw was significantly challenged with this part. The paperboard shoebox itself was close to 5.5 inches, on top of which we had to add the depth of the acrylic sheet. Thus, the depth of this part was right at the limit of our forming capabilities,” Slavin explains. “The depth just met the maximum distance that the platen can move, based on the framework of the machines themselves.”

Thermoforming the box without losing too much thickness at the bottom of the container was another key concern due to the depth requirements.

To overcome the bottom-thinning issue—and minimize the visual disruption of flow lines created when heated plastic meets the lower-temperature thermoform tool—Dordan engineered a tool with tiny teeth-like cavities that secured the plastic in the tool.

“When the assist plugs mounted on the pressure box came down on the plastic to push the plastic into the tool, the teeth locked up, orienting and holding the plastic taut within the footprint of the form tool,” Slavin explains. “It was important to control process inconsistencies that are inherent in thermoforming. The goal was to form the most structurally consistent and robust container.”

By improving control of the plastic’s orientation during forming, the modified form tool enabled more consistent material flow into the tool. The result was a container with minimal flow lines and a bottom thickness consistent with the walls of the container. 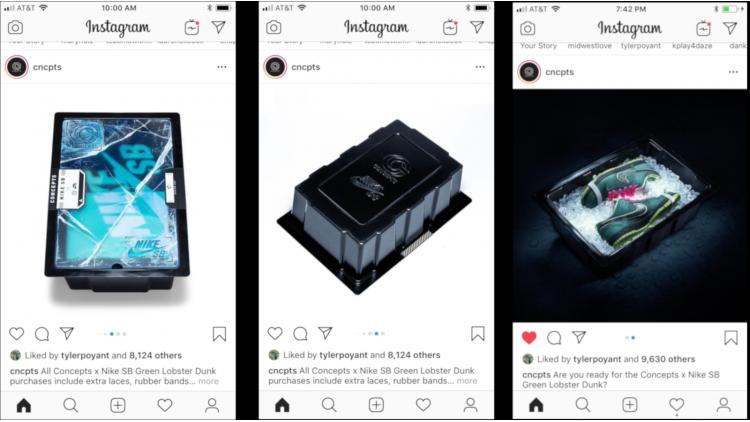 Logos on bottom, lid on top

Concepts’ desire for crisp, defined logos molded into the bottom of the thermoformed box posed yet another challenge. To achieve this without compromising the box’s strength, Dordan machined a short male platform into the base of the female tool and engraved the Nike SB and Concepts logos into the platform. This approach kept the logos from protruding past the bottom edge of the box, ensuring its structural integrity.

The package’s die-cut acrylic lid, which was produced by a different packaging supplier, posed another concern. The lid producer was relying on Dordan’s dimensions of the inner shelf on which the lid would sit.

“Due to the project time restraints, the acrylic manufacturer was not able to wait until we began production to verify the shelf dimensions,” Slavin recalls. “Consequently, we were only able to provide a ‘best guess’ for the acrylic, which was based on the anticipated material shrinkage and meeting the aggressive manufacturing tolerances that we were targeting.”

The thermoformer’s calculations were so exact that the finished acrylic lids and thermoformed boxes had a friction fit. Because of this perfect fit, a large decal to cover the lid and secure it to the box—a feature of Concepts’ original package design—was deemed unnecessary. Ultimately, only two small decals were needed to secure the lid to the box. 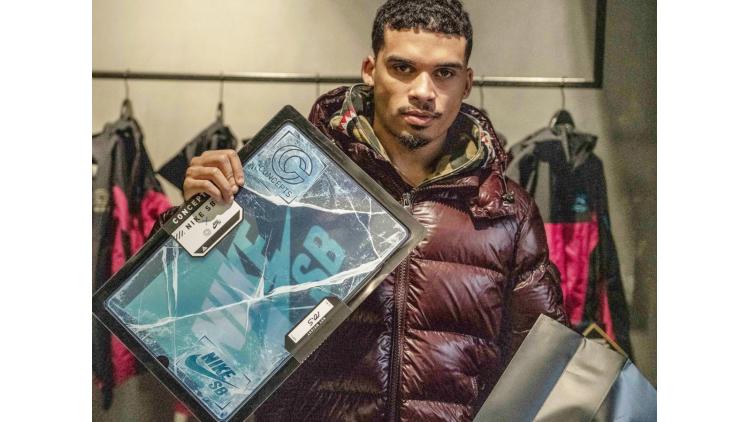 Concepts was highly satisfied with the resulting package, and the sneakerheads who bought Green Lobsters in-store and online at the launch appreciated receiving the specialized, high-end packaging.

Overcoming the project’s many technical challenges took “a deep awareness of the complex interactions between thermoform part design and production,” Slavin says. It was a matter of “understanding thermoforming, not as a hard science, but as an elegant dance between plastic, heat, vacuum and pressure.”

EastPack 2019 (June 11-13) is the region's premier packaging event connecting professionals from companies like PepsiCo, Pepperidge Farms and Mars with suppliers offering the latest packaging technologies, including a range of automation solutions, from semi-automatic equipment to sophisticated "smart" systems. Register to attend today!