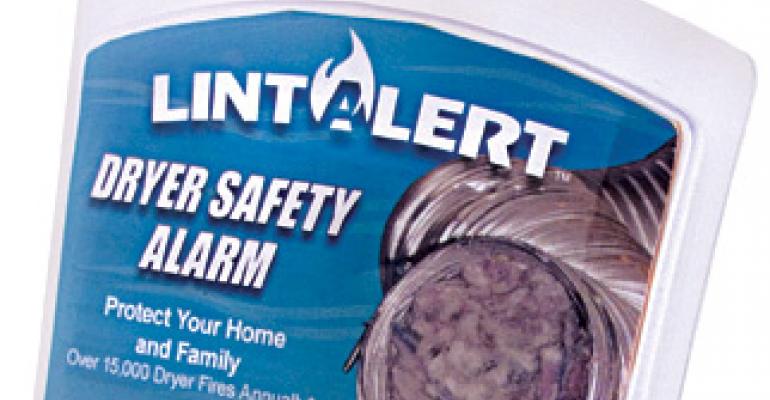 Listen to Rick Harpenau, owner of In-O-Vate Technologies Inc., talk about the countless news articles that he has read about dryer fires and you'll soon learn why this inventor was compelled to create LintAlert. “It was just phenomenal all the property damage, injuries and loss of life that were happening because of dryer fires,” says Harpenau. “It was obvious that there was nothing out there that provided notice to a homeowner that lint buildup was costing them in dollars and safety.”

Harpenau devoted three years to the research and development of the device, which uses pressure differential technology to detect a blockage or restriction in the vent system. But before he could debut LintAlert to a worldwide audience of thousands of industry professionals at the 2009 National Hardware Show in Las Vegas, he would need to create packaging that would securely hold the multi-part device.

Harpenau began the packaging project by getting a real-world education on electronics packaging design and its trends. “I went to stores and actually bought a lot of products and studied what was attractive, what worked for me and what most people did,” he recalls.

After examing several packages, Harpenau determined product photos would be an essential part of the graphic design. He took all product photos himself and worked with In-O-Vate's vp of marketing ,Todd Peach, to incorporate the photos into the card design.

“Todd's very strong in the marketing and the artwork parts of our business, and he has contributed a lot to this project,” remarks Harpenau. Peach's experience includes more than five years as vp of sales and marketing at BankSys Management Inc.; more than five years as director of strategic marketing at AdQuest Solutions; in addition to serving as advertising director for Trans World Publishing. In these positions, Peach primarily oversaw the graphic design work versus executing it but he became heavily involved in the design and garnered plenty of experience with Adobe Systems graphic design programs.

Using his experience with Adobe InDesign, Peach created the printed card design for the package. Executing the artwork internally enabled Peach and Harpenau to easily tweak the design until they felt all design elements from product photography, models used, type and layout were precisely what they wanted.

For the structural design of the clamshell package, Harpenau brought in a thermoformer partner to refine and prototype package designs. This did not go as smoothly as the graphic design process. “We were not happy with their prototypes,” Harpenau remarks. He ended that relationship and began searching for a new packaging supplier partner via the Internet.

In his research, Harpenau came across VisiPak, a global manufacturer of extruded and thermoformed packaging and a copacker. He liked the robust size of VisiPak's operation and the fact that it also could do the copacking. “One of my goals was to be sensitive to the labor involved in packing the different elements of the device and keep costs down,” Harpenau comments. Because VisiPak would be copacking the device, it would be able to optimize the package design for efficient packout right from the start.

Using Pro/Engineer 3D CAD/CAM/CAE software from Parametric Technology, VisiPak developed two packaging concepts for In-O-Vate. Three-dimensional models generated from Pro/Engineer were presented to Harpenau, who chose one of the designs to be built as a prototype.

Harpenau used the prototype to review how the product fit in the package and made changes accordingly. “For example, he changed the position of one of the components that fit inside the packaging,” says Phil Brewer, director of product development for VisiPak.

After only three prototypes and one month of collaboration, the design was finalized: A thermoformed clamshell with multiple pockets that woul protect the different components.

To keep costs down for the initial run, the first run of packages were manufactured in a rigid PVC. from Klöckner Pentaplast of America Inc.

Keeping in mind the importance of retailer environmental scorecards such as Walmart's, the LintAlert clamshell was designed to allow VisiPak to manufacture future packages in PET, an option that VisiPak reports LintAlert will use for future clamshells. 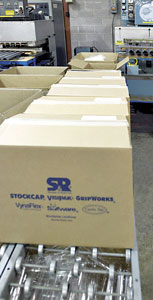 Manufactured on a Sencorp Series 2500 thermoformer at a rate of approximately 3,000/hr, the clamshell has multiple pockets that protect all three major LintAlert components.

The multi-part SmartTap fitting goes into another contoured pocket on the back of the package, which provides containment for the small parts used in the fitting. A 6-ft-long section of flexible tubing, which is used to connect these two components, is coiled into another special section.

All product components except the flexible tubing, which VisiPak manufactures using extruders from Davis Standard, are shipped to VisiPak from their manufacturers. In addition to the package and tubing, VisiPak provides the printed card through its partner, CardPak.

These trays are then moved to six-person manual pack-out lines. Operators manually place components into clamshells, ensuring proper placement in all the special sections . Filled clamshells then are conveyed to a Cosmos Electronic RF sealer.

In time to win awards

The clamshell packaging project was completed in time for Harpenau to debut the product as planned at the National Hardware Show, he says. There, LintAlert captured three awards: Homewares Show Awards; the 2009 New Product Launch Spotlight award; and a 2009 Retailers Choice award.