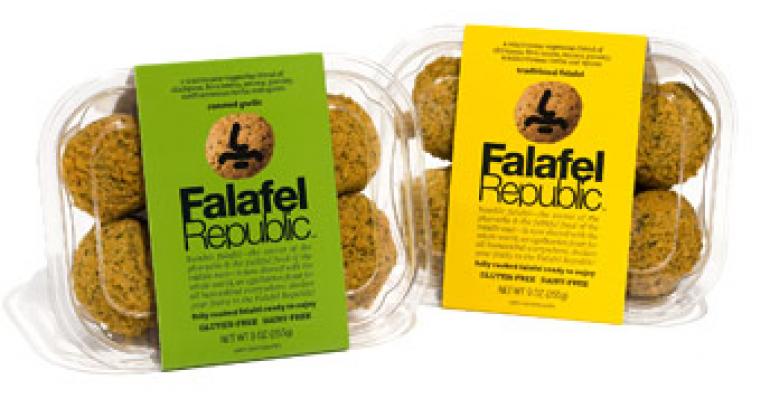 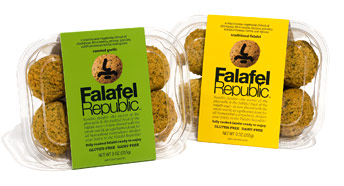 Humble falafel, the secret of the pharaohs and the faithful food of the Mediterranean, is now shared with the whole world by food packaging design whiz Mark Oliver of MOI. Declaring their fealty to the Falafel Republic, the branding team has created a sales dynamo.

Falafel Republic falafel, based on traditional Middle Eastern cuisine, is a blend of chickpeas, fava beans, onions, and exotic spices. Falafel Republic’s founder, Greg Bukuras, says, “While falafel may be a new food to some, it is believed to have originated some 4,000 years ago.”

The positioning, naming, branding, and package design of “the secret of the pharaohs," are the brainchild of brand consultancy MOI, also known as Mark Oliver, Inc. Exotic products are no stranger to the firm. "We're known for being able to take a new product concept and find its true place in the market," notes Mark Oliver, principal of the firm.

Bukuras approached the agency with the idea for a falafel product. The MOI team conducted a trend study and discovered that market conditions were good for such a product. Falafel shops and stands were popular in New York City and elsewhere, and falafel was popular with young professionals, a key demographic.

The challenge was the positioning of the product to the consumer. Oliver notes that where some would have built product appeal around the fact that it was vegetarian protein substitute, "as America’s fascination with international food trends and authentic ethnic foods continues to grow, we learned that the street appeal of falafel was in its ethnic, middle-eastern origins as well as its inherent healthiness. But to capture the attention of our target consumer, we also had to appeal to their sense of fun, fashion, and food."

These insights led the MOI team to create the "Falafel Republic," a fictitious state that offers an "egalitarian feast for all humankind everywhere," bringing vegetarian falafel into each household, pre-cooked and ready to enjoy.

Using bright colors, contrasting fonts, a prominent creative story-line, and a bold falafel ball character, the branding and packaging convey the flair required to appeal to the consumer. A see-though container assures the consumer of the freshness of the product and creates appetite appeal.

The Falafel Republic earned a score of 92 out of 100 possible points from Supermarket Guru. The package design received a perfect score. Falafel Republic was also featured on NBC’s Today Show.