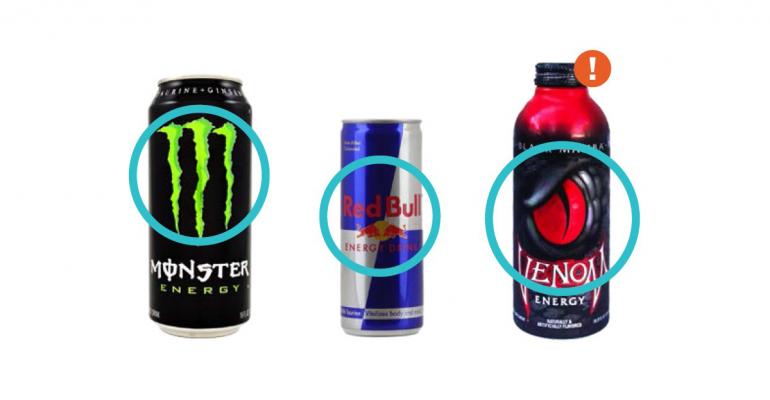 Energy brands that performed best all offer an enticing and often alarming icon on the can.

Real-world examples highlight a graphics-heavy, takeaway-rich report on beverage packaging winners and losers from Affinnova, which shares surprises and advice in this Packaging Digest exclusive.

We asked Mike Black, manager of marketing and communications to interpret the surprises and feedback the company found from the report and to share advice for Packaging Digest readers.

What has been the biggest surprise to the findings?

Black: The surprising finding is not that package design is important, but just how underleveraged it is relevant to its cost. In 2012, Coca-Cola spent $5 million on advertising for its NOS brand, which was considerably more than other brands, including Monster, and saw its market share decrease. What that tells us is the Coke’s advertising and distribution superiority can’t overcome NOS’s largest challenge, which is a lack of differentiation and inability to stand out at shelf. Investing in a package redesign would cost Coca-Cola a fraction of its advertising spend and help ensure that the demand being driven by advertising would translate to actual sales.

What advice do you have for brand owners?

Black: One, setup a program for evaluating package design on a regular basis:  The store shelf landscape is constantly changing. Consumer perception of your package design will change relative to every change your competitors make to their package design. It’s critical to remain proactive about any threats or opportunities for your brand.

Three, evaluate designs in a competitive context: When undertaking a package redesign, be sure to evaluate potential designs against competitors to understand the true market impact and to see if your design will increase or decrease share.

What kind of feedback have you received to date?

Black: It’s not easy for brand managers to understand how their design is performing against competitors, so many marketers have been contacting us see how their specific brands did—where they are weakest and strongest. One of the more notable (and probably unrelated) updates since we published the report has been Coca-Cola’s investment in Monster. It was apparent from the audit that Coca-Cola’s two brands—Full Throttle and NOS—were having a difficult time differentiating in the market. Now Coca-Cola can benefit more fully from Monster’s success.

What else is worth pointing out?

Black: Clearly, America’s love affair with soda is ending: Overall soda volumes fell an estimated 3% in 2013, the ninth straight yearly decline and more than double the 1.2% decline in 2012, according to Beverage Digest. This means soda giants Coca-Cola and Pepsi will need to work twice as hard to catch up in other beverage categories where they are the “new kids on the block”—categories such as enhanced waters, energy drinks, sparkling water and liquid water enhancers. Because supporting all these brands with advertising while maintaining their core soda brands will be nearly impossible, there is a real opportunity for Coca-Cola and Pepsi to use package design as a more cost-effective way to gain advantage. We see that happening already with Coca-Cola’s new Minute Maid offering in water enhancers, which is performing extremely well with consumers based on response to package design.

The full report can be accessed at www.affinnova.com/beverageaisle.