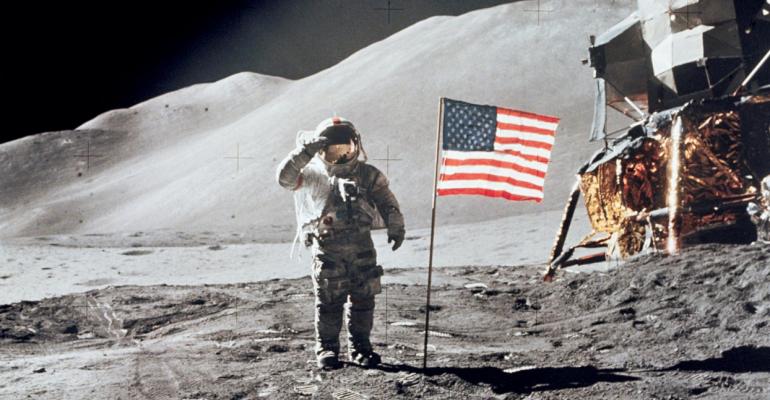 More than five decades ago, it was quite a leap for packaging engineers to design and produce containers and materials that could function on a spacecraft. So during Space Week and on the cusp of the 50th anniversary of NASA’s historic moon landing (July 20), let’s celebrate the ingenuity of packages that have trekked into space.

Over the years, hundreds of books and shows have documented and analyzed our forays into outer space. But little has been shared about the product packages that helped keep all the astronauts alive during their voyages from the earth to the moon and back.

Whether you’re a space enthusiast (like me) or not, Packaging Digest has two out-of-this-world treats for packaging professionals:

1. A slideshow of packages designed for space travel, courtesy of NASA and the Air Zoo museum in Portage, MI (near Kalamazoo). Of the packages on display at the Air Zoo, exhibits and collections manager April Bryan says, “One thing we learned through the research process is that companies like Del Monte, Crest and Stouffers made products for the astronauts. Crest definitely went into space. For Apollo 11, Stouffers helped feed the astronauts during their post-moon landing quarantine.” Click to start the slideshow.

2. Stories about packaging in space from a famous astronaut who is still alive today (scroll down).

As a side note…If creating packaging for space sounds like a dream job for you, check out this open position for a packaging engineer at SpaceX, the company founded by Tesla CEO Elon Musk with the goal of lowering the cost of space travel so mankind can colonize other planets, such as Mars.

Astronaut James (Jim) Lovell never landed on the moon, sadly. But he did travel there twice with the Apollo 8 and Apollo 13 missions, coming within about 60 nautical miles of earth’s lone satellite. During the 2014 Flexible Packaging Association fall meeting, Captain Lovell enthralled attendees (me included) with his stories of space, and the role packaging played in transporting and protecting products used on the spacecrafts.

In these select quotes from Lovell’s entertaining and inspiring luncheon speech, we learn that engineering packaging for waste management was one of the toughest challenges! Enjoy.

Innovation in packaging: “I did a little research on the flexible packaging industry and, I have to tell you, you’re a really exciting industry! When you think about it, everything comes in a package. From the stuff that’s in those large containers on a ship down to the aspirin that’s in a little bottle. The idea you have of innovation, of initiative, of imagination, is really prevalent in this particular industry.”

Vacuum packaging: “In NASA, we used a lot of packaging, of course. Everything was packaged at NASA, too. I’ll give you one example [from the early days of NASA, the Gemini and Apollo days]…we used a lot of freeze-dried food. Peas look like little flat things until you rehydrate them. We put them into a plastic package; one end of it had a little nozzle on it. But we vacuum packed these things so we could pack a lot in there [the spacecraft]. Then when you wanted to eat, you take the water gun and put it into the nozzle and it puts water back into the bag again. All the food would be rehydrated. And, for those days, it was pretty good. It kept us alive.”

Use a utensil or just squeeze: “If the food is thick enough, you can eat it with a spoon. Otherwise the water or anything has to be in a squeeze bag.” 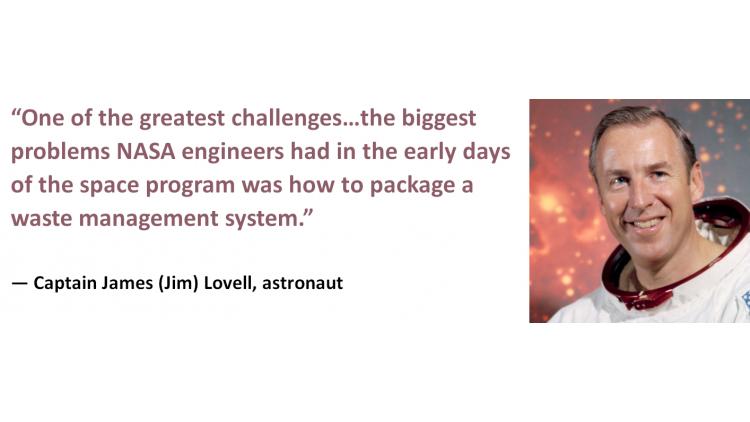 NASA’s waste management challenge: “…One of the greatest challenges, the biggest problems NASA engineers had, in the early days of the space program was how to package a waste management system. You have to remember, the early days of Mercury…the early flights were very short. We didn’t think about that at all. As a matter of fact, we told the astronaut before he got in to be sure he went to the bathroom because there were no facilities on board.

“But then, when the days got longer—Gemini’s was five, eight and the last one was 14 days—it dawned on the engineers that, yes, we have to figure out some way of waste management.

“Like all good engineers, they went after it tooth and nail. They decided first of all that they’d build a round commode and put a hose in the bottom to make a pressure differential so it would be replacing gravity, which was zero gravity.

“The design engineer gave this device, after he had it all figured out, to the test engineer. We had a zero G airplane and it would do parabolas. At the top of a parabola, if the pilots were very careful, they could get zero G as it went over the top before it started to come down again and they had to pull out. That zero G would last about 20 seconds, 25 seconds. There were no windows on the plane and all of a sudden you’re floating.

“So this test engineer took it up. They warned him ahead of time because they were getting this thing ready, ‘Have a lot of food here in the next couple days. Be ready.’ So this test engineer went up. Later on in the day he came back and threw the thing up on the desk. He says, ‘Look. Twenty seconds isn’t enough time for anything.’ (audience laughter)

“So one thing these engineers finally had to come up with has to do with your business—packaging. What they finally came up with was a plastic bag, about this round, that came down about this long. Half way down the plastic, there was a little plastic insert just big enough for one finger to get inside. Because of zero gravity again, you need to get something in there. Then at the side of the pouch, you had a piece of toilet paper and then you had a little disinfectant bag. Because, on a two-week mission, we couldn’t throw anything over the side and you didn’t want them to blow up.

“Let me set the scene…

“This is my Gemini 7 flight with Frank Borman. Two weeks. Nine days have gone by and Frank says, ‘Jim, this is it.’ I said, ‘Frank, you only have five more days left to go.’

“I won’t tell you how you do all the stuff. I’ll just let you know that…position in life is everything.

“That was some of the hardest problems NASA engineers had to do.”

Business lesson learned from the aborted Apollo 13 mission: “Always, always expect the unexpected. When everything is going right, profits are up, product is selling, always look down the road there to see if there’s something coming in—an impending crisis.”

“Because when I started to maneuver—and remember that I had spent hundreds of hours learning how to maneuver a lunar module in simulators—but when I wanted to pitch down, it went into some wild gyration. I wanted to go left; it went right. I wanted to go up; it went down. What’s going on here? Why can’t I control the spacecraft?

“Then it dawned on me…that I had attached to the lunar module the command service module—a 60-thousand-pound dead mass. I needed the command module with the heat shield to get back through the atmosphere for a safe landing. The lunar module had never been designed to have the command service module attached to it and be maneuvered. I literally had to learn all over again. I had to know, when I put an input in, what the output was going to be to get to the proper attitude.

“But, I’ll tell you, when you are in deep trouble, you’d be surprised how quickly you learn.”

Moral of the story of Apollo 13: “What’s the moral of this story? I shouldn’t be here. No oxygen. No electrical power. No propulsion system. Two hundred thousand miles out. Attached to another spacecraft whose sole job was to land on the moon in order to get back again. I’m here because of the dedication to that crew back in mission control, back in April 1970 in Houston. Because they used good leadership, not just at the top of the organization like Gene [Krantz], but leadership throughout the group. And they used teamwork. Because teamwork is the glue that puts many organizations together. And then initiative, motivation. Because they figured out how to keep us from getting poisoned with CO2. And, finally, they had a lot of perseverance. Because some of the things they thought of weren’t going to work.

“I’ll leave you with a little saying that maybe a lot of you have heard. But I think it’s kind of apropos: There are three types of people in this world. People that make things happen. People that watch things happen. And people who wondered what happened.

“Back in 1970, there were people who made things happen.”

You, the global audience of Packaging Digest, make packaging things happen all the time on this good earth that benefit the world, too. Thank you!