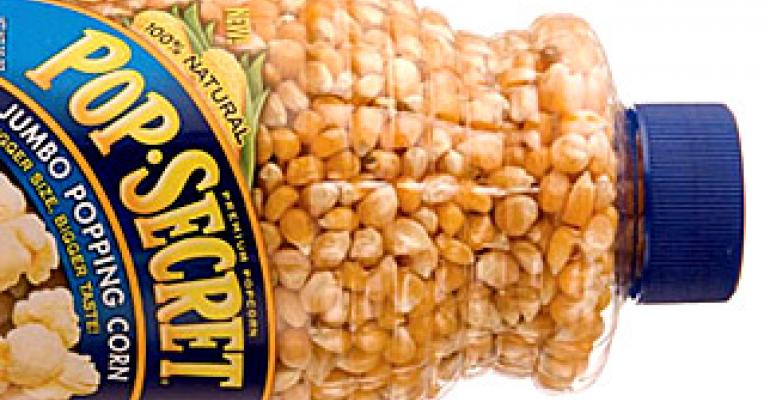 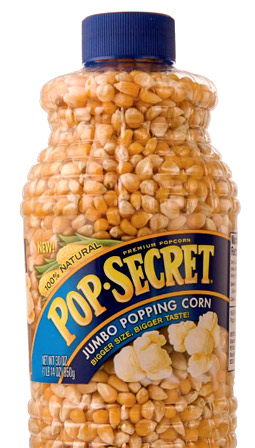 Pop Secret® Premium Popcorn was acquired by Diamond Foods Inc. in September 2008, and since that time Diamond has mounted strong efforts to lift this well-known brand image. These efforts were greatly aided by the launch of a new product: Premium Jumbo Popping Corn for stove-top popping or use with a popcorn popper.

The introduction of this new product called for an innovative packaging design to set this offering apart from the competition. Diamond Foods selected Silgan Plastics to assist in the design and manufacture of the jar.

New entry, new look
The popcorn category has been dominated by microwaveable popcorn for many years, and Pop Secret is a strong player in that segment. Plain popcorn kernels, on the other hand, has been a small part of the category, and relatively drab in terms of shelf presence, which is one reason that it occupies the bottom shelf in most grocery stores. That packaging ranges from stock square jugs to flexible bags, mixed in with a rare few custom bottles that by association find themselves also relegated to the obscure lower shelf.

“For this introduction, we wanted a package that would be both functional and attractive, consistent with the Pop Secret brand image,” says Jerry Johnson, Diamond Foods’ vp of Popcorn Operations. He also points out that, in this era of health-conscious consumers, the company wanted the package to reinforce subtly that this is a healthy, natural product.

“And, of course,” he adds, “we also wanted the package to have more consumer appeal than other popping corn products.” 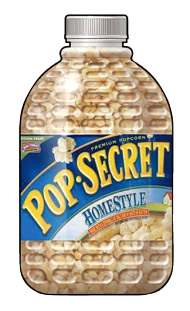 Designing the package
Johnson and other Diamond Foods personnel worked closely with the Silgan Plastics Creative Design Services Group to develop the design of the bottle. Early design guidelines provided by Diamond Foods combined elements that were intended to appeal to consumers during use, such as a narrowed neck grip area for convenient pouring, with shelf appeal benefits such as a tall, slim bottle configuration.

“Our market research had shown that consumers of popping corn found most existing containers to be unwieldy,” Johnson points out, “so we wanted our package to allow for easier handling and dispensing.”

He said that Diamond Foods also required this package to be designed such that it is visually appealing to today’s health conscious consumer.  This led to a taller container featuring a sleek taper that is intended to subtly remind consumers of an ear of corn. In addition, while designed to hold the same product volume, the bottle’s height serves to raise it above the other packages, and its smaller circumference allows for an increased packout on the shelf.

While emphasizing the objective of superior shelf appeal, the Diamond Foods design brief also specified the bottle’s capacity (30 oz.), material (polyethylene terephthalate - PET) and closure (a blue threaded cap). The final design touch called for engraving on the bottle to give consumers the “hand feel” of holding an ear of corn.

The experienced marketing professionals at Diamond Foods also knew that the feel of the package would be as powerful a sales motivator as eye appeal. The surface texture would tempt consumers to touch it, and experience has shown that once a consumer has picked up a packaged item it usually goes into the shopping cart.

Interactive communication
In response, Silgan designers came up with a number of 2-D concepts from which Diamond Foods could choose elements they liked, beginning the communication process that would lead to the final design. Throughout the process, Silgan Plastics designs and Diamond Foods reactions and suggestions went back and forth between the two companies in a “conversation” that lasted for several months in the summer of 2009, mostly via electronic exchanges.

Early 2-D concepts were followed by 3-D computer-generated designs that incorporated suggested changes. These images could be manipulated on the computer to allow Diamond Foods managers to view the designs from all angles.

Once the visual design was finalized, the Silgan Plastics team created FDM (Fused Deposition Modeling) prototypes of the new package. Silgan prepares such models for most projects to give their customers’ marketing and packaging specialists the ability to get a better sense of the final package by holding the model in their hands. Some also show models to consumer focus groups and prospective retailers, and to production partners to begin to prepare filling and case packing operations.

The final package design that resulted from this interactive communication incorporated the requested shoulder grip area and unique textured surface finish. The finished bottle surface is covered with raised “kernels” of corn above and below a smooth label area. This value-added feature was achieved by engraving the kernel pattern on the interior surface of the mold.

The final bottle design also further accentuated the corn motif by tapering the bottle slightly from the shoulder to the base, suggesting the shape of an ear of corn.

“No one of these elements by itself stands out as remarkable,” says Johnson, “but together they create a new look, new feel and new ergonomic functionality.” 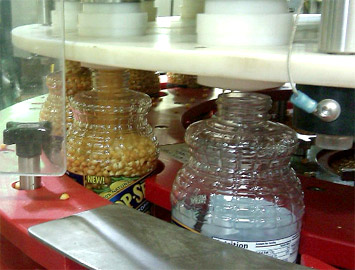 Design affects production
Production of custom bottles is usually affected by multiple factors. In this case, engraving the mold to produce the kernel pattern was time consuming, which was a concern for Diamond Foods’ aggressive schedule. Fortunately, Silgan was able to identify an existing preform that met the design criteria. This saved a considerable amount of time.

To let consumers see the jumbo popcorn in the bottle, the label is on transparent film label with the Pop Secret brand image graphics but including transparent areas through which the corn becomes part of the image. Because of the taper of the bottle, the label could not be a standard roll-fed wraparound label. It is printed, die-cut and applied adhesively by Signature Label to empty bottles before they are filled.

“The container geometry added complexity to labeling,” says Johnson, “so we elected to decorate the bottle prior to filling.”

Bottles are produced in the Silgan Plastics Triadelphia, West Virginia facility and sent to Signature for labeling. Labeled bottles are then sent to Great Lakes Packaging for filling, capping and distribution. Caps are also produced and lined by Silgan in Triadelphia and sent directly to Great Lakes, where they are applied on the filling line.

Product rollout begins
Filling of the new bottles began in December 2009, and distribution began in the first quarter of 2010. Diamond Foods sales/marketing plans call for full distribution of this product starting this Fall.
“Early sales in our launch markets have been encouraging,” says Jerry Johnson, “and we have had inquiries from retailers who have seen the product and requested that they be included in the distribution. Those results are exciting.”