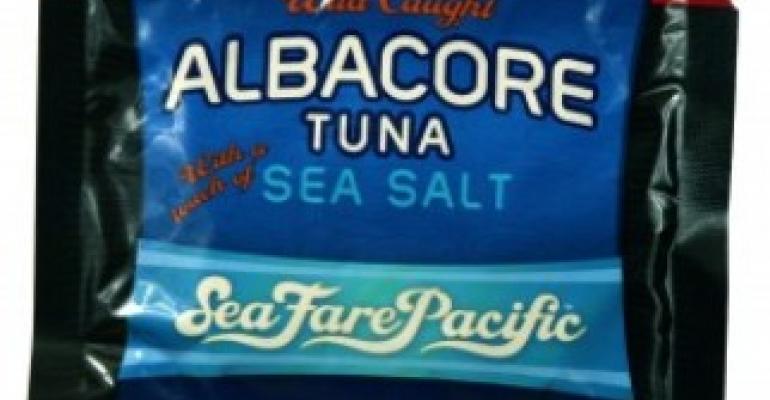 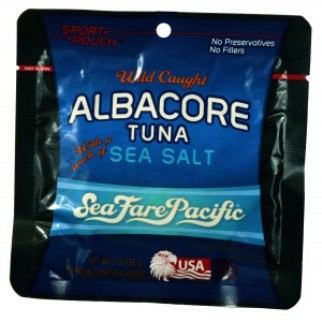 Mike Babcock and Oregon Seafoods, his 2-year-old Coos Bay seafood processing company, are small fry in the vast global seafood market. But Babcock is intent on carving out a niche for his fledgling company.

After 18 years as a mill owner in Goshen, Babcock jumped into a second career in the albacore tuna business -- a market dominated by three huge multinationals. It's a gutsy move, but Babcock, 50, says he's got several things on his side that will enable him to build a business selling wild-caught Pacific Coast albacore tuna, packaged in nylon and foil pouches, instead of cans. He has spent $1 million launching his seafood processing plant, which cans fish for other labels, and now packs four flavors of albacore in pouches under its own Sea Fare Pacific brand.

Industry veterans say it won't be easy for Sea Fare Pacific to establish a name for itself in a fiercely competitive market dominated by Bumble Bee, Chicken of the Sea and StarKist.

"It's always tough for any new company," says Michael Morrissey, director of the Food Innovation Center in Portland, which has worked with Babcock. The center, a joint venture of Oregon State University and the Oregon Department of Agriculture, offers fee-based services to help food processors develop and improve their products.

"Breaking into the food industry certainly has a number of challenges," says Morrissey. "There's a lot of product on the market that you have to compete with. Mike did a good job of recognizing what would be a good niche for him in terms of the flexible packaging. That was quite different from other products. That would differentiate his product from the others."

Babcock also seemed to know what market he was going after, both in food service and retail, says Morrissey.

"Understanding the market is really key to being successful," he says. "You need to do your homework. You need to work hard in getting some shelf space in a retail operation."

Babcock is hoping that food-service and home cooks will be willing to pay a premium for sustainably caught, dolphin-safe tuna, processed in the United States without fillers or preservatives, and in a package that he says takes less energy to make and ship than cans. Babcock created Oregon Seafoods in 2010 but just started selling albacore under the Sea Fare Pacific brand this summer. It is now available at more than 20 grocery and outdoor retailers across the state, including Capella Market, Jerry's Home Improvement, Market of Choice and Mazama Sporting Goods stores in the Eugene-Springfield area, Babcock says.

Babcock said he has also been talking to REI about carrrying his single-serving 3-ounce pouches of Sea Fare Pacific's smoked albacore and smoked Alaskan salmon at its top-selling 24 stores. If that works out and the product appeals to REI shoppers, the outdoor retailer could expand to additional stores, Babcock says.

Babcock has plenty of experience in business, but not in the fishing industry. He started Northwest Fir Products in 1993, which evolved into Goshen Forest Products. He sold his remaining shares in that company last year for an undisclosed sum.

The top three international tuna companies all pack albacore tuna in a pouch, but generally the fish packed by these and other common grocery store brands are from larger tuna caught in the south Pacific that studies show have higher mercury levels than the younger, smaller albacore caught off the West Coast, Babcock says. These companies also cook the tuna twice, once to make it easier for workers to remove meat from the bones and again in the can after water and flavorings, typically chicken or vegetable broth, are added. Sea Fare Pacific hand filets its tuna at ice-cold temperatures, and cooks it just once, in the pouch in its own juices. That process retains more of the heart-healthy Omega 3 fatty acids than the twice-cooked fish, Babcock says.

Numerous boutique canneries in Oregon offer a product similar to Babcock's, just in a different package, including Chuck's Seafood in Charleston, Skipanon Brand Seafood in Warrenton, Sportsmen's Cannery in Winchester Bay, and Sweet Creek Foods in Elmira, which has packed its albacore in glass jars since 2005.

"The challenge is getting your name out there and getting people to taste the quality," says Judy Fuller, who owns Sweet Creek Foods with her husband, Paul.

Once people taste the difference, however, many find there's no going back, she said.

"I get phone calls and e-mails all the time, 'You've ruined me! I can't eat the cheap stuff anymore!' " Fuller says.

Babcock predicts that Sea Fare Pacific will appeal to individuals as well as food-service accounts, and that the bulk of sales will come from restaurants and cafeterias, whose cooks like the ease of ripping open a pouch and the quality and consistency of fish inside.

Tuna packed in a pouch retains heat for a controlled amount of time compared to tuna packed in a 4-pound can that continues cooking, and drying out, as the can cools down, he says.

Hikers, campers, cyclists, fishermen and women and others also like the convenience of a lightweight pouch that they can shove in their backpack and go, Babcock said.

"There isn't quite the price disparity when you consider how much fish you're getting," Babcock says. A 5-ounce can of fish packed in water typically only has 3 1/2 ounces of meat, he said, a claim backed up by testers at several food and fitness websites.

In addition to going up against the industry's big guys, Babcock also will have to deal with unpredictable market forces, such as annual fluctuations in the catch and the price.

"It's the romance and hardship in any kind of wild-caught operation," says Morrissey, of the Food Innovation Center. "Albacore prices were at their all-time highs this year, which is good for the fisherman but will present certain challenges to people like Mike," who has to buy the product, process it, and sell it at a price that consumers will pay, Morrissey says.

Babcock buys his tuna from fishermen that troll off the Washington, Oregon and California coasts.

Last year, the price was $1.91 a pound, nearly double the average price over the past decade.

Last year "the market for albacore exploded," says Aaron Chappell, of the Oregon Department of Fish & Wildlife. The total revenue last year for Oregon albacore was $18.46 million, $6 million more than any previous year, he says. "That's a huge increase in a single year."

A combination of factors pushed up prices, including the earthquake and tsunami in Japan, which destroyed the world's largest cold-storage facility in Sendai, and disabled much of Japan's fishing fleet, he says.

Worldwide catches of albacore were down last year, especially in the Indian Ocean and the Mediterranean, he says. Plus the weak U.S. dollar made exports a relative bargain for buyers in Asia and Europe, Chappell says.

Babcock says he's aware of the price trends and that many in the industry think they are topping out. His plan is to grow at a pace his sales and cash flow will support. His fish processing facility, Oregon Seafoods, has seven employees who pack fish in cans for other labels and pack Sea Fare Pacific brand products in pouches. So far, the canning line has been the major source of Oregon Seafoods revenue, but "we expect that to change quickly," Babcock says. "In 2012, Sea Fare Pacific revenues will take over."