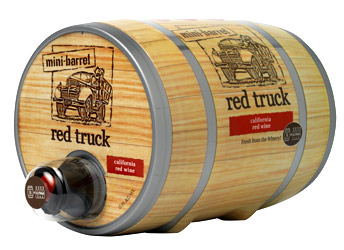 “It’s time consumers had the option of a premium quality wine in a format larger than 750ml,” said Carol Reber, Vice President of Marketing at 585 Wine Partners which owns Red Truck Wines. “For anyone who’s ever visited a winery or wished they could, the Mini-Barrel by Red Truck makes the experience come alive in their own home.”

“The Mini-Barrel by Red Truck represents a real breakthrough in both concept and execution,” said Dex McCreary, Senior Merchandise Director, Wine and Spirits, Sam’s Club. “It is just the kind of quality and value proposition we like to offer our members and it brings an innovative and authentic new design to wine enthusiasts.” 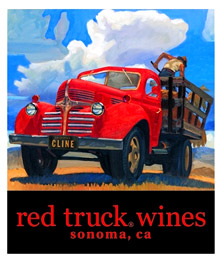 Mini-Barrel by Red Truck is being introduced at a time when the consumer is looking to make smart, value-oriented wine purchases. The 3L category, which has been growing significantly in recent months according to data from The Nielsen Company, is appealing not only because the format provides tremendous value but because wines packaged in this way, unlike their 750ml counterparts, stay fresh for up to 40 days. Furthermore, large format packages are widely considered to be more environmentally friendly than glass bottles due to their comparative lighter weight and lower carbon footprint.

“The carbon footprint reduction when you go from glass to this type of packaging is staggering, but until now, consumers have had very few choices in the 3L format,” said Dave Mollison, Director of Production for 585 Wine Partners. “Now they can make a ‘green,’ value-oriented wine purchase without giving up the quality they’ve become accustomed to in the bottle. Plus, the Mini-Barrel is so appealing – it’s a wine they’ll be proud to display on their counter, at parties, barbecues and picnics.”

The Mini-Barrel by Red Truck features an easy pour spout with tamper-proof protection that requires no tearing or “fishing” to get to it. A patent-pending Opti-Flow incline built into the barrel ensures that all wine gets to the spout, so there’s no tipping to get the last glass. The Mini-Barrel will be available nationally later in 2009.