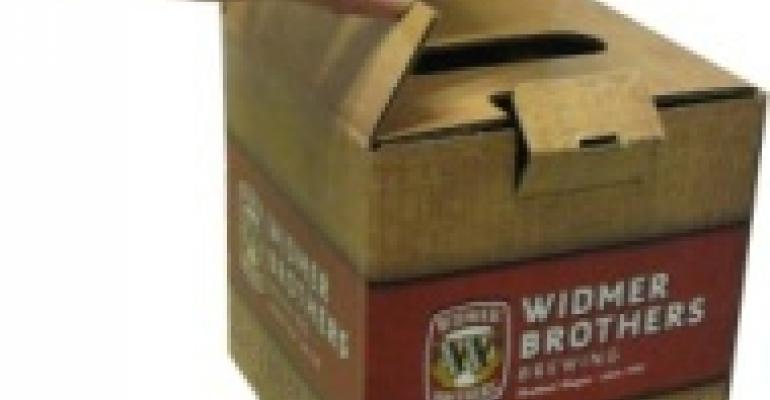 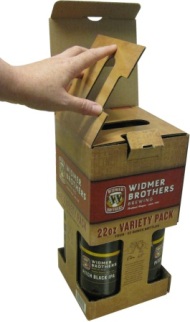 Like many other American craft breweries, Widmer Brothers Brewing-a Portland, OR-based outfit that's been in operation since 1984-proudly brews up a variety of carefully crafted, foamy libations. When it set to work on creating sampler packaging, the company needed to come up with a carton up to the formidable tasks of containing four 22-oz glass bottles of brew, offering convenience to thirsty customers and delivering show-off shelf appeal.

With the help of packaging partner xpedx, Widmer Brothers Brewing (a division of Craft Brew Alliance Inc. since 2009) created a unique folding carton sturdy enough to support the weight of all that glass and liquid, in a configuration that's easy for customers to grab and carry. Further, the carton features cut-out corners, a design feature that shows off the attractive labels and bottles, and gives consumers a clear idea of what craft beers they're taking home.

"Allowing customers to see the bottles adds great value," says Aaron Burget, assistant brand manager at Widmer Brothers Brewing. "Our main goal was to create a package that reveals the bottle labels inside, so that we didn't have to change the graphics on the box with each new offering."

Another benefit: because the carton has windows but isn't printed for any specific Widmer Brothers Brewing varieties, the brewer can quickly switch out the beer varieties inside according to its needs, showing off their newest wares, seasonal brews or other product mixes. 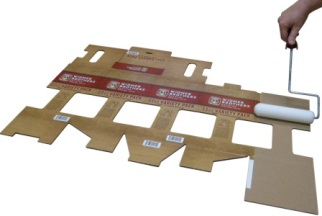 Coming up with such a carton presented a number of challenges-the configuration is unique, so it required a unique approach.

"As we started to work on the design, we realized we couldn't use standard box-making equipment in a boxmaking plant," says Gaby Roberts, custom services specialist with xpedx. "It's really difficult to join a box securely if you don't have a complete corner panel."

Staffers at Widmer Brothers and Craft Brew Alliance, xpedx and xpedx's parent company International Paper toiled away at the design, working to create a balance between their functionality goals, structural integrity and attractive design. According to Kyle Jennings, senior director of supply chain for Craft Brew Alliance, there was a great deal of trial and error getting the carton just right.

"We struggled with the size of the opening-we wanted the carton on the corner to form a visual standpoint, and really give us a striking package," he says. "The thing about it was, we had to have it where the space was just enough to show the label and the code date, but it couldn't take away too much corrugated or it would take away from the packaging integrity."

Other structural challenges included deciding how the custom carton would be opened by consumers, and where the carrying handle would be positioned. According to Jennings, an early mock-up had the carton opening up on the side, but such a configuration was prone to letting the bottles tumble out-definitely not an option. Another trial package consisted of a top-opening carton with a convex handle; however, Jennings says that design was unworkable, because it proved difficult to stack, which would have made palletizing the assembled sampler packs problematic at best. Much more effective was a top-opening carton with a cut-out handle in the top panel. 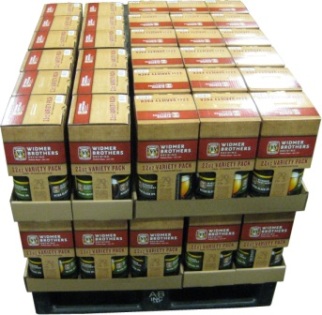 The finished result is printed by International Paper at its Beaverton, OR, facility. The carton is a corrugated box with inside dimensions of approximately 6x6x11 in., die-cut one-piece corrugated folder, 32ECT B flute. The flats are produced by International Paper; the company produces the overlying label (printed lithographically in a 4-color process), which is then laminated to the corrugated sheet on an Automatan laminator. The litho-laminated sheets are die-cut into the desired shape on a Bobst die cutter.

The finished boxes are delivered to xpedx for converting. There, production personnel apply glue to the sheet to create the outer box walls, tuck the snap-lock bottom in and insert a partition. The already filled and labeled beer bottles intended for placing in sampler packs are shipped from the brewery approximately 14 miles away to xpedx's facility. There, staff provides the kitting and fulfillment services.

The brewing company also is pleased that the new Widmer Brothers Brewing sampler packaging offers sustainability benefits-the new cut-out sampler carton increases pallet capacity 40 percent, which helps reduce shipping costs. Further, because the all-purpose carton doesn't have to be customized for each individual sampler pack, it helps save costs associated with customization and makes it quicker and easier for Widmer Brothers to get a new sampler pack combo out on the shelves.

"The bottom line is, we want to get our beer out in the market as fast and as fresh as possible," says Jennings. "This lets us do that, and shows off the product well."

Widmer Brothers Brewing has grown leaps and bounds, from its kitchen-sink origins in the mid-1980s, to its status today as a major player on the national craft-brewing stage. The company is part of the Craft Brewers Alliance, which rolls out an estimated 600,000 barrels each year to make it the seventh-largest brewer in the U.S. With that many kegs and bottles going out the door, it is vital that the brewery be able to keep tabs of its entire operation, from barley to bottle.

"Our business has been growing in complexity-we have had to handle a lot more data and have to make sense of it all to manage our operations," says Mike Domenighini, quality assurance manager for Craft Brewers Alliance.

The QIS enables staff to monitor systems across the operation, capture critical beer-brewing and packaging information, and break it down for analysis and reporting. Among the improvements the QIS has helped implement: boosting brewhouse efficiency and streamlining the performance of the bottle fill line.

"Now we have timely access to all of our data," says Domenighini. "And with the analytics, we know exactly where we are and can take actions to make the best beer."
.