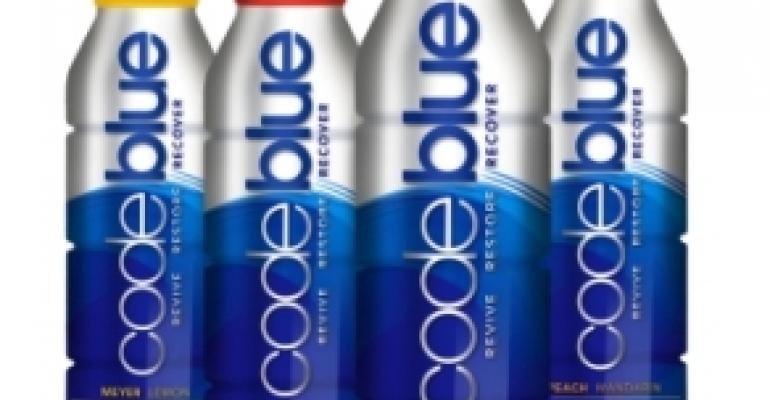 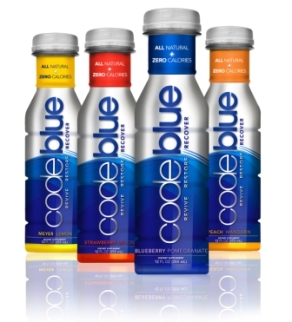 The beverage shelves of retail stores across the country are getting more and more crowded-especially when it comes to "performance" beverages. Brightly colored bottles of sports drinks stand next to vitamin- and herb-enhanced waters, which are above tall, bold cans containing energy concoctions. A new entry into the beverage market-even one with a unique formulation combining the properties of several performance libations-needs a well-designed package to stand out.

Code Blue is one such beverage. The "crossfunctional super drink" blends the characteristics of a conventional performance beverage, healthful properties of an enhanced water and restorative benefits of an herbal drink. However, until the innovative product was migrated from a metal can to a PET bottle with a shrink-sleeve label, the brand's message was missed, and the product got lost in the crowd.

On the starting line

The Code Blue brand has its origins in the founders' common passion for athletic pursuits. Michael Sachs first met brothers Jeff and Steven Frumin while the trio attended Boston University and shared a common passion for working out and playing sports. A decade later, the three friends remained close, and active, but they realized the sports drinks presented to help vital people like them recover after a game or workout didn't cut it. Most sports-recovery beverages, they found, were loaded with undesirables such as preservatives, sugar and empty calories. Missing from retail shelves were beverages that provided the touted recovery benefits of a sports drink, health benefits of an enhanced water and the healing properties of natural herbs.

Over the course of four years, the team partnered with a group of researchers to come up with a beverage formula that fit the bill. The group tested and tasted hundreds of different formulations, eventually settling upon a recipe that blended all-natural ingredients in a zero-calorie formulation that helped athletes revive, replenish and recover after a sweat session. They enlisted the marketing prowess of Eric Schnell, another Boston University alum, to bring to market Code Blue (named after the hospital code alerting staff to patients in need of revival). The beverage originally was placed in a tall, sleek 12-ounce can; however, the brand team soon discovered that the package design and construction confused shoppers and caused it to get lost on the shelf.

"The can was being perceived as an energy drink, and we needed a package that would reflect the healthy, natural benefits of our brand," says Sachs. "The shrink sleeve allowed us to use a PET bottle but still maintain the sleek, brilliant look of the can."

In early 2011, the team set to work on redesigning Code Blue's look, evolving the packaging to make it more readily identifiable to both existing customers and shelf shoppers. Schnell, with a background in consumer beverage marketing, previously had worked with the staff of Overnight Labels Inc. while serving as president of Steaz, a company specializing in tea drinks. The Code Blue team approached the Overnight Labels staff to come up with a solution and put the brand and message on track.

"Since this was a revamp of their old product, they needed some hand-holding," says Overnight Labels president Don Earl. "The goal I had in the redesign was to make it look as good as possible. Also, we wanted a design that was transferable to any other flavors they come up with."

The redesign that the team settled upon is a PET bottle with a high-shrink PVC sleeve label, printed flexo. The bottle itself, produced by Amcor, is tall, with a tapered neck topped off by a screw-top closure. The striking label design features the brand's bright blue logo over a background of silver, with accent colors evoking the various flavors (including Meyer lemon, strawberry melon, blueberry pomegranate and peach mandarin). The beverage is bottled at Liquid Manufacturing LLC's plant in Brighton, MI.

The thrill of victory

The revamped Code Blue bottle made its grand entrance at the Natural Products Expo East—an event showcasing healthful, natural, organic items geared toward both general retail and specialty stores— in Baltimore in September 2011. Shortly thereafter, the new bottle was launched on retail shelves. According to Sachs, the company's thoughtful redesign has resonated with consumers and led to a healthy boost in sales.

"Response was overwhelming," says Sachs. "We sold out the first production run within the first month, due to a much greater demand than we initially forecasted."

Sachs adds that the company is examining the possibility of expanding the Code Blue brand, thanks to the increased sales after the package redesign.