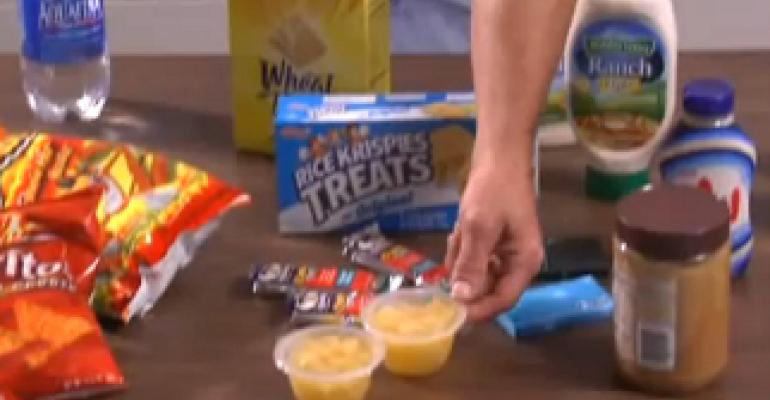 According to a new consumer study, technology is permanently changing the way humans interact with a variety of products and packaging, forcing consumer product companies to adapt—or die.

"While multi-tasking isn't a new activity—we eat while we drive, we open doors while holding a child's hand, we make dinner and talk on the phone—this dramatic surge in smartphone usage is driving a permanent change in human behavior that designers and manufacturers simply can't ignore," says consumer strategist Kelley Styring, a Procter & Gamble and Frito-Lay market research veteran whose firm InsightFarm consults with Fortune 100 companies. Her One Handed World research study was inspired by the proliferation of smartphones.

Styring investigated how an extreme user group—arm amputees—interacted with, and were challenged by, nearly 250 everyday products and their packaging across 18 different categories. She then surveyed two-handed consumers, exploring how they spent their days and how they fared with the same items.

She found that two-handed consumers actually spend the majority of their waking hours, 40 percent of their day, with one hand occupied. As a result, they attempt to interact with a variety of other products and packages using a single hand or finger.

"People are on the go and trying to get more done in less time. They desperately need items designed to accommodate that lifestyle. Yet precious little that we interact with on a daily basis has been designed to operate with only one hand," explains Styring. "Basically, we are all living in a one-handed world, and who better to teach us than those who live elegantly and efficiently with one hand—arm amputees."

"Arm amputees provide us with a preview of this shift in overall consumer behavior, and that's what makes this study so exciting," says Styring, who previously garnered national attention for her studies of objects women carry in their purses and of items drivers store in their cars. "Most market research captures the consumer's past. With this study, smart marketers and designers have the very rare opportunity to not only understand where the consumer is headed in the future, but also get there first with new designs to meet their needs."

Overall, one-quarter of amputee respondents found everyday items difficult to operate with one hand, with the degree of difficulty increasing with the complexity of the task. However, Styring was surprised at the number of items two-handed consumers reported difficulty opening or using, even when both hands were fully available. In some cases, two-handed respondents reported more difficulty than the amputees.

Of the top 10 categories identified as difficult, nine of them were identical between one-handed and two-handed people. According to Styring, that means the issue isn't with the consumer, it's with the item they are trying to open or use. 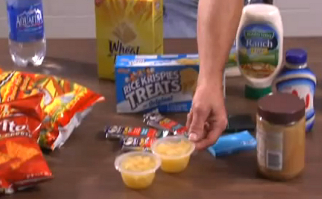 "Packaging in particular is ripe with opportunities to make simply opening items easier and more predictable," says Styring. "Convenience is the killer app. My study has found that one-handed convenience creates delight and engenders loyalty in consumers. A product that is easy to use with a single available hand creates a tremendous competitive advantage for itself in the marketplace and can boost profits, since consumers will pay a premium for convenience."

So, what can packaging designers do to adapt to this changing environment?

"It's time for packaging to evolve, too," says Styring. "This isn't about high-tech solutions for a small portion of the population. This is about making items people use every day—juice pouches, ketchup packets, cereal boxes and yogurt cups—easier for everyone to use."

In addition to providing data on individual packages within specific categories, the "One Handed World" syndicated study identifies 17 innovation platforms designers can use to innovate better and easier-to-open packages for everyone.

For example, the "One Handed Stabilization and Manipulation" platform identifies products that require one hand to do two different jobs: stabilize an item AND manipulate it at the same time, such as opening a jar. In the one-handed world, a product like that is a failure for the consumer.

Another platform is "Toothiness." Despite the objections of dentists, many consumers use their teeth as a sort of "third hand" and, when employed safely, can be a beneficial tool.

"It's all about facilitating usage," concludes Styring. "People are changing, and companies that look to the future and change their designs can win big."

For more information, go to www.theonehandedworld.blogspot.com/.

About the One Handed World Study

Inspired by the proliferation of smartphones, market researcher and consumer strategist Kelley Styring conducted in-depth qualitative interviews and a quantitative panel with arm amputees, as well as a survey of two-handed consumers.

She discovered increasing use of handheld technology has changed the way people interact with a wide range of products. Her study also identifies ways smart marketers and designers can adapt their products and packaging in order to win big in the marketplace with consumers.

Why study arm amputees?
Arm amputees live elegantly and efficiently with only one hand, providing a rare opportunity to understand future consumer behavior.

When one hand is occupied, how much time is spent with the other hand:
Free: 53%
Completing tasks: 47%

ONE IN FOUR amputee study participants found everyday products difficult to use with one hand.

ONE IN FIVE two-handed study participants reported it was difficult to use everyday products.

Of the Top Ten categories identified as most difficult, nine of them were identical between one-handed and two-handed people. According to Styring, that means the issue isn't with the consumer, it's with the item they are trying to open or use. 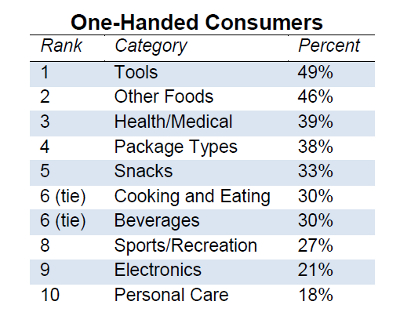 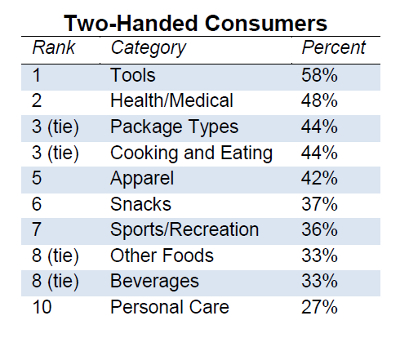 So, what's a product or package designer to do?
While "Hands Free" remains the gold standard for ease of use, that's not always possible. Styring has developed 17 different innovation platforms designers can use to create or improve their products or packaging. For example:

• One Handed Stabilization and Manipulation
Identifies products that require one hand to do two different jobs: stabilize an item and manipulate it at the same time, such as opening a jar. Can the palm be used to stabilize an item while the fingers of the same hand open it?

• Toothiness
Much to dentists' dismay, the "third hand" is often the teeth. While it may be unsafe and socially unacceptable, teeth are being used to compensate for packages that are difficult to open. Designing packages to be opened safely and hygienically with the teeth would be paradigm-breaking, rather than incisor-breaking, for consumers.

• Packages with Predictable Opening Results
It doesn't matter how many hands you have available to use if you can't count on a particular package to open in exactly the same way twice. Consistency counts with, and creates delight in, consumers.