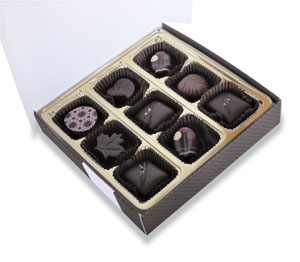 Cadeaux Chocolates, a woman-owned and operated, Seattle-based boutique confectioner, has redesigned its chocolate boxes—moving from an acetate box with a pressure-sensitive label to a more eco-friendly paperboard carton with a hand-crafted versus homemade look.

The eco-friendly attributes of the packaging are an extension of the strong values espoused by Shimada, who has used her chocolate business to build relationships with other female entrepreneurs, who also are mothers, and to inspire her own son through her example.

In addition to completing the Maître Chocolatier Program in France from Ecole Chocolat, Shimada has trained at the Culinary Institute in America in Hyde Park, NY; the Notter School of Pastry Arts in Orlando, FL; the Callebaut Academy in St. Hyacinthe, QC; and L'École Culinaire du Grand Chocolat in Tain L'Hermitage, France. The chocolates she creates are rich, beautiful, high-end confections, but the original candy packaging did not properly address this market she was trying to reach.

Adding to this branding challenge was a packed schedule since Shimada not only operates Cadeaux Chocolates, but she also is a psychiatrist and mom to a 10-year-old son. But like the three princes of Serendip, Shimada finds assistance for her problems by keen observation in all her surroundings.

One of the school mothers whom Shimada had befriended at her son's school also is an entrepreneur. When Shimada noted that one of the female entrepreneurs had a beautifully designed logo, she was quick to inquire about the designer. With the aim of creating a new logo for Cadeaux Chocolates, Shimada contacted Graphiti Associates.

“What I quickly realized was that just having a logo, until it was really integrated with the packaging, wasn't going to be enough to give her a good solution,” says Pensell, “so I presented the logo in the form of packaging: It was just a simple wrap for that acetate box.”

The wrap was offset-printed by Evolution Press on 70-lb Neenah Classic Crest permanent pressure-sensitive stock, and it perfectly reflected Shimada's personal style preference for clean, modern design and her appreciation for the Japanese aesthetic, while speaking to the appropriate high-end market for her candies.

Pleased with the redesign of the label for the acetate box, Shimada came to Pensell and Hill when she wanted to launch a new nine-chocolate offering.

Hill had just learned learned about Mohawk Renewal, a carbon-neutral and processed carbon-free paperboard manufactured with wind power, from his paper supplier West Coast Paper. He suggested Renewal vellum as a tactile branding element hinting at the lush, luxurious texture of the chocolates.

To visually extend this branding message of luxury, Pensell created a package design that used generous swatches of three Pantone spot colors, inspired by Shimada's chocolates and the golden color of a gingko leaf (a popular tree in Japan) in autumn.

While a vellum finish can impart a lush feel to a sheet, the texture, historically, has been associated with several printing problems, including ink lay-down and post-press performance.

Pensell helped alleviate one of the potential problems by designing the cartons with spot versus process colors, thus eliminating any potential problems with dot reproduction. The design did incorporate large areas of heavy ink coverage, though, and this was a concern to Evolution Press staffers as they set up their Heidelberg GTO 52-4 for the run.

The Renewal board accepted the linseed oil ink beautifully, says Hill, with even coverage throughout the large areas of dark brown ink and without offsetting onto the neighboring print areas. While he was pleased with the printed results, he still was concerned about how the paper would perform post-press. “We were concerned that once the sheet was scored and folded up, it would crack,” Hill recalls. A crack through one of the heavy ink coverage areas would result in a high-contrast line from the 91-bright white stock showing through the dark brown imaged area.

To finish the sheet, Evolution Press used a steel-rule die on a Heidelberg cylinder to score and die-cut. The single-ply constructed paperboard finished cleanly, preserving the integrity of the heavy ink coverage areas during scoring and when manually formed by Shimada during the packout process.

To complete a box of chocolates, Shimada inserts into the paperboard carton a sheet of richly colored wax paper, a candy insert tray and candy cups, which are sourced from The Revere Group.

While Shimada finds both her work as psychiatrist and a chocolatier rewarding, she says the chocolate work has helped forge a special connection with her son. Shimada explains: “When people ask my son what his mother does, he tells them that I'm a chocolatier. He completely forgets that I am a physician because he really bonds with that and he loves to give me feedback on my chocolate. To me, it's been very important in my mothering to emphasize to my son how he can follow his inspirations and his creativity.” For example, her son has an interest in photography and many of the photographs accompanying this article were taken by him.

Her son isn't the only fan of Shimada's work. Since starting the company in 2007, Shimada has been wowing food experts. Her milk chocolate ganache with vanilla bean truffle has won top placement in Seattle Metropolitan Magazine's ranking of local chocolates, and Seattle magazine named her gold-flecked bittersweet chocolate its 2008 Most Valuable Truffle.

As her business grows, Shimada is looking to upgrade her packout processes. She hopes that automating some of the chocolate packing processes will allow her to continue to hand-craft her chocolates as her business volume grows. At time of publication, she was investigating automation options for wrapping her chocolate bars.