Time for wine? Roll out the...bag-in-a-barrel? 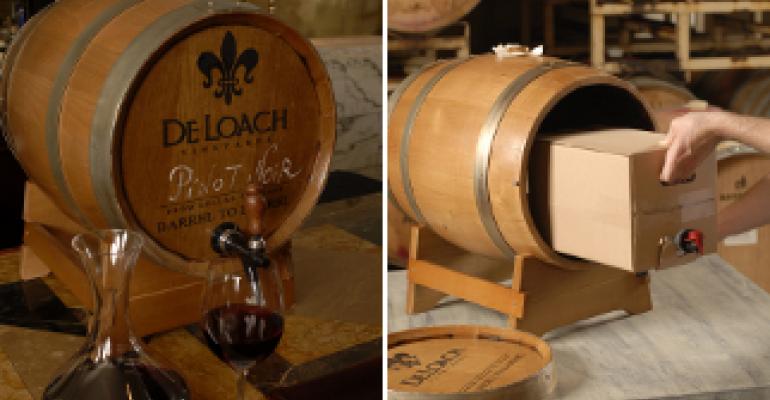 Selling wine by the glass is hot, but having half-empty bottles left over is not, something that has prompted restaurants and bars to explore new delivery systems from sophisticated preservation devices to kegs that keep wine on tap.

Selling wine by the glass is hot, but having half-empty bottles left over is not, something that has prompted restaurants and bars to explore new delivery systems from sophisticated preservation devices to kegs that keep wine on tap.

One of the latest variations on the theme has a back-to-the-future aspect: The wine is packaged in plastic bags similar to those used in boxed wines, but in this case the bag is housed in an elegant wooden barrel. 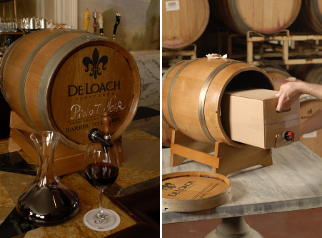 "This is the reinterpretation of history," says Jean-Charles Boisset, president of Boisset Family Estates. "We wanted to create something very unique for restaurants and hotels and eventually for someone at home."

Boisset Family Estates runs DeLoach Vineyards in the Russian River Valley region of Sonoma County, which has been selling what they call the barrel-to-barrel concept for more than a year, and recently launched the program at the company's St. Helena-based Raymond Vineyards.

As with boxed wines, the bag-in-barrel approach comes with the advantage of not having to ship and recycle glass bottles. And the wine stays fresh longer. According to Boisset, the unfilled 10-liter bag weighs about 68 grams, 99 percent less than a nine-liter case of empty glass bottles.

So far, about 800 of the 10-liter barrels have been shipped to restaurants and bars. DeLoach also recently introduced a 3-liter version for home use. The Raymond wine, a cabernet sauvignon, is available only in the 10-liter size for now.

At Chicago-based Wildfire Wine & Spirits, a small chain of steak-and-seafood restaurants, director Brad Wermager says he was drawn to the concept because it was different and "we liked the idea that it was good for the environment."

Wildfire has 30 wines available by the glass and Wermager has considered buying wine in kegs, which is another way to save on bottle waste. He likes the fact that the barrel is something that can be put on display. "It's a good conversation piece," he says.

Bag-in-box wines have come a long way since the days when they were mostly the punch line to jokes. Many have won high praise and they're becoming a more common sight on store shelves.

Still, Raymond winemaker Stephanie Putnam admits she had some qualms about the new packaging.

"Of course I did," she says with a laugh. "But I think we have really worked hard on trying to keep the wine as fresh as possible. We're bottling the wine every three months, that way we're really keeping it fresh and vibrant for the consumer."

At the Captain's Tavern in Miami, Bill Bowers who owns the restaurant with wife Audrey, put the DeLoach barrel in about four months ago and "we've had good luck with it," he says.

Leslie Sbrocco, wine author and founder of ThirstyGirl.com, sees the bag-in-barrel program as part of a general evolution of wine packaging as the industry and consumers have gotten used to more than the traditional bottle and cork.

In addition to wine-on-tap systems for commercial and at-home settings, boxed wine companies have upgraded the design of packaging, with a few companies opting for reusable wooden boxes.