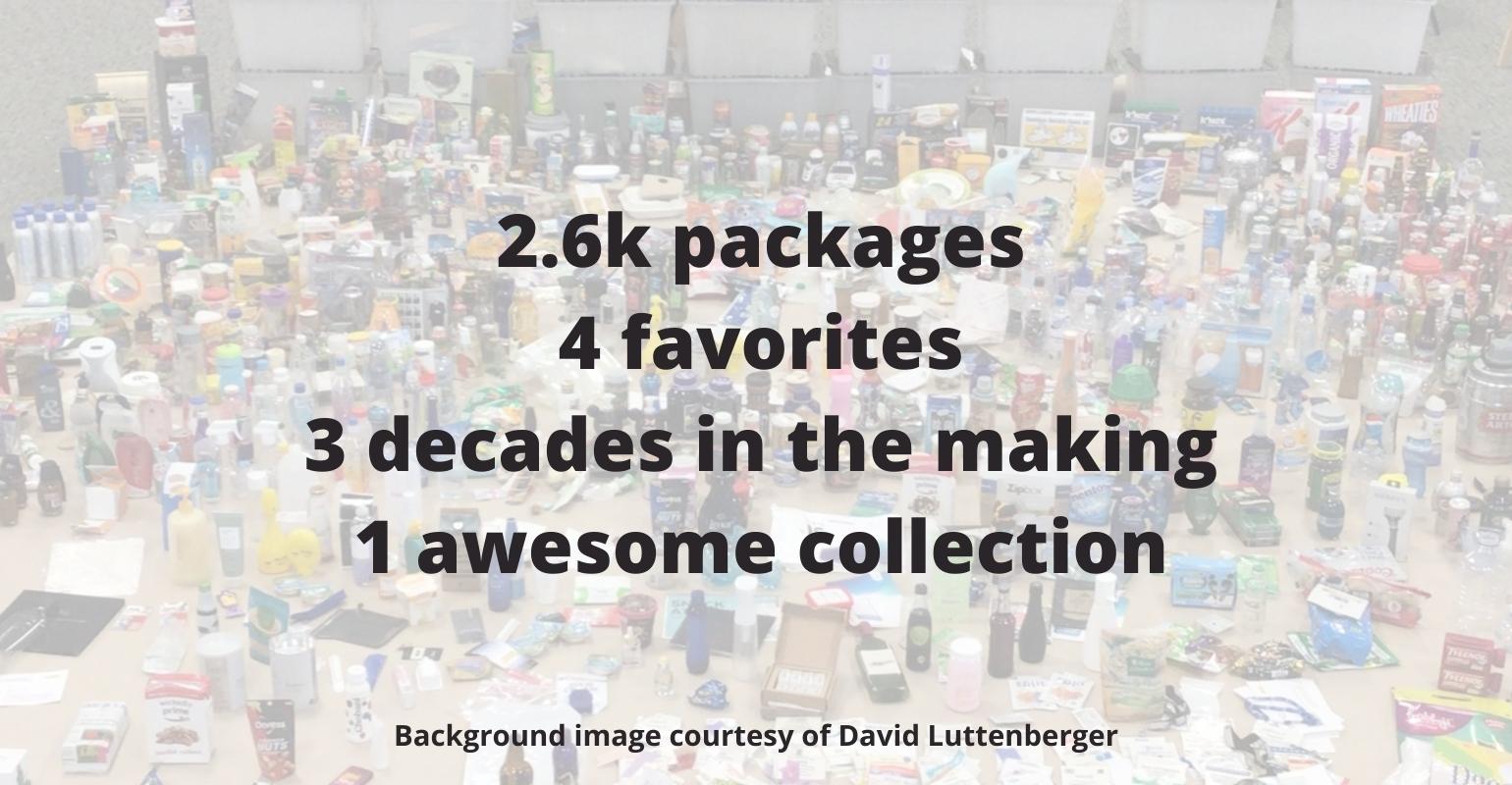 This packaging geek hoarded more than 2,600 innovative packages over the last 30 years, including his favorites. Then came the purge …

It was a bittersweet goodbye. Last month, @PackagingGeek David Luttenberger finally acted on his wife’s persistent request: He sorted, photographed, and then parted with his precious collection of 2,640 packages. He accumulated these samples over the last three decades, and stored them in his garage, home office, and the master bedroom walk-in closet.

“I began my collection — addiction — in 1989 with a sample pack of wooden hotdogs, a PET [polyethylene terephthalate] preform, and a lump of melted aluminum cans,” Luttenberger recalls.

As a fellow purveyor of packaging awesomeness, I know how painful it had to have been for Luttenberger to part with his treasures. I’ve cleaned out my stash periodically over the years and am down to just one file-box-size box (overflowing a bit). I hide it from my husband so he doesn’t accidentally kick it to the curb when I’m not looking. He knows how attached I am to my pretties, but he says he’d be doing me a favor by curtailing my obsession (not!).

My favorite (still) is the Kiss & Tell perfume spray bottle I first wrote about in 1999 and then again in 2014 for my 30-year anniversary as a packaging journalist. The bottle-in-bottle design holds both eau de toilette for daytime wear and a heavier perfume for romantic evenings, with unique reservoir sprayers at either end to dispense the two similar but distinct fragrances. So inventive!

I wondered, out of more than two thousand packages he had saved over the decades, which one did Luttenberger like the best and why?

1. “My all-time favorite package has to be the original version of the ColaLife AidPod. The vision of Simon Berry to see that underserved consumers in sub-Sahara Africa could get a Coca-Cola, but not life-saving oral rehydration salts (ORS). Children were dying at an alarming rate due to diarrhea. The idea of developing a package that could be distributed by bicycle in the void areas between Coke bottles in crates to deliver the ORS, repurposed to package to solar-sanitize water, measure the medicine, and be used as a drinking vessel, was nothing short of genius.” 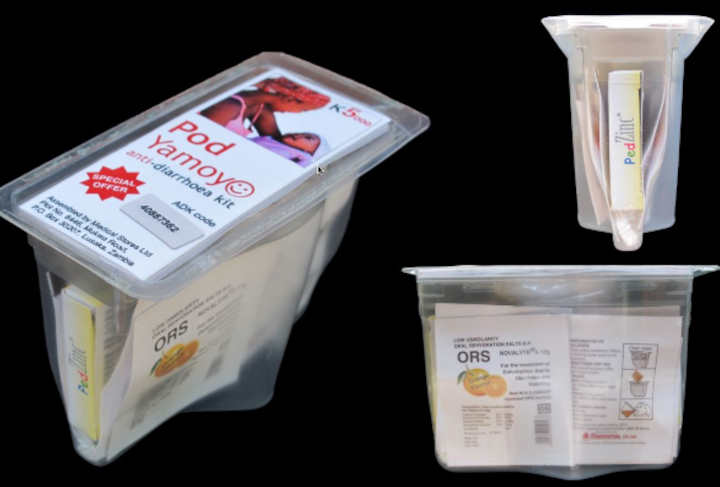 The ColaLife AidPod won the Diamond Award in the prestigious DuPont Awards for Packaging Innovation competition in 2013, among other accolades.

But Luttenberger can’t leave it at just one favorite. He has three more to gush about.

2. “My second favorite package of all time is Garcon Wines’ flat wine bottle and corrugated mailing master carton. Such a mastery of form and function; engineering a way to safely distribute wine through the postal system, and in a primary and secondary package that exhibited so many elements of environmental responsibility,” he enthuses. “It is so sophisticated yet simple. The messaging on the interior of the master carton shares with consumers how to enjoy the wine, but more importantly, how to recycle both the bottle and the carton.” 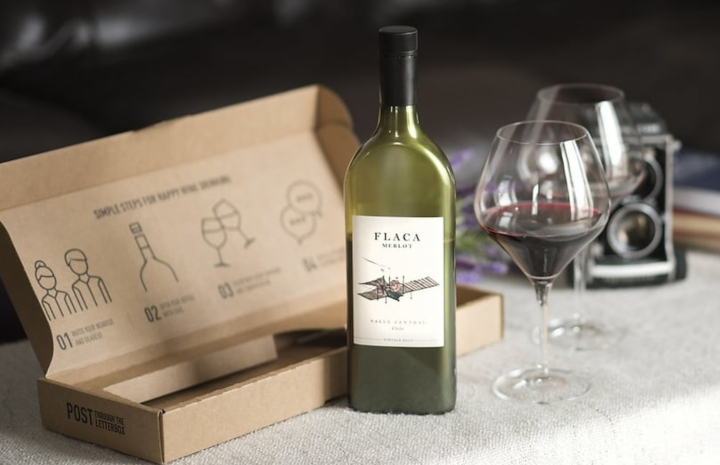 Luttenberger’s collection — which, he boasts, “spans literally every end-use category one can think of” — grew over the years as he advanced his career. It started in 1989 when he was the editor of Package Printing & Converting (now Packaging Impressions) magazine. It continued through his tenure at Packaging Strategies and surged more recently in his current role as global packaging director at Mintel, the world’s leading consumer research and insight firm.

He admits his interest leans more toward the design aspect of packaging but says he can also appreciate the engineering side: “I believe my collection reflects both.”

It did — with examples of emerging technologies, like radio frequency identification (RFID), augmented reality, artificial intelligence, and more. Not all the packages were commercialized. Some were just prototypes that never appeared on the market.

His last two faves of all time show a keen sense for delivering consumer delight.

3. “I also love the help brand of health/hygiene products. Again, it is so simple, yet so consumer focused,” Luttenberger says. “Color coding and ultra-simple messaging that succinctly addresses a solution for what ails you, like a headache, stomachache, or sleep aid.” 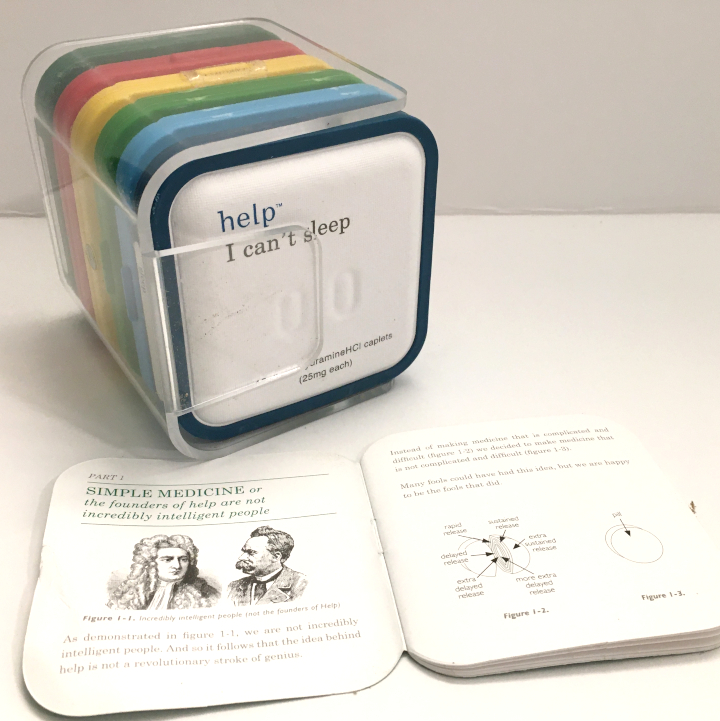 4. This last example is more of a fan favorite: Hera’s flexible eyelash product tube. “When people felt it, and, especially women, learned of the functionality of the flexible tube, they were always delighted and said, ‘I have to have this,’” Luttenberger remembers. “Elegant, tactile, but highly functional. The flexible tube, which replaced a rigid tube, enabled manual manipulation of the mascara, which helped to prevent clumping in the tube, as well as enabled better distribution of the product on eyelashes. By keeping the product from clumping in the flexible tube, it prevented the 40+% of waste typical with hard tubes.” 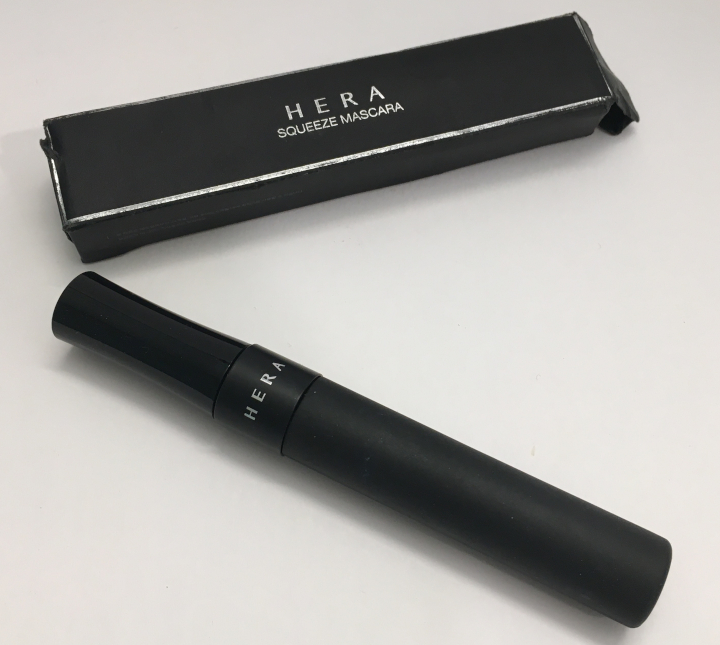 Like most packaging enthusiasts, Luttenberger could “share a hundred other stories about my favorites. But these four really stand out for their contributions to society and the underserved; for their innovative thinking about how to gain access to new channels or how to address consumer pain points (no pun intended, help); and for how clearly consumers saw the intersection of form and function.”

Knowing that über-cool packaging is still out there, how will Luttenberger control his collector’s obsession? That’s an easy — and, come on, predictable — question to answer.

“I have already begun a new collection — or rather, an ‘old’ collection,” he says. “I’ve started to collect antique packaging and already have examples from the 40s, 50s and 60s!”