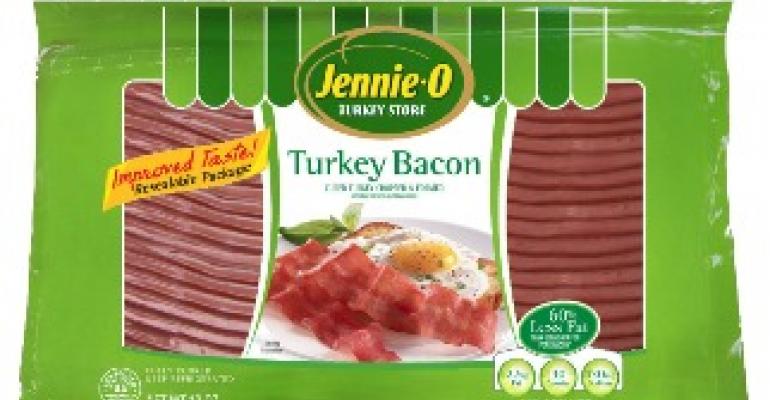 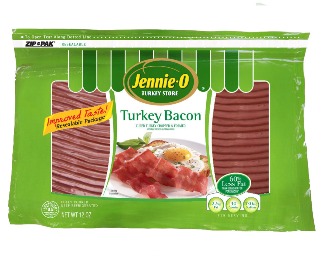 With busy lives, it's often tempting to forego the most important meal of the day-breakfast. Now, Jennie-O Turkey Store is inviting Americans to give breakfast a wake-up call with the launch of its new and improved JENNIE-O turkey bacon, making its debut in stores across the country starting this month. The product makes it easy for a nation of tried-and-true bacon lovers to enjoy the delicious bacon flavor and crisp texture they crave, but with significantly less sodium and fat than pork bacon.

"Jennie-O Turkey Store is on a mission to help the world discover the great taste of turkey. We encourage anyone who wants to give breakfast a wake-up call to try our new and improved JENNIE-O turkey bacon," said Jen Ehresmann, Jennie-O Turkey Store director of marketing.

The new JENNIE-O turkey bacon recipe has improved taste and texture as well as a new zipper packaging to keep it fresh. It joins a full suite of JENNIE-O breakfast products including turkey breakfast sausage links and patties, as well as lean ground turkey.

"When you have turkey or other proteins for breakfast it helps with overall satiety and hunger management-whether you're trying to lose or maintain your weight, or just want to kick-start your day," said Chef Devin Alexander, a health and wellness expert and best-selling author. "Jennie-O makes it easy to create a protein-rich breakfast that can help boost metabolism and keep you feeling full until lunch."

Jennie-O and Chef Devin Alexander have teamed up to create four signature breakfast recipes for every season. These breakfast meals, featuring lean and delicious JENNIE-O turkey products, are a great start to the day. Consumers can find these recipes, and other great morning recipes, on the company website.

Forty percent of survey respondents also listed high fat content and high levels of sodium as their most important concerns when selecting bacon. Younger people were more likely to turn to turkey bacon for a better way to give breakfast a wake-up call, according to the survey.

JENNIE-O turkey bacon: less sodium and fat
New and improved JENNIE-O turkey bacon has 60 percent less sodium and 60 percent less fat than conventional pork bacon, according to USDA data. Per serving, sodium has been reduced from 340 mg to 130 mg. The product contains no MSG, no high-fructose corn syrup, no artificial sweeteners, no trans fats and no partially hydrogenated fats. It is gluten-free.
The delicious turkey bacon is now available in stores across the country, including Walmart, Save-A-Lot, Publix, Ralphs, Harris Teeter, Wegmans, Winn Dixie, Cub Foods, Roundy's, Albertsons and many more. Suggested retail price is $2.99.

Make the Switch. Inspiring Americans to try turkey.
The launch of new and improved turkey bacon is part of an ongoing campaign to help the world discover the great taste of turkey and amplify awareness of the JENNIE-O brand. Based on the idea that people would be interested in switching to lean turkey if they had a chance to try the company's products in a familiar environment, Jennie-O has gone to high-profile locations in Los Angeles, New York and Boston to show the world the great taste of turkey.

Recently, Jennie-O also helped the residents in the peaceful village of Sleepy Hollow, New York give breakfast a wake-up call. In appreciation of the village lending its location for filming the company's new breakfast television commercials, which will begin airing in mid-September.