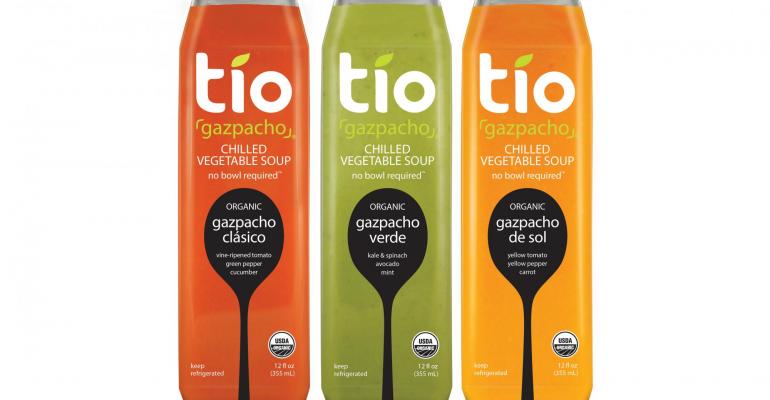 This summer the category-creating chilled soups from Tio Gazpacho debuted a redesigned shrink-sleeve label to improve their shelf appeal.

During a four year stint living Spain in the early 2000s, company founder Austin Allan fell in love with gazpacho, a specialty soup made fresh using raw ingredients and served cold. After working in banking for a number of years he founded his company in 2013 to make and market gazpacho in the US. A few challenges and some months later, the company launched Tío Gazpacho chilled soups in shrink-sleeved PET bottles in late 2014.

A lot has happened along the way.

“Gazpacho was the starting point,” says Allan, whose official title is totally important officer. “I wanted to redefine soup and make it more accessible, and that means drinkable and chilled. Putting soup in a bottle to make it conveniently drinkable is a game changer.”

On the formulation side, he adapted a classic gazpacho recipe for an American audience and developed two others that he says “are not classic gazpachos, but are tailor-made for consumers looking for healthy products that still taste good.” All three products are vegetable soups naturally colored red, green or yellow by the key ingredients found on the front label.

The soups push the hot buttons of on-the-go, convenience, health, organic and vegan. “People are looking to eat less meat, eat more vegetables and want a clean label—and this is right up their alley,” says Allan.

The bottle shape and the processing method took their cues from those used for cold-pressed juices, which are made using High Pressure Processing (HPP).

“I thought it was an interesting concept and tried HPP juices,” he recalls. “The taste was amazing, especially compared with heat-pasteurized products. I wanted the best tasting, freshest product possible, and HPP was really the only option for me.”

In order to make it ready to drink, Allan assessed various package options including aseptic carton, glass bottle and even a bowl.  The use of HPP eliminated certain package formats and narrowed the field to a package that he says people responded to best: A clear plastic bottle. Allan preferred the “tall, elegant” PET bottle common for cold-pressed juices.

“We found early on that it’s not necessarily more expensive to have HPP-compliant packaging, you just have to find it,” he points out.

Allan considered different sizes, opacities and shapes before settling on a stock clear PET bottle sourced as of September 2014 through Zuckerman Honickman.

Starting in November 2014, the bottled soups were processed using HPP equipment from Hiperbaric installed at contract packager FreshBev in Connecticut.  Done in batches in a water-filled hyperbaric tank, the bottled soups are subjected to approximately 80,000 lb per square inch of pressure. That destroys any organisms while retaining the product’s consistency, flavor, nutrients and quality.

“I met with Hiperbaric when I was still like making samples in my kitchen,” says Allan. “They were so supportive and provided a lot of guidance. They truly believed in what I was doing, which was also instrumental in my decision to select them.”

The bottles are sleeve-labeled post-processing using 50-micron PETG labels converted by DWS Printing Associates, Inc., which represented a change in suppliers. Offering a 76% shrinkage, the labels are flexo-printed in four colors on a 10-color Omet Srl  Model X6 press that DWS installed this year. They are currently supplied precut rather than in standard rollstock to FreshBev per the copacker's request.

"They’ve been really phenomenal,” says Allan. “DWS helped us make a few changes to the label [noted on the next page] and it looks beautiful.”

The packaging design, particularly of the shrink-sleeve labels, was handled by Element18 Design. “I told them my vision and they responded with the great idea of the spoon—something simple that emulates what the cold-pressed juices are doing, but indicates that this is something different,” Allan explains. “They responded with about a dozen different designs, each better than the one before.”

The change in an HPP copacker had signaled not only a change in geography for processing, but also for distribution. The product was tested in Miami starting in late 2013 and throughout 2014 until November 2014 when the soups officially launched in Florida. That was followed by New York City in February 2015, a move that positions the company for expansion into the Northeast and Mid-Atlantic regions.

The soups are found in natural and organic grocery stores including Whole Foods and high-end grocery stores like Kings Markets in New Jersey and Balducci’s Markets along the East Coast, according to Allan. For customers in the New York and Philadelphia areas, the soups are available through online grocer, FreshDirect.com, which Allan calls one of its best customers. 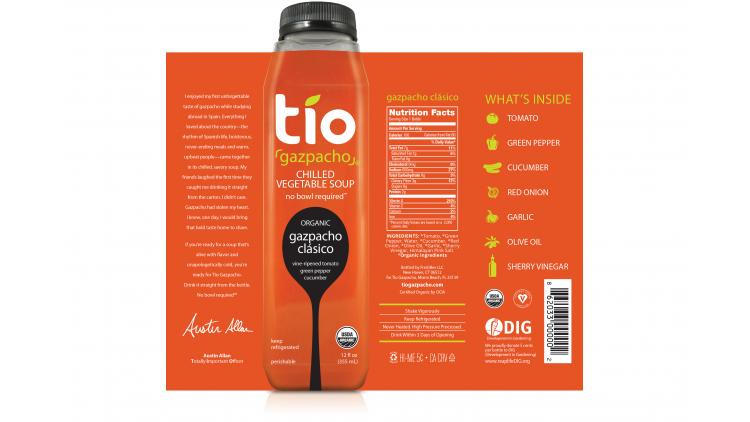 An unwrapped rendering of the redesigned label shows the soup’s clean-label messaging and other key elements.

After months of on-shelf experience, Allan came to the conclusion that the bottles, wrapped in transparent shrink labels, should be made less transparent. This would to address the fact that these were natural, light-sensitive products with batch-to-batch variations and results that were not always aesthetically pleasing.

That called for a label design change.

“Consumers are accustomed to highly processed, homogenous products,” Allan explains. “Starting in June we had the shrink label converted with the product’s key color—red, orange or green—printed on three of the wrapped sides while leaving the back transparent. Consumers can see that it’s a fresh and delicious high-quality product on the back, but it’s protected from the light on the other three sides. It also jumps off the shelf a more with the printed color versus the organic products’ natural, somewhat dull blended color—we use no dyes. The response has been positive because there’s a nicer presentation on shelf.”

It’s on-shelf where the unique brand also faces the hurdles of merchandising and consumer education, which are the biggest of Allan’s challenges.

“In effect, we are creating a new category with soup in a bottle and have to create a place for it in a supermarket,” he says, noting that stores’ tendency is to put it with juices “because it looks like a juice, but it’s not. We’re adamant about locating the products near salads or sandwiches or grab-and-go items. Tío Gazpacho is filling and it’s convenient for when you are hungry and don’t have time for a meal.

Having this unique packaging for soups is great, but it is a challenge as well.”

What’s been learned and what’s ahead

What about the products’ reception?

“Once people try it, they love it,” Allan responds. “We’ve had a pretty aggressive in-store demonstration program. People sample it and then buy it. There’s nothing out there like it, it’s really unique and we’re finding a lot of repeat customers who are telling their friends—it’s growing organically through word of mouth.

And the retailers are happy because it’s a unique, premium product with a nice profit margin for them.”

What has he learned about packaging?

“I’ve learned about the basic difference between aseptic packaging and hot-fill and cold-fill and HPP and pasteurization using preservatives and how all that relates to packaging,” he responds. “That has made me a smarter consumer, too.

“People ask me if I can sell it in a glass bottle, but I say no, because glass can’t withstand the HPP process.”

Allan considers the product and its packaging a work in progress. He is already looking at changing from a stock shape to a bottle that’s a little more customized, “just to make it my own, perhaps using a slight variation of this bottle. We’re small and can’t do everything exactly how we would like it, but we expect to grow and can make some changes.”

Also in the works are additional products, typical and atypical, to be launched by the end of 2015.

“We plan to launch one more gazpacho and then an additional three SKUs that are still in development,” he tells us. “They will also be drinkable, plant-based soups, but they will probably be more like a bisque or broth.”

Allan points out there are packaged gazpachos commercially available in Europe, but Tío Gazpacho is distinctive from those, too, in that they are all heat-pasteurized. “That cooks it, though by definition gazpacho is a soup made from raw ingredients and served chilled. It just doesn’t taste like gazpacho once it’s pasteurized.”

That was in contrast to the restaurant versions made-from-scratch and served cold that he loved and has tried to emulate.

“The beauty of HPP is that it never heats the product, so it still tastes raw and fresh. People ask me all the time, ‘how do you do this?  It tastes like it was just made.’ That’s because it uses HPP.  At events, I’ve had Spanish people say to me, ‘this tastes like my grandmother’s gazpacho!’ That’s the ultimate compliment.”

Lastly, we asked when he expected that major brand owners might get wind of what he’s doing. “They already have because I’ve had meetings with them.”

For more on HPP processing, see the PD article Performance under pressure.